previous
Check out an extended first look at The Walking Dead: The Telltale Series - A New Frontier
random
next
Sony announces first mobile games for 2017 at event including Everybody's Golf and Wild Arms
0 comments

Building in games and leaving your mark on the world 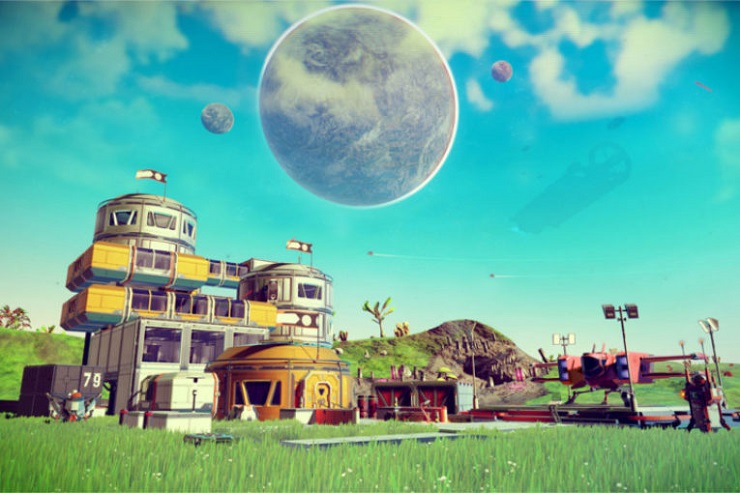 With the launch of the first update to Hello Games’ controversial No Man’s Sky adding the option to build bases, it got me thinking about why the experience of No Man’s Sky initially felt hollow to me, and that was that there was very little purpose to you being in the world. You had no real impact on anything there. Sure you could catalogue the flora and fauna and upload it to a database but the chances of anyone finding something you had claimed and named were so small, according to the developers, that after the first few planets I stopped thinking of amusing names for the monstrosities I found.

You could interact, albeit with limited success, with some of the aliens you located on outposts but those interactions were fairly few and far between, and were limited to stilted conversations or trade deals. Perhaps one of the more interesting aspects of the things you could find on the planets that make up the universe in No Man’s Sky were the ancient artefacts that you could interact with to learn a little more about the culture that had been there before you. These structures were often huge monoliths that had unknown purpose and origin, but again they served little more than a distraction for a few minutes while you roamed the planet’s surface looking for resources. All in all, it lacked a bit of purpose and direction. Perhaps that was the point, that No Man’s Sky is really an elegy to existentialism, but I have enough of that in my own life – I wasn’t particularly interested in exploring it through a video game. I’ve recently tried the game again with the new expansion and while I think that the game still has some way to go to deliver on the promise of what it could be, I do think the additions are for the better. The base building is crude and rudimentary, but having a safe haven from which to go out and explore the planet and solar system and further should you wish is a particularly meaningful thing, at least for me. There is something comforting to be had in the knowledge you have built something that keeps you safe from all the dangers your home planet throws at you. And like those ancient monoliths, I kind of like the idea that someone may well stumble on my home planet at some point and see my structure and wonder what types of adventures I’d been on. Minecraft gives me a similar feeling. I love the game with a passion, and it is perhaps my most favourite game. It can be lonely though; in single player you are totally alone in an often very beautiful world. In survival mode it’s crucial that you build a shelter to protect you at night time when the monsters come out, but for me, it isn’t enough to just build a simple house. I always end up building huge monuments to my vanity and shaping the land around my base in the way that I want it.

I have sunk many, many hours into it, playing both survival and creative mode. The building in Minecraft serves to scratch my creativity itch where I don’t consider myself a particularly creative person. I’ve pored over YouTube videos and looked at scores of images for building ideas on the internet. I have built massive glass fronted bases into the side of a mountain, an underground house complete with a dome roof, huge gothic style mansions, igloos, swamp houses on stilts, towers, treehouses, great lion statues, a dragon’s head. I love the creativity of the community, and one of my favourite things about the game is playing on a multiplayer server and wandering around looking at the creations people have built. Another game I have become heavily invested in because of building is Fallout 4. This time you wander the Commonwealth picking up junk that in turn becomes useful materials for rebuilding settlements. It’s a clunky mechanic, but one that I have sunk roughly thirty hours of my time into. For me, it’s one of the best aspects of the game.

In an open world game like Fallout, it’s sometimes difficult to feel totally engaged in the world. Sure, the quests that you complete help you to rise through the ranks and artificially inflate your sense of importance in the world: you’re the leader of the Minutemen. You’re the hero of the Railroad – the saviour of Sanctuary, but I never felt that connected with what I was doing, or that I was ever making a difference to these people living through the unimaginable desolation of nuclear destruction. The simple fact I could build something that directly benefitted the people that inhabited the world of the Commonwealth made it something special. I created a community in Sanctuary; each individual I originally rescued from the nearby town had a space to call their own. I tasked them with jobs to aid the community they were building. Crops were planted, and over time I brought power back to that small group of survivors.

Later, I ventured out further and created a huge community at Sunshine Tidings Co-op. I set up a beacon that broadcast the area as somewhere safe and protected, where people could head to, where there was food and water and somewhere safe to sleep at night. Trader stalls were set up and defences were built. Sunshine Tidings Co-op is now a thriving community of near 20 people; there is plenty of food to go around, and the community has successfully defended numerous bandit attacks. I’m almost proud of what I’ve created there. There have been many more games out there that have incorporated building that have had me hooked, and all of them seem to share a common theme; that creating something within the confines of someone else’s creation is an enormously satisfying mechanic for me. It allows me to feel more connected to the world and in the case of Fallout, have a direct impact on the characters that inhabit it.

Likes to shoot stuff and wear pretty shoes. Is a BEAST at Titanfall.
MORE LIKE THIS
Fallout 4MinecraftNo Man's Sky