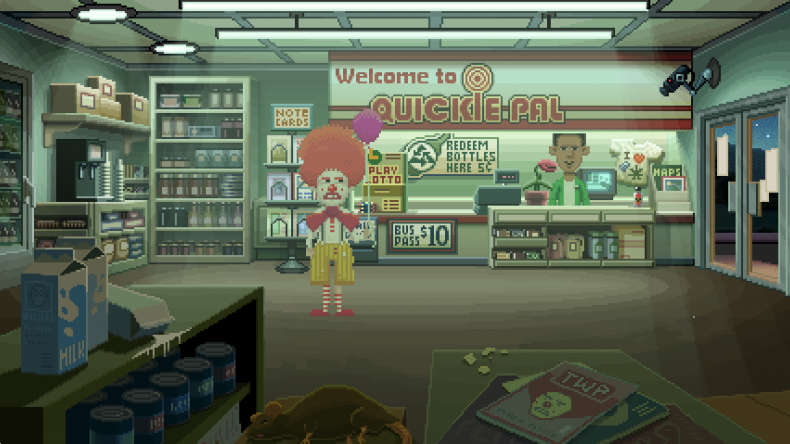 When I was asked to check out Thimbleweed Park, I wasn’t entirely sure what to expect. We’ve all heard of adventure games like Monkey Island and Maniac Mansion, but over time, these classics have faded to exist only as fond memories for a seemingly ‘older’ generation. The problem that many fans of the genre will discover is that their treasured memories of their favourite adventure game are most likely somewhat rose-tinted, and booting up the same game today may be slightly disappointing, albeit nostalgic. Thimbleweed Park has been created by a small group of people that want their game to include all the best bits of the adventure games fans love, without the dated constraints of the time in which they were made.

The preview build introduced me to two playable characters: Federal Agent Ray – a sarcastic Lady who has devolved into a cynical old soul as a result of years in her field, and Federal Agent Reyes, a fresh-faced cop eager to impress. Players will be able to switch between five main playable characters, all of whom will receive different responses when speaking to each of the game’s many NPCs. Certain puzzles may require a specific character or, in some cases, multiple characters to aid in completing a task. However, for the most part it’ll be up to players to pick their favourite. One thing that Thimbleweed already does really well is not take itself too seriously. Characters will frequently make jokes that break the fourth wall, which set players up to have some cheesy and fun conversations. For example, one of the characters applies for a job at ‘Mmucas Flem Games’ and early on, one of the characters reassures us that we don’t need to save our game before committing to an action that seems a bit risky. From what I’ve seen so far, the game sustains a purposely over exaggerated chirpy tone and takes pride in including a seemingly endless stream of dad-level jokes. These jokes will keep players as equally engaged in the story as they are cringing. Basically, if you love terrible jokes that cover anything from everyday life in the 80s, to oddly specific themes such as ‘postal jokes’, you may want to check this out! Although, don’t let this cheesy tone put you off, either. Thimbleweed offers two modes: Casual, for those of us that want to avoid particularly monotonous tasks and Hard, for players that want the full adventure experience. Think of this as the difference between simply finding the item that you need on a table, and having to create that item before being able to use it. It’s therefore safe to say that players will have plenty to do, as this game has such an incredible amount of detail and depth. The creators have also added some truly unique personal touches for those that helped to fund Thimbleweed’s development.

If you’re not already aware, Thimbleweed Park appeared on Kickstarter around two years ago, where it has since acquired over 15,000 backers. Creators Ron Gilbert and Gary Winnick (along with a small team of others) have included a staggering amount of content that thanks their backers for their support. Thousands of books titled by individual backers have been added to Thimbleweed’s Library and Occult Book Store along with other in-game items. There’s a phone book where backers’ names are listed and some of them have even recorded a voice message for players to listen to! The detail and care that has been taken to make this game feel like a personal adventure is quite surprising and from what I have seen, pretty unique. I think fans that have invested in the game will really appreciate this as it gives the game such a rich feel. Of course, some people won’t be as heavily invested in the game and that’s cool too! There are still other aspects to be excited about, particularly how Thimbleweed brings the adventure game style into the twenty-first century. The creators have implemented a number of features to streamline the experience, omitting the issues that we would encounter with older adventure titles. Rather than having to guide your character to a door, then selecting ‘Open’ before moving through it, players can simply right-click to move to an object and interact with it. A lot of the time, players will still have to select their action from the list at the bottom of the screen, but it’s nice that there are options to speed up some aspects of the game. Characters also have two walking speeds, so moving around town is quick and easy. In addition, as Thimbleweed will be releasing on the Xbox One, there will be controller support where a few actions can be mapped to the buttons and triggers on the pad. I’m unsure how natural the port to Xbox One will feel though, as these games traditionally require a mouse and keyboard. When playing any adventure game, you have to remember that you’ll interact with objects differently to other games. I think that other mindset of play is very apparent in Thimbleweed and will certainly take players that are new to the genre some time to get used to. Rather than holding ‘E’ like you would in a game like Fallout 4, interacting with objects is more specific and true to the adventure genre in this game. At points, you may have to repeat an action three or four times to see a result so it’s worth bearing in mind that although the game does strive to break some new ground, it still sticks closely to its roots.

Overall, I’m really excited to see more of Thimbleweed Park and I hope I’ve given you a good idea of what’s to come while keeping the game’s story intact. This may be a 2D adventure game with a familiar feel on the surface, but its personality and updated style are showing signs of a strong new approach to an old genre. I can understand how this may not be to everyone’s taste as it is still an adventure game with traditional controls. Nonetheless, I think point and click fans will appreciate how the creators are trying to amalgamate their favourite parts of a previous era with the high expectations that we have of games today.

The Cave Coming to iOS Devices on October 3rd