9 tips to help you in The Legend of Zelda: Breath of the Wild 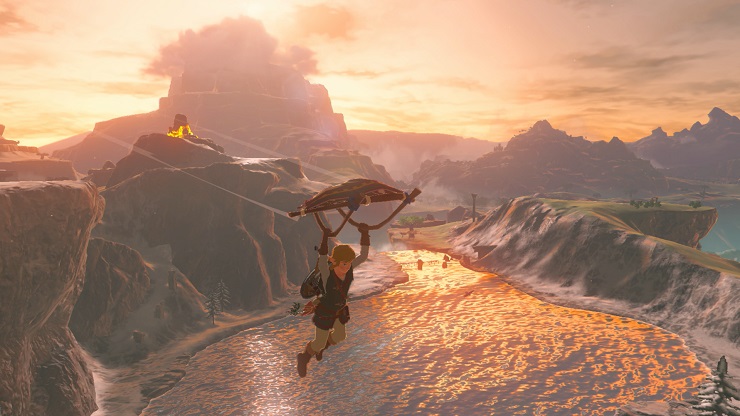 The Legend of Zelda: Breath of the Wild is massive and beautiful, brimming with surprises and charm that will have you mesmerised throughout. In an ideal world you’ll play the entirety of it without the need for guides, just discovering at your own pace as you explore the stunning world, but sometimes we all need a helping hand. BOTW can be surprisingly tricky at times, so here are nine tips to get you on your way.

You owe it to yourself to really take in this beautiful world that Nintendo has created. Not to just run about from one objective marker to another, no, you should really take your time and *ahem* breathe it in. The open Hyrule has surprises and wonder in nearly every nook and cranny, but if you’re only ever making a beeline for the next place you may well miss it all altogether. I recommend going into them there settings, before you even begin, and turn your HUD settings to ‘Pro’. This will get rid of everything on the screen except your hearts. This means you’ll be without the minimap, temperature gage and noise meter. Trust me, you won’t regret it.

If you’re like me then one of the things that excited you the most about the Breath of the Wild trailers was your boy Link surfing down hills and mountains while standing on his shield. Let me tell you, it’s just as cool as it looks and helps you to cover great distances in no time at all. Surfing is really easy, and once you have a shield of any kind you too can begin to shred the hills. Gnarly. When you have a shield hold LZ to get out, then press X to jump, and while in midair press A and you’ll stand on your shield. The steeper the incline you slide down the faster you’ll go. Be wary, as shields can break and surfing on them will weaken them. Cooking is an activity you probably didn’t think would mean that much before playing BOTW, but as soon as you start finding different recipes and rustling up some fine scran you’ll soon get addicted to it. Thankfully it’s a good addiction to have, as cooking is going to help you massively in your quest. Food in BOTW is how you replenish your hearts, but they can also offer stat boosting effects. Cook with hot peppers and the result will make you resilient to cold weather, cook with Stamella mushrooms and the result will refill your stamina meter faster, and there’s countless more buffs for you to discover. To cook simply find a lit fire that has a pot over it. Then go to your inventory and find all the ingredients you’ve collected. Pressing the X button will allow you to select up to five ingredients for Link to hold. Once you’ve selected what you want leave the menu and then press A next to the fire to cook. The ingredients will be thrown into the pan, they’ll dance about and make lovely sounds, and then five seconds later you’ll have some tasty grub.

Sailing on a raft is really the only way to travel vast differences over water. Swimming quickly reduces stamina and if you run out while in the water, Link will sink to the murky depths and end up back on dry land. So you’re going to need a boat, but if you’ve stood on a raft you’ve probably noticed that there is no way to sail it on its own. You’re going to need a Korok leaf to generate wind and propel the raft forward. Mercifully, wherever there’s a raft there should be a leaf nearby and a quick look around the immediate area should have it found. Once found and equipped you can go and stand on the raft and press Y, as if attacking a foe, to start making a gale and get the raft moving over the waves.

Stamina is a big aspect of BOTW and you’ll ignore it at your peril. Your stamina meter will run out, at varying rates, when you swim, climb, glide or run. Running out of energy while running isn’t the end of the world, Link will just need a few seconds rest, but it can be perilous in the other situations. Run out of it while swimming and Link will drown. Run out of it while climbing he will fall, and if you’re high up then he will fall to his death and that will be a lot of time wasted. Run out of it while gliding and you will fall from the sky like a stone. So you really should keep an eye on your meter and be sure to not over do it. When swimming and climbing you can use boosts to go faster, but these use up big chunks of energy. I’d only recommend using them if you’re absolutely certain you’re going to reach the safety of land. Every weapon in Breath of the Wild is destructible, they degrade over time and eventually they will destroy in a puff of blue sparkles. They usually do this at the most inopportune times and leave you scrambling to get your next weapon ready, which can often be a mop. Lots and lots of different items can be used as weapons, from traditional swords, to anything a foe wields (including their arms, sometimes) and even farming equipment like hoes and forks. With weapons being destructible you should always stock up your inventory to the brim with them, lest you be in a fierce battle without any weapons at all. Stock up with as many as you can and always be swapping your weakest and closest to breaking weapons out with fresh, hopefully stronger ones.

While you’re at it be thinking about which weapon you’re using. When exploring the plains I’d tend to use one of the standard, common weapons whenever I was ambushed by a small gang of devious creatures, and I’d be saving my better weapons for the bigger fish. You don’t want to be wasting your cool sword that does mega damage on something that can be taken out with a soup ladle.

The scope is your friend

As we’ve established in tip number one, you’re wandering around this world without a minimap to constantly tell you which direction you should be heading, and that’s great! But sometimes you’re going to want to be heading directly to a certain interesting thing you’ve spotted. Well, make sure to constantly bring up the scope and use the pin feature. If you spot something that looks interesting from a lofty vantage point, make sure you tag it so you can head straight there or save it for later. Once pinned, a great column of light will shoot from the sky, so you should look for that through the scope so you know which way to walk. Also, the scope is great at, who’d have thought, scoping out enemy camps and seeing what lies ahead for you. In fact, I’d even recommend using it to just watch Bokos from a far. They’re really funny and fascinating to watch. I’m absolutely loving BOTW and I think one of the many reasons for that is because it doesn’t hold your hand at all. It gives you suggestive nudges every now and then, but that aside you’re free to venture out into the world on your own accord. Do and go wherever you want. It presents you with tasks, but it doesn’t tell you how to do them. This leaves the player free to be creative and solve puzzles and quests however they want. The prime example of this was a shrine I came across in which there was a monkeyball-esque maze puzzle. I was getting infuriated as the ball just wouldn’t go where I wanted; by chance I ended up flinging the ball out of the maze and it landed just behind where Link was standing. I used stasis on the ball, hit it three times with my sledgehammer, and then it flew over a massive gap and landed in the hole. Puzzle solved, not how it was intended to be, but solved all the same. There’s room for you to be imaginative and different in BOTW, so improvise, try different things and see what you can do that no one else has.

The snowy mountain tops to the scorching deserts with every luscious meadow in between, Breath of the Wild is simply gorgeous. There are surprises and humour and quirkiness and things you would never imagine hidden throughout this vast land, but none of it will come up on the map – none of it will be given to you on a silver platter. The biggest tip I can possibly give to anyone playing BOTW is to just explore. Don’t worry about completing all the quests or collectibles or anything, just explore all the wonder this world has to offer. It’s an adventure, so make it one.

Features, Guides
GuidenintendoThe Legend of Zelda: Breath of the Wild

MORE LIKE THIS
GuidenintendoThe Legend of Zelda: Breath of the Wild