previous
The latest Overwatch patch adds a game browser as competitive mode Season 4 begins
random
next
Being a dad can be tough, but Horizon Zero Dawn gets it right
0 comments 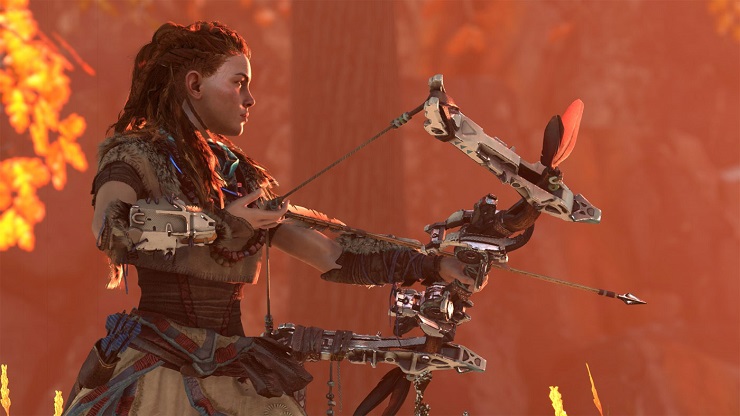 Sony’s highly anticipated new exclusive Horizon Zero Dawn is now out in the wild, and we here at God is a Geek bloody love it. The world is intriguing and original, the machine creatures are breath-taking in their design and rather deadly, and bringing them down with a wide array of techniques is quite fun.

The wild plains and uncivilised valleys of Horizon can be a surprisingly tricky place to navigate, especially with beasts and cultists round every corner trying to end you. So here are eight bits of advice you should heed before leaving the sacred lands and embarking on your journey.

Get rid of the screen furniture

First things first, before even starting Horizon Zero Dawn, you need to delve into the menus. Horizon is a simply stunning game, with some of the best lighting ever rendered. You could quite easily spend a good amount of time just looking out over the * ahem * horizon and enjoying the view of the rolling mountains. Which makes the screen furniture that’s plastered all around the screen a rather ugly mask over the beauty. I actually found the sheer amount of bars and information that surrounded Aloy to be quite suffocating. So to avoid this feeling you should go into the menus and make sure the UI display is set to ‘dynamic’. This will make all the information, compass aside, disappear when you’re not in combat and it allows you to explore the lovely post-apocalyptic landscape undeterred.

While you’re in the menu you may as well sort out another niggle, too. Guerilla has attempted a new type of waypoint system in Horizon, called Dynamic Pathfinding. This places a waypoint into the world but it changes position in order to give you the quickest route to your destination. It’s a clever idea, designed to guide you round mountains than trying to climb over them, but it’s so flitting and constantly moves that it becomes another unneeded distraction. I’d recommend turning Pathfinding from ‘dynamic’ to ‘off’. Taking on the wild machines of Horizon can be quite tricky at times, especially when you’re outnumbered, but thankfully Aloy has a nifty little gadget that can help out tremendously. The ‘Focus’ is a small piece of technology from the good old days which rests in her ear and is able to scan environments and, more importantly, enemies. Even from a great distance the ‘Focus’ allows you to scan and identify machines, which prevents you from stumbling into a squad of nasty Sawtooths and being ripped to shreds. Its most important feature, and the one that you should be using for every encounter, is that is analyses the machines and highlights weak areas in a golden glow. It will also tell you if a machine has a certain weakness, like fire arrows for instance.  Once you’ve studied you’re ready to wade into battle, and by targeting those exposed areas and using the right ammunition, a tough task becomes significantly easier.

Be a caster master

There are some bloody big foes in Horizon – hulking metal beasts that can squash you like a bug. Thankfully you’ve got plenty of tools to try and bring them crashing down to earth. The bow and spear are how you’ll kill the metal monsters, but becoming a caster master is going to make that much, much easier. There are two different casters in Horizon, the Tripcaster and the Ropecaster. You can get both very early into the game and they’ll quickly become invaluable parts of your arsenal.

The Tripcaster allows you to place tripwire traps in strategic positions, like on an unsuspecting creature’s path, which will trip them up and disable them for a brief moment of time, allowing you to slink in and deal a killing blow on small creatures, and to make significant damage on bigger ones.

The Ropecaster is the star of the show, however, as it not only helps in the killing of monsters but also helps in defending yourself from surprise attacks. You shoot the Ropecaster at a machine and then a rope will tether them to the floor. You can do this a few times to keep a machine restrained and they will stay there until they finally manage to break free or when you deal enough damage. With a machine held in place it gives you enough time to either pick them off or to deal with other machines. I particularly found it useful when I got jumped by a ‘Scrapper’. I was close to dying, but managed to tether the robotic tiger up and leg it before it could finish the job.

Horizon can be a surprisingly tough game at points, and if you want to survive in the wilds you’ll have to make full use of the tools and weapons at your disposal. There is nothing worse than being locked in battle with a dangerous foe or being in the midst of a challenging mission and then, all of a sudden, your quiver is completely void of arrows, you have no traps, bombs or ammunition of any kind left and you’re also all out of health potions. Yeah, you can still fight with your trusty spear, but that means getting up close and personal and, if you’re outnumbered, that means you’re going to be very exposed. It’s a simple one, but make sure you’re always aware of how many supplies you have so you don’t make a battle ten times harder, and always scavenge. You can never have enough wood for arrows or flowers for health, so be sure to always gather them up.

Primarily, Horizon is a stealth game. You’re just one Brave, a very capable one but one all the same, often having to take on gangs of bandits and herds of deadly machines, it behoves you to keep to the long grass and out of site. Watches accompany herds of machines and they will alert them all if they spot you, forcing you to either stand and fight (hard) or, usually, just run away. The best way to go about taking them out is a divide and conquer strategy. Lure a Watcher, or any foe for that matter, over to where you’re hiding then take them out with a silent strike. It’s the optimum way of safely taking out large groups of enemies. If for some reason, say you’re clearing a camp, you need to move from your hidey hole and keep low; press the stick lightly so you move quietly and don’t get heard. Keep to long grass when you can on your approach to avoid being seen and again use silent strikes to get the job done with minimum fuss. This technique is also useful when wanting to avoid the massive, nasty looking sods that roam the world.

Keep on the move

When things inevitably go arie and you get spotted, the chances are you’re going to be outnumbered and outgunned, with archers, bombers, berserkers and machines all closing in on you. When things go wrong the best thing to do is to not stay static in one place, doing so will allow for all manner of projectiles to rain down upon you. Keep the arrows flying, always aiming for weaknesses, but never stay still and be allowed to be pinned down. If all else fails and your health is depleted, there’s no shame in running away and regrouping. Skids and jumps and rolls

When you’re not being stealthy or have no choice in the matter, a big aspect of Horizon’s combat is movement. Aloy is blessed to have an unhuman jump, a lovely roll and also one of the best skids in gaming. You should be using these in combat as often as possible, not only because they’re invaluable in avoiding enemy attacks, but if you aim your bow mid jump or skidding then time will briefly slow down for you to make the perfect shot.

I’ve loved using the skid; not only does it feel amazing as it gives you a little control of direction, but it’s also incredibly badass to skid under a roided robot and deal damage from below and really useful in battle.

If stealth isn’t your strong suit and you like to go in all guns blazing, then you’re gonna need all the help you can get. Make sure fire arrows are stocked and equipped, and when heading into an enemy camp, always try to aim for the green glowing canisters of Blaze. Shooting one will cause a massive explosion of fiery fury that does a great deal of damage, if not killing those near by. Some human foes may even carry said canisters on their backs and yes, watching them explode is very fun.