Ten tips to help you succeed in NieR: Automata 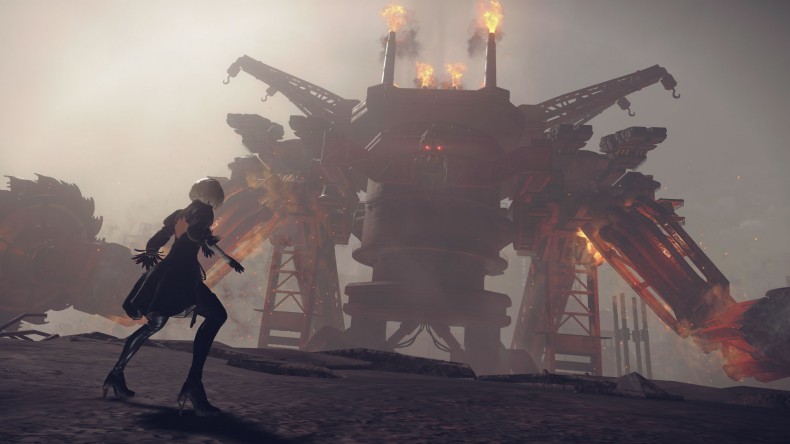 NieR: Automata is out and it’s yet another sublime game from Japan, and this one is just about as Japanese as it can possibly get. It’s weird, quirky and will constantly surprise you in the most bizarre of ways.

This strange world can be daunting when first entering into it, as it’s quite unique, so let these handy tips let you get accustomed to one of the best games of an already stellar year.

Experienced? Turn up the difficulty

If you’re a fan of the exuberant fighting genre or have played a lot of Platinum games in the past, then I’d recommend sticking the difficulty on hard from the offset. I have very little experience of the genre or Platinum, and I’m finding proceedings fairly easy, big bosses aside. I’m well shite at games, so if you’re good at them you’re going to want to turn the difficulty up to get a good challenge out of NieR.

It tells you this very clearly once you start the game, but that didn’t stop me forgetting so it’s very much worth reiterating. Nier does not autosave. Ever. You have to do it on your own, and failing it to do so will result in all your progress being lost. It’s quite annoying, so don’t forget to save and do it often! You can save your game at the stations that are littered around the world and, in certain locations, you can quick save from the pause menu. Save time by pressing down

There are a lot of different items and juggling said items about in the menus can be a pain. The most important of all the items are going to be your health potions, and having to constantly press pause to access them whilst in the heat of battle can break the flow of the liquid combat. Down on the D-pad is a quick use button for your items, setting your health potions to the pad is very convenient and keeps the action moving.

Learn all of the D-pad

Sticking with the D-pad vibe, pressing left will bring up a quick menu in which you can access all kinds of items and things in your inventory. Pressing up on the D-pad will allow you to change to your different weapon loadouts on the fly. All the different menus and what they do can be a little confusing initially, but learning what each of the different buttons do will save you plenty of time and will prevent you from having to break immersion and pause the game.

Network features are OFF by default, turn them on!

The online features of NieR: Automata are off by default, but you should definitely turn them on and see the cool little things they do. It’s not overly intrusive, but they can provide nice benefits. When you die in NieR your lifeless corpse can be found where it fell by players in their own games. If they find your body they can pray over it, which will refill your health meter. If you happen to come across a stranger’s body, after praying, you can choose to either take some loot from the body or revive it so it becomes you ally and helps you in your efforts. It’s cool and quirky, just like the rest of NieR.

When fighting a whole host of evil robots or just one particulalyr tough foe, a good way to constantly do damage and keep on the attack is by always having your pod shooting. You can lock onto an enemy by pressing L2, so you don’t have to mess about aiming, and then keep hold of R2 to rain a neverending stream of bullets down on your enemy. This will help you to continue to dwindle enemy health down even if you’re dodging out of the way of attacks or catching a breather. Be sure to always throw in the occasional L1 powerful beam every now and then for a more powerful shot. With the shooting in mind, it can be quite tempting, when you’re surrounded by red eye robots who are raining fiery balls of death down upon you, to start shooting and spin the right stick around so you start spraying out shots in all directions. I’d advise against this approach, as you end up not hitting an awful lot and even if you do manage to hit the target, one shot isn’t going to do an awful lot. It’s much more effective to just focus on one enemy and go through them one by one.

Your biggest asset in combat, well aside from the massive flying swords, is 2B’s dodge ability. You may not realise the ability is there at first, as it’s mapped to the same button as the boost, R2, but now you do know about it! You have to time it perfectly, just as the enemy is about to strike you, but when you dodge 2B will teleport out of danger in an explosion of sparkles. Dodging the attacks then leaves you in a great position to counter attack and deal a great amount of damage to your adversary. Mastering the timing of dodges is the best way to get through battles quickly without taking too much damage. There are power chips that can enhance this ability and it’s certainly worth investing in it.

The slick and impactful combat in NieR is bombastic and a total spectacle. It’s brilliant and thrilling. The most fun I had when in combat was experimenting with my button combinations. You can map a different weapon to each of the Square and Triangle buttons, and hitting these buttons in different orders and combinations can create a whirlwind of devastation for unfortunate robots. Combining these moves with jumps and finishers and strafes and dodges can lead to some devastating and bad ass moves.

Don’t skip the side missions

A lot of the side missions in NieR may just seem like your standard filler: fights, escort missions, fetch quests. But oh my, they are so much more. Yeah, they may be, in essence, nothing new, but the weirdness, humour and pure character you get from them really makes them worth it. The depleted Earth of NieR is a very eerie, melancholic place, but these little asides of hilarity really do show that positivity can be found in the darkest of places. I don’t want to spoil any of them, because they’re all great in their own way, but you should definitely take the time to take them all in and really enjoy this weird and wonderful world.