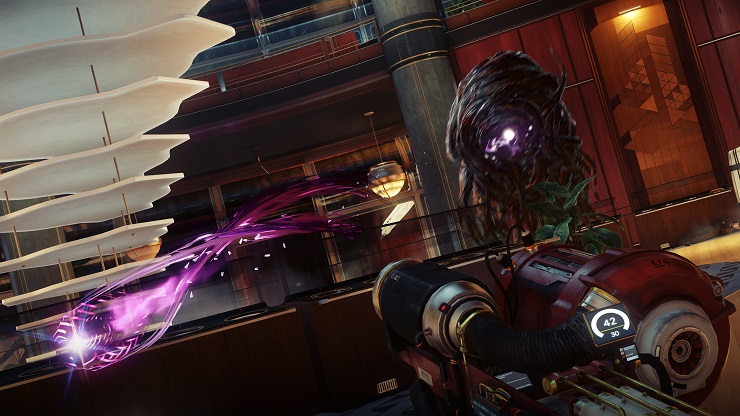 The more I see of Prey, the more impatient I become about its release on May 5th. I’ve now attended two preview events for this game, totalling around two and a half hours, and after both events, I’ve left with the same impression; this game is going to be fantastic. I feel incredibly lucky to have caught glimpses of it before its release, but at the same time, I feel slightly gutted that I won’t be starting the game completely fresh. We have less than a month until Prey’s release and if you’ve managed to dodge all gameplay videos and early impressions so far, keep going, I promise it’ll be worth it. Nonetheless, if you’re as excited and impatient as I am, read on. There’re a few new things that I think you’ll want to see. If you’re still with me, you’re probably already familiar with Prey. However, for those that are not, Prey is a first-person action-adventure game developed by Arkane Studios. Releasing over a decade after the original Prey, this “reimagining” is set in 2032 aboard the Talos I space station. Players will assume the role of Morgan Yu, a test subject in a string of mysterious experiments, but from what we’ve seen so far, all is not exactly as it seems. It appears that Morgan is more heavily involved with the experiments than we’re initially led to believe, but we’re kept in the dark about this due to a nasty case of amnesia. All we know is that Morgan is a scientist and he/she is the first human to be enhanced with an array of unique abilities. Unfortunately, Prey’s story is still as murky, if not even murkier than before. It seems as though Bethesda and Arkane are intent on torturing us by only allowing a few cryptic lines of dialogue to pass between Morgan and Alex Yu in the most recent playthrough. I was slightly dubious about Alex before, but I’m now even beginning to consider Morgan’s motives. “I wish you were with me, Morgan. Not the way you are now… the way you used to be”; “…You moved my chair without touching it. It gave me chills. The possibilities. You became something… new that day. Something higher. I knew then, as I believe now – that our mission is to lift up all humanity in the same way”. Now if that’s not a high aspiration, then I’m not sure what is, but what is more concerning is whether Morgan has the same ideals. Alex is spinning it as if Morgan does, but we still can’t be entirely sure. Thankfully, we’ve gained a little more clarity on some of the ‘higher’ abilities that players will be able to acquire throughout their playthrough, although many of these were still locked off. Up until now, we’ve seen some of the ‘human’ stats that can be enhanced using Neuromods, however, I was able to take a look at the alien abilities. Separated into ‘Energy’, ‘Morph’ and ‘Telepathy’, these abilities have been extracted from the Typhon – which is incredibly exciting when you consider how strange those enemies are. In the accompanying video, you’ll be able to see the Kinetic Blast briefly in action. This power creates a physical blast that deals up to fifty damage at first (there will also be an upgraded version of the power). The Kinetic Blast will also push enemies in the target area back by a few metres. This ability looks as though it’ll be quite useful from the moment players acquire it yet there are also a few other abilities that are worth mentioning, too. The Mimic ability will enable players to camouflage themselves by taking the form of nearby objects. This will be vital for stealthy players and will most likely be quite fun to play around with. Combat Focus will slow down time for Morgan, which will enable players to respond to enemy attacks much quicker. As I made my way through the game, I also unlocked a number of other possible abilities. Some of these included Backlash, which creates a shield that blocks the next enemy’s attack and repels them, and Phantom Genesis which summons a Phantom that will fight for you from your human corpse. In the recent demo, we were introduced to one of Morgan’s inventions: the Psychoscope – a high-tec piece of headgear that measures alien organisms’ brain activity. Once you pick up the Psychoscope, you’ll have the power to identify enemies, discover new alien powers and, as demonstrated in the demo, access new areas in the space station. While wandering around on the space station, players will also be able to use a selection of other items that will make their time in Prey just that little bit more enjoyable, not to mention, easier. Crafting ammunition for weapons and medkits has been made possible thanks to the Fabricator, which can then be paired up with the Recycler (which breaks up objects into smaller materials). More weapons have also been unveiled such as the Huntress Boltcaster, which won’t be very useful against Typhon, but can be used to open doors and distract enemies. I also picked up an EMP Charge, which releases an electromagnetic pulse when detonated, and a Nullwave Transmitter which counters Psi abilities used by Typhon. Typhon Lures, or ‘Nightlights’ will be greatly sought after as they’ll prove to be instrumental when setting traps for enemies. While I spent a lot of time wandering through the space station eliminating enemies and scanning just about everything that I could, I also had a few objectives to fulfil. My main objective was to reach the Gravity Utility Tunnel System (G.U.T.S) which will give Morgan access to other parts of the space station. On the way to the G.U.T.S, I encountered a selection of enemies, from tiny mimics to far more intimidating Phantoms. Some of them even had familiar names such as Crispin Boyer and Helen Barker-Combs. I spent a lot of time exploring the Psychotronics Lab and eventually stumbled across a live experiment that I was encouraged to finish. This resulted in me summoning a rather frightening Phantom. I also found another human, which to my surprise, was still alive and had been kept prisoner, most likely to undergo more experiments. As players make their way through the station they’ll encounter many corpses, along with tapes recorded by the scientists that previously worked in the labs. So, as you can imagine, finding another human was somewhat comforting and I immediately released him, although players will also have the opportunity to perform some of the experiments before releasing or killing the prisoner. Despite only scratching the surface of what Prey has to offer, I’m dead set on purchasing the game day one. I’m aware that some fans of the original Prey are disappointed with how different this one will be, compared to the original, but I still think a lot of people are going to really enjoy it. I’m excited to acquire more alien abilities and finally gain a bit more clarity about Morgan’s intentions and personality. I’m impatiently counting down the days until May 5th and after reading this, I hope you are too.