previous
The Banner Saga 3 will be the darkest, most intense game of the trilogy
random
next
Syberia 3 launch trailer released
0 comments 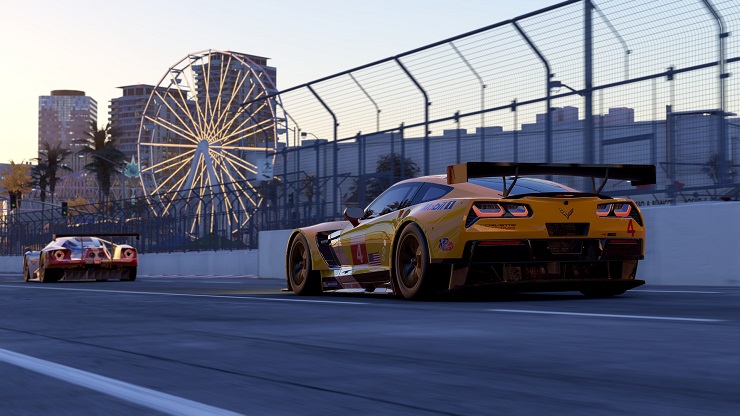 Project Cars 2 is going to be the most realistic driving game ever made. That’s what Bandai Namco says. That’s what race car driver Nicholas Hamilton says. And that’s what God Is A Geek says?

Bandai Namco recently took the covers off Rallycross, the Project Cars 2 mode that fires a warning shot across the bonnet of racing rival Dirt 4. It puts the spotlight on rallying, with cars slipping and sliding their way across loose gravel and dirt.

I played Rallycross and good lord it is difficult, in the sort of way that makes you want to go back to playing Micro Machines. Rallycross is a demanding mode that demands tunnel-vision focus and feather touches on the brakes.

The slightest whiff of aggression – even think about taking a corner at speed let along doing it – and you’ll end up spinning your way into the walls dotted around each corner, dejectedly reversing your way back onto the track.

Nicholas Hamilton takes a break from setting record times in Rallycross to sit down with us, explaining how he’s brought his racing car driver pedigree and experience to the sequel following his work on the original. “With Project Cars 1 we didn’t have it 100%,” he explains. “We struggled whenever you hit a curb. You’d lose the car, we didn’t really have the ability to control slides. Now the tyres feel more alive – you can feel the limit. The car rides the bumps and kerbs are a lot better. It’s not as snappy and aggressive. So that’s what I thought we missed from Project Cars 1 and we’ve put towards Project Cars 2. It’s what makes Rally Cross, with all the loose dirt and gravel, a lot more rewarding. Because we have that base physics feeling on track, so we can put it in the off-road sort of stuff.”

Project Cars 2 is a game that demands a light, light touch. That touch has to be even lighter for Rallycross. You can feel the difference with each surface and some tracks will even change the surfaces as you race, going from gravel to tarmac and vice-versa. As with all racing games, Project Cars 2 is an exercise in constant micro-adjustments – bringing your steering under control, watching your speed, preparing for the next corner.

But realistic? It’s hard to tell when the only comparison you have is the 3pm drive to Tesco in a Vauxhall Zafira. But it feels hard enough than it probably is.

And then you have the VR support which makes it even harder and almost scary to race, your view bobbling around as your car rattles over gravel, tyres desperately spinning trying to find grip where they can. And motorsport drivers use it to develop themselves and develop their skills for driving. So if we’re going to Le Mans next week, or something like that, we can get in the car in Project Cars and learn the circuit and learn the handling and be better prepared. That’s what we wanted to achieve with this game.”

SO HOW REALISTIC IS IT?

Again, the question of realism pops into my head.

It’s hard to say how realistic it is without getting behind the wheel of a real race car and flinging it down gravelly hills for the weekend, something that wouldn’t be possible without giving my family/doctor/insurance company a heart attack. So it makes more sense to ask Nic. Given you race cars for a living, how much do you have to adjust your technique to play Project Cars 2?

“That’s what I’ve tried to make sure we don’t do. Because in a lot of sims, if you do a lot of sim gaming, you can jump into any simulator and be fast because it’s a sim. And every sim sort of feels the same. For me, that’s what sets us apart. That’s what I’m so proud of. You have to jump in and learn how to drive and act and react and be like a driver. And I think that’s what is most important with a simulation game. So we’ve tried to move away from it feeling like every other simulator out there. We wanted it to feel unique on its own and every car to feel different.”

Pretty much every car is hand-built. Every car you drive feels completely different to the other car you’ve just driven. Whereas Gran Turismo, you jump into a car and it feels the same as the previous car, it’s just set up different that makes it feel different. It’s general physics that make it feel the same. For us, it’s different. And that’s what I like about it.”

In other words – yes. It is realistic.

As a final question, I decide to ask Nic what his advice is for new Project Cars players, seeing as he’s so good at racing in real life, in pretend life, in every form.

“It depends what discipline you’re thinking. For me, the biggest advice I can give is anyone who is starting to drive is… slower is faster. When you’re learning a circuit or a car, it’s always better to brake earlier. Think of the corner in three stages – entry, mid-corner and exit. You always want to brake in a straight line, get off the brake, and roll the car through the apex of the corner.

“A lot of people… I’ve seen so many people accelerate, accelerate, drag turn through the corner and they haven’t slowed down. You know? You wouldn’t go to a roundabout and not slow down would you? You’ve got to pull yourself back and be as smooth as you can.

Think of it as a 50p piece. If you’re really jagged with your steering wheel, you’re going to upset the car. Keep the wheel as straight as possible. The more turning input, the more the front tyre will scrub and the rear will rotate. So be smooth and calm. Start slow.”

So there you go. Be smooth, be slow, and don’t drive like a 50p piece. Remember that for your next trip to Tesco in your Vauxhall Zafira.

Has enough changed to make Project CARS 2 something to be excited about?