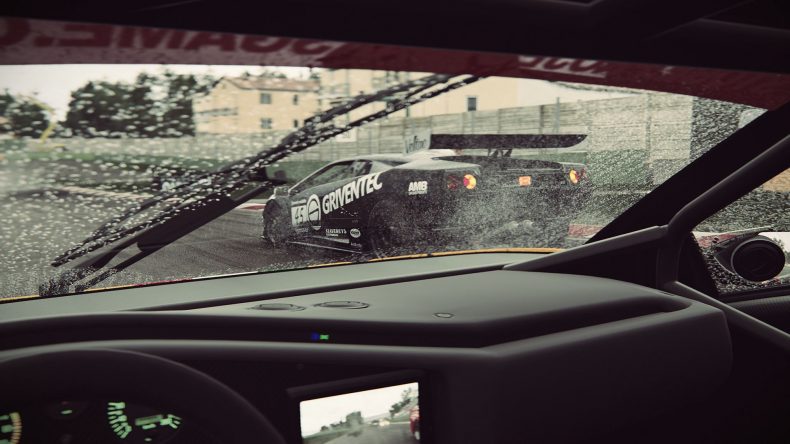 After driving nearly every vehicle imaginable in all conceivable situations, I’d adopted a certain arrogance not uncommon in people who spend their time playing games, as any public forum will attest too. So when I spent a Sunday at Brands Hatch for a Project CARS 2 preview event, enjoying the professional races and festivities while carefully avoiding the Ferrari parking area driven exclusively by the beige trousers, white polo shirt and red cap combo, myself and others would throw out our two cents “Dunkirk” speak-and-spell level of criticisms on the real life races happening outside.

And why not? Sure in our own racing abilities, we knew we could manage it in game (I couldn’t). My own cavalier strategy that had me facing each race like a round in Destruction Derby 2 did not translate well at all to Slightly Mad Studio’s upcoming release. I had to adapt.

While I’ve played many racing games, I’ve always bounced off of those who favoured more the term “racing sim”. They were either required an impenetrable level of knowledge on professional racing or were generally unpleasant to play – realism does not equate enjoyable after all. From my day of play with Project CARS 2, the first hurdle was cleared by the added feature of “The Engineer” who asked me in layman terms what problems I was having. Were the corner causing me issues? Did I not have the acceleration I needed? While it may appear to be a dumbing down of the ultra realistic simulator that people envision, it would turn out it was anything but. I spoke with game director Stephen Viljoen who, over the roar of the races outside he regaled me of the difficult battle they faced in their quest for authenticity, in particular gaining access to professional and factory drivers. Turns out the wonderful legend drivers having intimate knowledge of their vehicles was of an age long past, they are the talent now, they don’t have time nor the inclination to run the backstage show. They have people for that, and now so do you – if you choose to at least. The option of popping the bonnet and poking and prodding your ride is still an option for those inclined, but for people like me who just want to bugger off all of the busy work and get to the champagne popping races, the engineer is a hero.

First hurdle cleared, how about the infinitely more difficult second obstacle? Did the game’s authenticity detract from it being enjoyable? After nearly a day of play, I’m inclined to say no. Don’t get me wrong, from what I played it’s still as difficult as its predecessor: take a corner too fast and you will be destroyed. Trying to go that little bit faster than I knew I should to shave off those extra seconds usually ended up with me careening off track, but the moment I pulled it off was infectious.

Project CARS 2 does not have the same frustration usually found in the hardcore racing, due in part to the near instant restarts. Trying to figure out the nuances of a course turned into something more akin to a session of Trials than my own experiences with racing sims. I ended up more focused on conquering the track and besting everyone else’s time than anything else. Which if I am honest, is going to keep me interested longer than any NPC-race.

During my time with the game I glimpsed a plethora of options that were almost overwhelming, from every weather option imaginable to different assist options and even adjusting the “Violence” levels of AI racers, It’d be quicker to note what was missing if anything. None of it stopped me from jumping in though, nor did the fact that I was playing with a controller, which has vastly improved on its predecessor. It’s all looking green, and come September Project CARS 2 may very well make a motor head out of me.

Project CARS is out on September 22 for Xbox One, PS4, and PC.