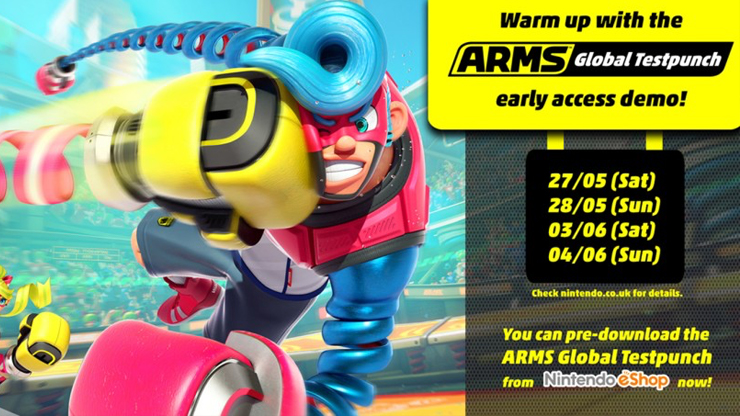 This early access demo will let you try out ARMS for free in certain time slots on two weekends. This lets you sample what the game has to offer before the launch next month. The two weekends are the ones beginning May 27 and June 3. You can download the ARMS Global Testpunch demo in the eShop for free ahead of the Testpunch. More information will be available closer to the Testpunch. Watch the Nintendo Direct below:

Spring Man – This passionate fighter’s bouncy hairstyle might look fake, but his passion for fighting is definitely real.
Ninjara – Using his nimble movements and ancient ninjutsu, Ninjara can disappear and warp somewhere else even in mid-air or when guarding.
Master Mummy – As the only character that can restore health while guarding, Master Mummy is a force to be reckoned with.
Min Min – With her ramen noodle arms, Min Min’s spin kick and throws are deliciously powerful.
Kid Cobra – A fan of selfie sticks and livestreaming, this hip fighter pounces on opponents with a charged-up dash.
Ribbon Girl – Possessing next-level jumping skills, Ribbon Girl overcomes the laws of physics with her unbeatable power.
Helix – Who is Helix? He’s an experiment gone wrong, that’s who. His springy body lets him move in unpredictable ways.
Mechanica – This mechanical genius dons a homemade power suit that can hover above the competition.
Byte & Barq – Two fighters in one! This robot fighter and his robot canine companion battle together to unleash devastating combo attacks.
Twintelle – As an A-list actress, Twintelle uses her celebrity status to render her opponents utterly star struck as she walks the red carpet to victory.

The following game modes will be available in ARMS:

Fight – In this main multiplayer mode, two fighters battle against each other one-on-one to claim victory. During the fight, bombs and other healing items drop in, adding some strategic options to the proceedings.

Team Fight – In this mode, two players are attached by strings and must team up to battle another team of two. Attacks can hit allies, so watch out for friendly punches!

V-Ball – Similar to volleyball, V-Ball is a sport that involves knocking an explosive ball into the opponent’s court.

Hoops – Grab opponents and shoot them into the net (or even dunk them for extra satisfaction) in this hardcore game of ARMS-style basketball.

Skillshot – Break as many targets as possible using the versatile powers of ARMS.

ARMS Test & Training – In ARMS Test, players can try out randomised ARMS combinations, while Training lets them practise a number of varied drills.

Multiplayer gaming: Playing with friends, either locally or online, is easy when using one of the various multiplayer modes in ARMS:

Grand Prix – Win 10 straight matches in Grand Prix and players will face a final opponent to be crowned the ARMS champion. (This mode is played locally with one or two players.)

Ranked Match – In this time-honoured coliseum, players compete online in 1-v-1 battles. By winning a match, a player’s rank goes up, while conversely, losing will make that rank go down. While waiting to play a Ranked Match online, players can participate in any other mode to pass the time (and tighten up their skills).

Local Wireless mode: When playing in Local Wireless mode, up to eight players with eight separate consoles in the same room can gather in an in-game lobby and battle up to three other players at a time, like in Party Match.

ARMS will release on June 16 on Nintendo Switch.