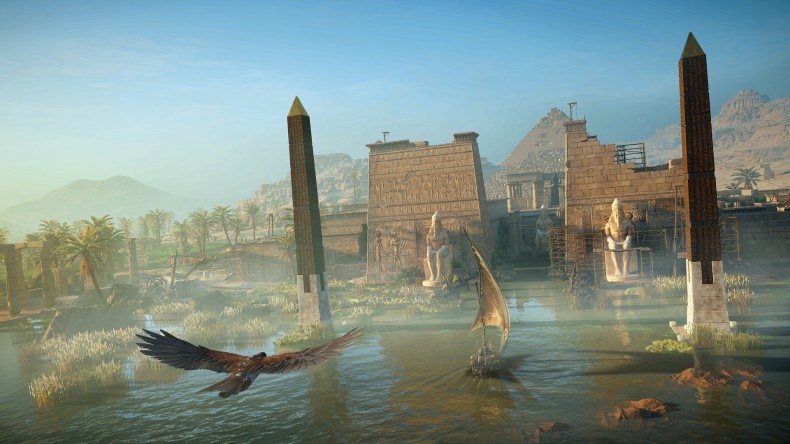 The world of ACO will be appropriately massive and includes the areas of Giza and Memphis, Siwa, the Nile Delta, and the Faiyoum region. Within these regions, players will be able to explore landmarks like the pyramids, the Sphinx, and the city of Alexandria.

This time around, players relive the experiences of the Egyptian Bayek, a member of the Egyptian Medjah order that kept peace at the time. Ubisoft has expanded its character customization options from previous entries, so the game now plays almost like a real-time action role-playing game. Players can choose to invest ability points in one of three areas across an expansive skill tree that includes specializations in fighting, sneaking, and crafting. Players earn ability points by leveling up their character through fighting, completing quests, and other actions in the game. Too add to the role-playing aspects, ACO now features a loot system consisting of thousands of weapons, armor, and accessories. As players explore the world and complete quests, they will come across countless items they can use to continually improve their stats. Combined with the ability tree, this means ACO now has a rather robust progression system with which previous titles only flirted.

ACO also adds an eagle companion for Bayek that allows players to scan the surrounding area at any time, locate key items, and mark enemy locations. Yes, the series obsessed with soaring eagles finally allows players to take control of one. As Bayek’s eagle, players can soar into the air as the eagle and appreciate the staggering scope of the virtual world.

In my short time with the game at E3, I rode into a small waterside town and investigated allegations that a common boy had stolen from a local priest. This involved finding the gold the boy was accused of stealing by diving into the water and sneaking onto a hostile, docked ship. I saved the boy’s life, but also angered the priest by defending the commoner. Because of my choice to save the boy, I had to then fight off the priest’s guards. After that, I was free to explore the surrounding tropical desert environment.

The demo I played did not have a lot of verticality, unfortunately. The free-running from past games is back, although it didn’t feel particularly improved. Yet without tall buildings, castles, and parapets, I felt limited in my movement options. The demonstrator promised me that mega cities like Alexandria would offer the kinds of cityscapes AC players are used to bounding over, but I worry that a large part of the world will feel, well, small by comparison. The game also has an arena mode I was able to experience, which pits players against waves of enemies in deadly arenas, similar to gladiator fighting pits. These largely optional fighting sequences test players’ combat skills within closed spaces full of spinning blades and spiked pillars. By completing these arenas, players can earn new weapons, outfits, loot, and experience.

In the demo I played, after I finished off a few waves of enemies, some heavily armored or wielding spears, I faced off against a boss character. Arena bosses are intimidating, towering figures with special moves and aggressive personalities. The vitriolic behemoth I fought had a massive scepter he used to lift me into the air and slam me into the dirt. He also had no qualms with charging me and tossing me through spiked wooden posts that were located around the arena.

Despite taking a year off, ACO does not reinvent the series completely. Like previous AC games, it merely tweaks the formula. The title feels like it largely overlapped with the development time of the last two entries in the series, and did not have the opportunity to revolutionize the franchise’s tried and true formula. Perhaps Ubisoft just wanted to take a year off to drum up for anticipation for this entry.

Assassin’s Creed Origins will launch on 27 October for the PC, PS4, and Xbox One.

A media scholar who also writes about video games for various outlets. He's interested in digital game production, media industries, residual media, and discourses around gender, race, and sexuality in media and production cultures.
MORE LIKE THIS
Assassin's Creed: Originse3 2017