Hello Neighbor is a weird, baffling concoction of stealth and survival in a moustached weirdo’s home 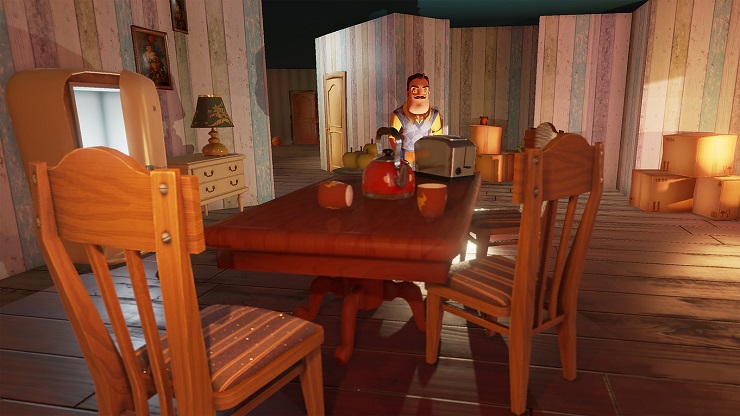 Two hours into Hello Neighbor and I was still locked out of the basement, still not entirely sure what was going on, and still soiling my pants at the very shudder of the game’s camera. It’s such an odd concept that I couldn’t help but keep playing, and although it can be damn frustrating, it’s a good bit of fun to keep your logic fluffed and your wits on full alert. The concept is straightforward; investigate your bizarre neighbour across the street without him noticing. But by investigating, you’re actually breaking into his house and trespassing on his property. A criminal offence? Yes. Neccessary to prove that somebody minding his own business across the street might be a psychopathic killer? Maybe.

You’ll always start from across the street, looking at his house and watching him appear from behind his house or through the front door, both in the daytime and the night-time. He moves a lot, and doesn’t seem to want to just sit in his armchair and binge on a Game of Thrones marathon (although he seems like the type who watches Bargain Hunt whilst having marmite on his toast), so you have to keep a track of his movements. This is where the stealth elements fit in; you can crouch to prevent making loads of noise, also allowing you to peek around corners to see if Mr Tache is on the horizon. There’s no map, yet, so you’ve got no idea where he’ll be at any given time; it’s important to make as little sound as possible. Where the game really comes into its own is in the survival. He may not be a great big xenomorph or a killer with a hockey mask and a machete, but hey, that moustache is terrifying! The camera shakes when he’s spotted you, and this alarming noise comes on alerting you to his discovery of you. You frantically look around, but maybe at first you don’t see him. You’ll leg it into the garden, bolt upstairs (like all idiotic teens in your favourite horror film), and try to get away, never really knowing where he is. When you do spot him, it’s normally too late, and he’s grabbed you, ready to….guide you outside to your house, probably helping you cross the road as well. He doesn’t try and stab or shoot you, and whilst on paper that doesn’t sound too scary, it’s still a thrill and you’ll probably jump every time. Think Ned Flanders with a dark secret and a scewiff snot mop.

Now, the one thing I haven’t yet mentioned is probably the greatest feature of Hello Neighbor. When you continue to take the same routes into the house, his AI improves and begins to learn your methods of entry. After a while, you may find he’ll change his route around the house to match your last few attempts, or he’ll lay a bear trap at the foot of the door you always seem to enter through. At one point, he set up a full surveillance system that would set off an alarm to alert him of your presence. Inside the house, he might begin to prop up chairs against door knobs so you’ll find it harder to get out of a room. It’s a rather smart mechanic, and one that becomes apparent the more you play. You’ll be able to outsmart him, though. You can disable the electrics to the house, shutting off the CCTV, or you can throw glue to slow him down if he’s on your tail. As soon as you get off his lawn and he’s in pursuit, he’ll stop. Even if you’re inches from his garden, he doesn’t seem to care, as long as you’re off his property he’s happy. There’s no stern talking to or threat of calling the coppers on you, which seems a bit odd, as you’ve both spent the last minute or so living out a famous Benny Hill sketch in the confines of his bizarro home.

It’s still in Early Access, and there’s plenty of room for improvement, but at it’s current build you’ll still have a good time escaping from Mr Moustache’s sweaty palms, large forehead, and argyle sweater. Dynamic Pixels has built something very different, and even though it falls into two distinct genres, it manages to mix things up in ways you’ve probably never seen before.

Video games are cool. Don't let anybody tell you any different.
MORE LIKE THIS
hello neighbor