UNDER NIGHT IN-BIRTH Exe:Late[st] announced for Q4 2017 release in Europe! 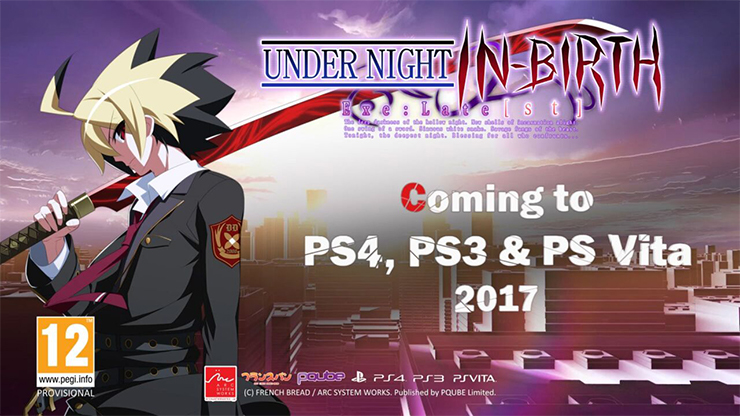 PQube games is bringing UNDER NIGHT IN-BIRTH Exe:Late[st] to Europe.

UNDER NIGHT IN-BIRTH Exe:Late[st] just released in Japanese and the Arc System Works and French Bread fighter will be localized in Europe thanks to PQube Games. This will release in Q4 2017. There will be a digital release on PS3 and Vita while PS4 gets a physical and digital release. Watch the trailer below:

New characters – Phonon, Mika, Enkidu and Wagner join the battle!
New Stages – 4 new stages to do battle on, Cafeteria, Children’s Playground, Momiji Alley and the Cathedral of the Far East.
Re-balanced gameplay – Old favourites have new abilities and new gameplay elements have been added, including the ‘Veil Off’ system that opens up new combo opportunities.
Combo Challenge Mode – Learn new combos and take on some of the hardest challenges in the game.
Tutorial Mode – An expansive tutorial mode has been added to the game that teaches all the skills necessary to level up your game.
Chronicle Mode – Discover the narrative of UNDER NIGHT IN-BIRTH Exe:Late[st] in a dedicated story mode experience.