CoD: WWII Closed Beta Impressions: The good, the bad, and the damn snipers 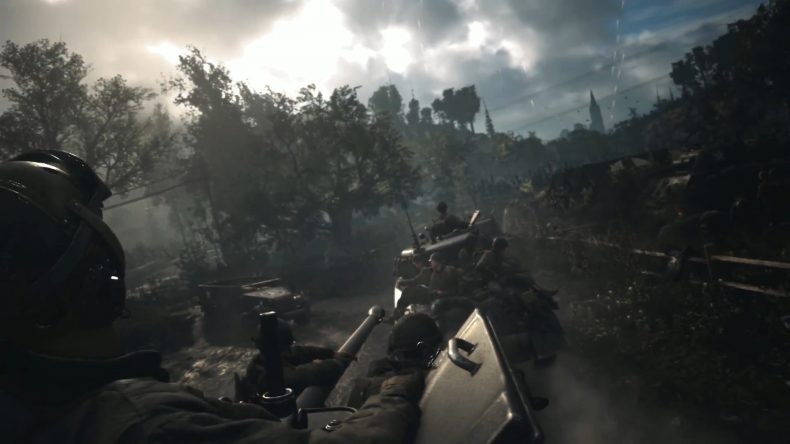 The long-awaited and often asked for return to “boots on the ground” Call of Duty beta was over the Bank Holiday weekend (at least here in the UK) and I spent a little bit of time with it.

I will admit to being excited about the change of pace with Call of Duty, I have never really gelled with the faster and more vertical movement in the last few iterations of the annual franchise, this being despite the fact that I fancy myself as a bit of a menace in Titanfall which is all about that constant, fluid movement. I liked Advanced Warfare well enough online, and I put rather too much time into Black Ops III multiplayer, but last years Infinite Warfare left me cold.

When compared with the sublime multiplayer experience that is Titanfall, I felt that the gameplay was sluggish and the maps cluttered and unfriendly to play on. Furthermore, the increasingly smaller maps, and my ageing reflexes has meant that the game online is getting away from me a little bit now. I just don’t have the preternatural timing that most of the community has anymore to slog away at it. I’ve gone from a player who had a 2.0 k/d way back when Black Ops was first released, to someone who hovers around 1.4 and yells a lot at the screen. Sadly, I don’t think that this version will be enough to bring me back to prestiging over and over again either and that makes me a little sad. That isn’t because the Beta wasn’t good, it was. I just think that I have outgrown the gameplay, and there are (in my opinion) far more exciting and interesting first person multiplayer experiences available now.

For me the issues with the Beta are the same ones that I have every year, and that is the size of the maps. I am not the sort of player that runs straight down the middle of a map, preferring to run around the outskirts, as silenced as I can be and hopefully get the drop on the enemy as they all run to the middle. The decreasing map sizes make this increasingly harder to do, and the maps presented in the Beta were on the small side also, although Ardennes was a reasonable size. Furthermore, I played two games of Team Deathmatch on the Ponte Du Hoc map and got spawn killed three times in a row with the game insisting on respawning me where I had died a moment previously. Also… QUICK SCOPING BELLENDS. But enough about my grumbles, lets talk about what was good in the Beta.

Visually the game looks great. The detailing on the maps, particularly the Ponte Du Hoc trenches is fantastic, and I got a real World at War vibe when I first loaded into a game. The sound design on the weapons is also very good with each gun I tried feeling weighty and good to shoot. I also welcomed the fact that you couldn’t double jump and jet pack any where which meant that exploring the maps was a much more straightforward process! I had a go at all the usual modes, Team Deathmatch, Domination, etc. to familiarise myself with my surroundings and then launched into the new mode: War. This seems to be taking cues from Battlefield‘s Operations/Rush modes where there is a team of attackers and defenders with a loose story objective to the map. There are four stages that the attackers need to push through while the defenders try to stop them. The advantage appears to be very much on the side of the defenders, particularly in the second section of the mode where the attackers need to repair a bridge to progress.

It was here that I started shaking my fist at the quick scoping snipers. I am not a sniper at all, but even I can pull off the ridiculous quick scoping thanks to an over generous aim assist and the extra damage sniper rounds do, particularly if you land a headshot. Attackers are granted smoke grenades so that they can hide their actions, but even as a sniper you can fire wildly in the general direction and more often than not will hit a target. It seemed a little game breaking to me, but admittedly I didn’t spend that much time in the War mode.

War is reasonably fun, and is certainly a different direction for Call of Duty, but I am not too sure how long it will be played for with the Team Deathmatch playlist even in the Beta boasting the quickest game mode to get into. Other changes seem to be centred around perks and classes. Rather than creating a class now, you have the option to choose from a number of divisions like Airborne or Infantry. These broad classes give you specific perks, for example in Airborne you can sprint for longer distances, while choosing Mountain will hide you to player-controlled kill streaks. Furthermore, you can supplement the core skills of your division with Basic Training skills like Phantom that will allow you to hide from enemy recon aircraft, silence your steps and grant you zero fall damage. It takes a bit of getting used to, but is something I am interested to fiddle about with to find the best set up for me to be able to play in the way that I like to.

I feel a little underwhelmed with what I saw in my time this weekend, but I am looking forward to next weekend when the beta will open up for another weekend of testing. I will be trying out a few more of the Divisions that I didn’t get around to trying and some of the weapons too. I also intend to give the War mode another go so that I can get a better grip on how to play it. I can’t escape the feeling though, that this may well be the first year that I don’t get and play a Call of Duty game on release, but in fairness Call of Duty – it’s me, not you.

Likes to shoot stuff and wear pretty shoes. Is a BEAST at Titanfall.
MORE LIKE THIS
Betacall of duty world war ii