previous
Podcast: Geek of Thrones Season Two #4 – The Spoils of War (S7E04)
random
next
The Escapists 2 seems to be more of the same and that's OK
0 comments

The five stages of falling in love with Superhot 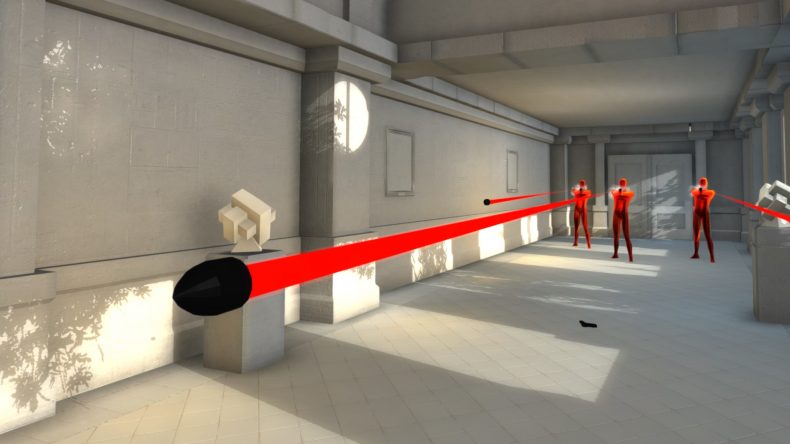 If you’re familiar with Superhot you’ll know how cool it looks, but if you’ve played it, you’ll know it’s the most innovative shooter in years *cough* and quite frankly, it’s a damn fine shooter. Not only does it make you feel like John freaking Wick, but it’s a smart puzzler that has you thinking about where to place your next bullet, who to shoot in the face next, and how to manipulate the level itself. If you’ve never dabbled with Superhot, have a word with yourself. Seriously, go into the kitchen, find a wooden spoon, and smack yourself over the head with it. Done? Good, now go buy it off the PSN store and play it now.

The thing with Superhot is you’re constantly being surprised by it, and as you progress through the stages, more things become apparent and the wow factor increases with every second of playing. There were five stages of Superhot where I fell a little more in love with it, and I’d like to give you a rundown of those said moments. There maybe spoilers ahead, so read if you’ve finished, or at least not bothered by them. It’s a slow affair, with every kill having to be planned and executed without any mistakes. Hell, this is part of the fun, but wouldn’t it be cool if you could rewatch that whole level when you slice, shoot, jump, and dodge your way through a level? Well you only bloody can! After each stage, you can rewatch the whole thing in real time, so seeing every smart move you’ve just made unfold at a normal speed is pretty damn amazing to watch. There’s one stage in a lift where you’re surrounded by three guys – two have guns. It feels like a couple of minutes for you tofinish, making sure you take the right dudes out first, but watching it back last barely five seconds. It looks ace, and makes you feel like a hero.

If anything in Superhot makes you grin from ear to ear, it’s throwing a gun with no rounds left in it straight at an enemy, only for them to let go of their own weapon in the panic. As it flies through the air, you can grab it, turn it round, place your finger on its trigger and blow the guy who let go of it to kingdom come. The best kinds of weapons in Superhot are the shotguns, so when this happens you’ll see them shatter into a million pieces quicker than you can say “WHY AM I ONLY PLAYING THIS NOW!” There’s a lot of killng in Superhot, but the moments you’re not doing said killing, you’re watching a game play havoc with convention. Bare in mind that this is also a VR game, so when the story suggests your a guy playing VR within the game as well, it begins to get very meta. Hell, the final moments of the game sees you shoot yourself in the head, approaching yourself sat at a monitor with a VR headset on, playing Superhot. There are other cool moments when you have your little chats with the mystery person, or get trapped within the code of the game; generally, it’s a smart little ditty that surprises you constantly, making you “ooh” and “ahh” as if you’re at a fireworks display.

Probably my favourite reveal in Superhot is the moment you realise the game has Samurai swords. Yeah, swords. As if shotguns, pistols, and machine guns weren’t awesome enough, you get to slice fools up with a sword. Not only can you move within the levels wielding one, but you can also throw them directly at an enemy like a dart. Phil ‘The Power’ Taylor would be proud. There are stages where a lot of dudes want a piece of you, and it can become pretty darn intense. Later down the line, the game introduces you to a brand new mechanic where you can transfer your data into another, fundamentally allowing you to transfer yourself into one of the enemies you see around you. For example, if there are two guys showering you with bullets, and you’re gunless, that fella behind them can become your new body. With the click of a button, you move your consciousness into him, allowing you to take out those two guys with guns from behind, and they’ll never see it coming. It’s a great feature, and one more reason you’ll fall in love with this game.

Superhot is one of the finest puzzlers of all time, and it’s also one of the coolest FPS games I’ve ever played. It fuses the best parts of Portal, John Wick, The Matrix, and Mirror’s Edge together to make an original and innovative (what? It is!) game unlike anything else out there.

Video games are cool. Don't let anybody tell you any different.
MORE LIKE THIS
ps vrPS4SUPERHOT

One Piece World Seeker adds the Germa 66 to its roster

Summer Lesson: Allison Snow and Chisato Shinjo will get an English relase in Asia this year for PS VR

The Rise Of Online Casino Popularity in Portugal