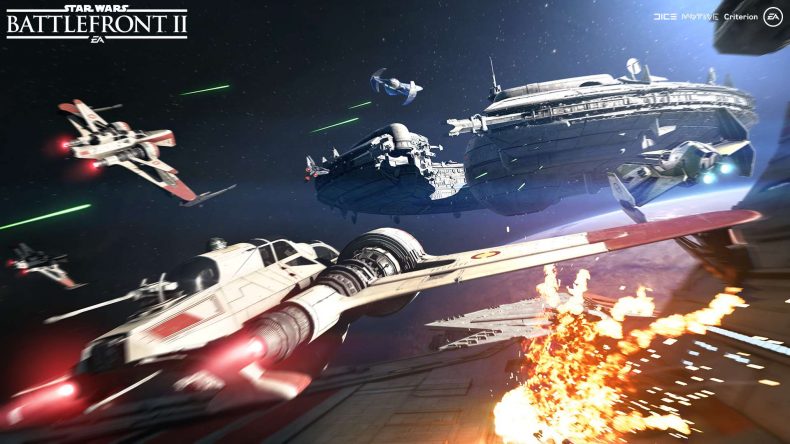 At Gamescom I got to spend an hour or so playing Star Wars Battlefront 2’s new space battles in a large LAN-party. A match lasted around 15 minutes and consisted of various changing objectives but never really went any further than the “defend this ship” or “attack this generator” and is a far cry from what I expected.

When I think of a Battlefront space battle I recall the PS2 classic that had combat on multiple changing levels, where teams would attack and defend key points of their ship via on board turrets, starfighters, and boarding one another. A match’s objective would change during combat not because a predetermined requirement had been filled, but because of the enemy team switching tactics to try and flat foot you. It was so enjoyable that I know of a group of people who still meet up every other month to play private matches on PC. So calling these space battles felt a little disingenuous to me – they have much more in common with the previous Battlefront’s aerial fights, which isn’t necessarily a bad thing. There seems to be more depth here than in EA’s previous Star Wars game. The much lauded authenticity is ever present and you are now given full control of your ship. Being able to roll in any which way you desire allows for some ridiculous maneuvers and makes the dogfights that much more intense, especially if the other pilot has even a modicum of skill. There is an interesting rock-paper-scissors dynamic between the three main ship types as well.

The bombers (which are relatively slow and pack the most punch) are incredibly difficult for their faster, more agile counterparts to take down. While an A-Wing interceptor can easily get behind a TIE-Bomber, it takes far too many shots to be considered effective and leaves them vulnerable to the TIE-Fighters or (X-Wings) who sit in between the two classes as a more balanced middleweight ship. There are also “Star Cards” available that can be equipped before spawning to help tweak the ships to your playstyle, more damage, a faster cooldown on your abilities etc. I mostly played as an A-Wing pilot, and after a few rounds it became clear that my role in the battle was less about hunting down the big targets and that I should be devoting my efforts to protecting my squads slower ships from TIE-Fighters or interceptors like myself instead. Putting the trust in my teammates to get the objective done while I did my best to cover their back was quite terrifying. I had no real knowledge on how close we were to winning. It was incredibly easy to lose my squad members amidst the combat and I would have preferred a clearer indication as to their whereabouts.

A big issue with the last Battlefront’s Hero Ships was that they functioned less as game changing super fighter and were more of a giant target for the enemy team to focus on. Piloting one of them was less about how much damage you could deal, and became an exercise as to how many seconds you could survive with everyone trying to kill you. I can’t really say this issue has been remedied but they are a little more difficult to kill, so it’s a step in the right direction in the very least.

Star Wars Battlefront 2 is scheduled for release on PS4, Xbox One and PC on on November 17th with a beta starting on October 4th when pre-ordered.