Assassin’s Creed Origins makes you feel like a badass 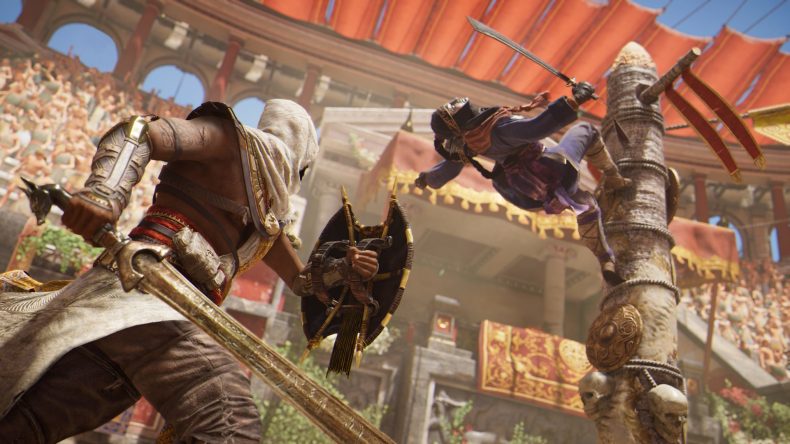 Ancient Egypt was always the one setting that people wanted to see in the Assassin’s Creed universe. Climbing up the pyramids, exploring tombs, and sailing down the Nile sounded like perfect things to do in the Assassin’s frame work, and when I found out that Origins would go to Egypt after taking a year off in the annual releases it seemed like the perfect storm for the best Assassin’s Creed game yet.

But the weird thing is that despite all the hype, so far it seems that Egypt isn’t the best place for an Assassin’s Creed game. I’m sure climbing the pyramids, and hitting up the other landmarks will be great, but unlike in time periods where the brotherhood invades an established city, there isn’t really that much to climb on in Egypt. For a game that has always been about verticality, running along rooftops and jumping off them in cool ways, it’s surprising to see that it’s near impossible to do a lot of that in Origins.

It is perhaps worth mentioning that for my demo we were only allowed in a fairly small section of the map, which unfortunately had no major landmarks in it. There was also very little in the way of towns or villages, so a lot of the buildings were small one story affairs that really didn’t take much effort to climb up. There is a good chance that other areas improve on this, but for those of you expecting to be able to stay on the rooftops for the entire game like in Syndicate you will be disappointed. The lack of verticality certainly changes this from the norm, and it is a little disappointing at first, but when you start to see how the ground game has been improved, especially in combat situations, you notice the lack of climbing a lot less.

This first happened to me when I was tackling one of the Far Cry-style outposts, set in kind of a canyon with nothing in the way of buildings. With little to climb and lethal drops from the top, the stealthy hidden blade approach seemed impossible. However, some conveniently places bushes around the hideout made this doable. Instead of sneaking across rooftops I was sneaking bush to bush, silently taking out foes with blades and bows, and it was very satisfying.

It’s this stealthy play where things felt like they worked the best. Thanks to some of the abilities I had earned, whenever I took someone down with a bow from stealth I gained a few extra moments of slow motion. I used this to my advantage when three guards were sat out in front of a tent that I had perched on top of. The middle guy was swiftly taken out with a bow shot, before I leaped down and assassinated the second guy in true Assassin’s Creed style, and then with the slow motion still going I whipped out the bow again and delivered a swift arrow to the third guy’s face before he even knew what was going on. It’s a little different to the awesome moments of the previous titles, but it still makes you feel like a badass. Assassin’s Creed will always be a stealth focused game to me, but thankfully the combat systems have also been reworked. No longer can you stand in the middle of eight enemies and come out on top by fighting them one by one as they attack and you counter. Instead you will want to look for one on one battles with no one else around, as enemies are not afraid to attack when you are trying to chop off their bestie’s head.

You can still feel the old mechanics, as blocking and countering is still a big part of combat, but it is much improved, and requires some strategic thinking instead of essentially boiling down to a quick time event. Using different types of weapons also changes the feel a lot, and with a Destiny-like loot system, where you will gradually find better weapons with different stats and rarity, you will be swapping weapons a lot.

Another potential area of concern is the leveling system and how content is blocked off depending on your level. My demo started at around level 12, but the first main story mission, which involved tracking down info on a mysterious man called the Scarab who was terrorizing the area and presumably becomes an assassination target, required me to be level 15. Grinding out three levels to be able to do this was slow going, thanks to limited XP rewards for in-world actions and high rewards for completing side quests. Unfortunately these side quests also had recommended levels, and finding things to do that were my level pretty much became a game of hovering over every icon on the map (which is a lot cleaner this time around) to find one I could do. Hopefully this was just an issue with the demo and was somewhat intentional, because if you are going to have to grind out levels by killing the tax man three times then it will be a very slow and laborious experience.

There are certainly some issues with the area that I spent four hours in, but you have to think that a lot of them could probably be very different in other areas. In the bigger Egyptian cities, and around the major landmarks the lack of things to climb will go away, and with a larger open world to explore there should be more content that is at the correct level. While I can’t say that for sure, it would be foolish if that wasn’t the case, and if Ubisoft does get it right that this could be something special.

Origins certainly feels like an Assassins Creed game, but it also felt quite like Far Cry as well. If Ubisoft was to ever mix the two franchises then this is probably what it would be, as the rooftop running and awesome hidden blade assassinations seem to have morphed into long stealthy bow shots and lots of hiding in bushes. That isn’t necessarily a bad thing, it’s just quite different to old school Creed. If the world of Egypt can live up to its potential then this should be up there with the great Assassin’s Creed titles, but right now there are a few uneasy concerns that could lead to its downfall. Also, fuck Hippos.

eSports! I joined God is a Geek all the way back in September 2013 and since then have spent most of my time on Dota 2, and occasionally posting the odd review, news article or totally wrong predictions for The International. When I am not playing Dota I can probably be seen watching some kind of strange eSport or begging for more Twitter followers (@MikeStubbsy if you are interested). Aside from GiaG I am a computing student, football coach and major Apple fanboy.
MORE LIKE THIS
Assassin's CreedAssassin's Creed: OriginsUbisoft