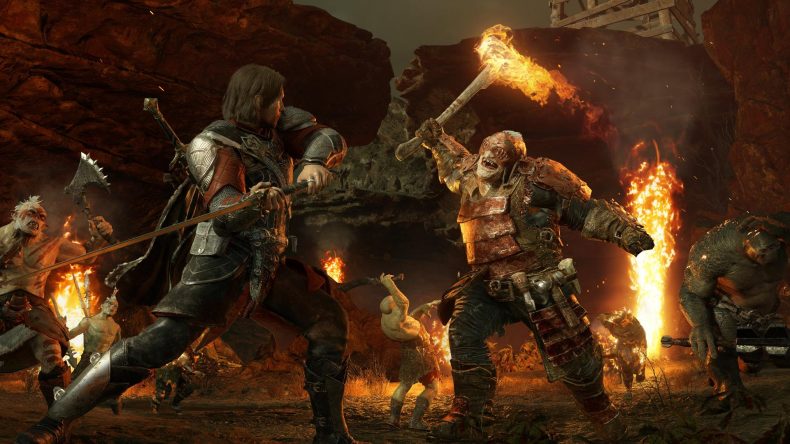 Monolith’s first foray into Mordor was a tough game. Thanks to the Nemesis System, enemies who killed you became stronger each time, and it was entirely possible to paint yourself into a corner where the only way out was through a nigh-invincible Warchief. The sequel is somewhat fairer and more balanced, but it’s still easy to bite off more than you can chew and get in over your head. Here’s a handy collection of tips to help you survive as the Gravewalker – or at the very least, die constructively.

These cowardly little sods will usually run when they see you coming, but they’re worth chasing down anyway. Easy to spot thanks to the green symbol above their heads, they have valuable intel on Captains. Not only will they squeak like canaries when you squeeze them, they’ll divulge enemy identities, weaknesses, strengths and personality ticks. As you approach a camp, it’s worth scouting out the Worms first before they get the chance to panic and scarper.

While there’s plenty to do in Shadow of War to advance the story or bolster your army for conquest, it’s worth going off the path as often as you can. It’s a shame modern games want to highlight everything on the map, but you don’t necessarily have to locate all the collectibles from atop the Haedirs; you can always go exploring yourself. Either way, the regions of Shadow of War are vast and crammed with goodies, from poem fragments that unlock Elven doors, to scattered shards of Shelob’s fractured memory or lost Gondorian artefacts. You can get through the game fine without them, of course, but where’s the fun in that? Don’t be afraid to run away

This is important: if you die while fighting at the hands of any orc, they’ll be immediately promoted to Captain. If it’s a Captain that kills you, they’ll level up, becoming stronger and sometimes gaining a strength and losing a weakness. Unlike in Shadow of Mordor, it’s pretty hard to die in SoW unless you’re careless. When you’re struggling, turn tail and leg it. Yes, sometimes the Captain you’re fighting will remember your cowardice and taunt you for it, but that won’t matter when you return, stronger, and feed the green-skinned gobshite to a Graug, will it?

A pretty simple one, this, but I didn’t realise you could combine the gems you find, Diablo style, to increase their efficacy. To be honest, I didn’t realise you could socket them in gear for a few hours either; I just thought they were currency. The menu for upgrading them is tucked away on the Inventory page, where you also equip them. You’ll need 3 of any tier to upgrade to the next, but it’s worth it. Unlike the Mirian that drops from white-marked enemies, gems seem to drop more or less randomly when you’re fighting larger groups of Orcs. Hoover them up and combine them for a much-needed stat boost.

Likewise, you can upgrade your gear as long as it’s above common rarity. You don’t combine gear pieces or use craft materials though; instead, you’ll find challenges attached to each item in the Inventory. They might be fairly simple (headshot 3 enemies), or tricky (headshot an enemy who’s on fire), but when unlocked they increase the item’s base stats, can sometimes add new buffs, and usually upgrade the appearance to something a little grander. They’re also great fun to complete while you zip around murdering orcs. Speaking of which, don’t kill everyone. Well, you can if you want to, but you’d be missing out. About half way through the campaign you’ll unlock Talion’s ability to Dominate an Orc or Uruk instead of draining and killing it. Domination turns them to your side permanently, but they’ll still go about their business until triggered. Their woad turns blue, though, and their eyes glow a bit, which gives them away to others of their kind. It’s a good idea to dominate an entire camp or squad of enemies before taking on a tough fight.

Don’t be a lone wolf

One of the best things about being able to dominate your enemies is that, if you take a Captain, you can make him your personal bodyguard. Opening up the Army menu allows you to train your Captains in various disciplines like poison use, for example. But if you press Y (or Triangle) you can give them tasks. You might send them off to kill an enemy Captain, spy on a Warchief for you, or raid enemy supplies – or you can turn them into your personal flesh shield and have them turn up when you get into a particularly tough scrape. If you’re planning on attacking a Warchief or a high level captain, it’s worth dominating a few nearby orcs and calling your bodyguard. Beware though, if you take them into battle against a former blood brother, it might not go your way.

Talion is a handy chap with a sword, dagger or bow. In fact, he’s so handy with all three that his preference is your preference. If you want to sneak about, you can; if you want to charge at every non-human monstrosity you come across, that works, too. But the real nitty-gritty of what makes Talion so damn lethal is in the skill tree. There’s something in there for everyone, to suit any play style, and some of his tricks are essential. From instant-executions and double-instant-executions, to barrel poisoning, Graug-riding, teleportation kills (sexily called “shadow-stepping”), and handy stuns and throwing knives, the skills on offer are not only varied but upgradeable, each one possessing two or three modifiers to further hone your arsenal. Hitting LB or L1 will trigger Talion’s wraith-sight and allow you and him to see what his symbiotic partner/master Celebrimbor sees. Likewise, holding the left trigger to ready his bow will also paint the world in black and white and highlight points of interest. Among them you’ll see explosive barrels, hunks of dead meat that will attract predators, barrels of grog you can poison, or Morgai Fly nests to shoot down. Any one of these alone is enough to cause a bit of confusion for your enemies, but hitting a few at once can cause outright chaos, making it much easier for Talion to slip about the shadows unseen.

Following on from that, it’s a good idea to use the environment to give yourself the upper hand (or at least a fair shot) against enemy Captains. Interrogating Worms can reveal a Captain’s weaknesses, fears and rage triggers, all of which you can exploit if you’re clever. Facing a Captain terrified of Carragors? Knock down some meat to bring a few snapping and snarling into the fray. Is he weak against executions? Or better yet, can he be instantly killed? I found myself facing a Captain who had become nigh unkillable thanks to his tendency to adapt to my attacks. When another Captain joined the fight who was Enraged by cowards, I simply triggered the unkillable guy’s phobia of Morgai Flies and the other one murdered him for me, right there and then. It was a wonderful emergent moment, but also a valuable lesson.

Whenever a Captain kills you, he’ll appear in everyone else’s gameworld as a Vendetta mission. If you track them down and claim vengeance for the death of another player, the rewards are always worth the effort. Beware though, because these enemies are usually at least Epic – elite brutes who travel with a veritable army of high-level orcs, uruks and trolls. These fights are always tough, but the rewards and bragging rights more than compensate for the difficulty.

Senior Content Editor Mick has been playing games for over 30 years and writing about them for around 12. After drifting from site to site for a while, settling briefly at the now-defunct Made2Game and freelancing for the gone-but-not-forgotten NintendoGamer Magazine, he came at last to rest at Godisageek. Mick has been a reviewer, staff writer and content editor here for some time, while also moonlighting a little for Red Bull Games. He has 4 kids, has written 2 novels, and sometimes even manages to pay a bill or two. You'll usually find him defending the galaxy in Destiny 2, battling evil in Diablo 3, or lurking in the background on Twitter. Find him there @Jedi_Beats_Tank, or on XBL (JediWaster247), PSN (Jedi_Waster) or Nintendo (JediWaster).
MORE LIKE THIS
middle earth: shadow of war