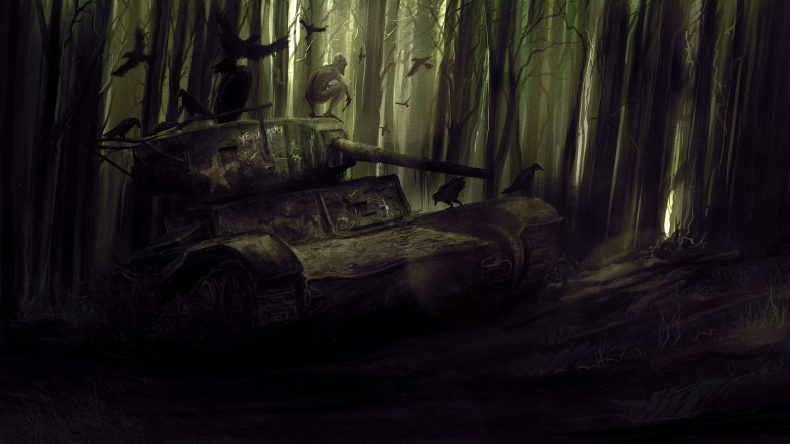 2017 has been good to us horror fans, hasn’t it? Resident Evil 7 brought the series back to its survival horror roots, with the Baker family scaring the shit out of us on a regular basis; Outlast 2’s brand of torturous, panic-inducing terror had folk wetting their pants; The Evil Within 2 surprised us all by bringing some of the most atmospheric scares of the year; and those are just the biggest names. But what about those of you whose first horror steps have only been taken this year? You’ve missed a few gems from previous years, some of which are now available to download via many of today’s formats, and some you might never have heard of anyway, regardless of how long you’ve been playing these games.

That’s precisely why we’re here. Gary and Mikhail have been delving into some of the horror titles you may have missed…

Released this year, after a few years in Early Access on Steam, Darkwood is a top-down game of survival. You’ll craft items and search out people to help you escape the titular woods, but the real kicker is when night falls. God help you if you’re outdoors, or even indoors, quite frankly. When you’re huddled in the darkest corner of the room, alone and unable to see even a foot in front of you…then you hear a door opening, something shuffling around in the other room. Very few games have that kind of ‘nope’ factor, but Darkwood’s use of sound is perhaps among the very best the genre has to offer. Stick a decent set of headphones on and you can hear every twig snapping, every footstep, every growl in the darkness. Darkwood’s atmosphere is as good as anything I’ve ever experienced in the genre, even getting close to the quality of Silent Hill 2.

Speaking of atmosphere, Home is a game that has it in spades. Games these days often talk about choices and consequences, but Home’s ending really can change depending on your choices throughout the game. It’s not a long one, clocking in at around an hour or so, but it is designed to be replayed. It’s also super cheap even when it’s not in a sale, so it’s hardly breaking the bank should you take a chance on picking it up. The whole idea is that you’re trying to get home, picking up the pieces of your memory as you go, but something is certainly amiss. Much like Darkwood, the atmosphere is delivered via some cracking use of sound, plus the super low resolution sprites that somehow ooze character. The whole thing feels grimy, but in the best way for a horror story.

Not exactly a traditional horror game, but this Early Access title knows how to make you feel on edge. The whole idea is to survive in a zombie apocalypse, simply by scavenging and being smart. You can’t just break into any house, because they might still have alarms and if they go off, it’ll attract any undead in the vicinity. Fighting them off isn’t easy either, especially as weaponry is extremely rare and guess what? If you’re bitten, there’s a good chance you’ll find yourself infected! Or if you’re wounded, which can happen even if you smash a window, you’ll need to bandage yourself up. It leans heavily on the survival aspect, but when something inevitably goes wrong on a supply run, rest assured that you will panic and find yourself in a bad situation. Its late-Nineties aesthetic, complete with isometric visuals that recall games like SWAT 2 and even Sim City, ensure that it doesn’t require much in the way of PC power to run it.

Few games matter to me enough to try and hunt down every single version on every platform. Corpse Party is something I discovered on the Vita as a PSP classic. It is a top down horror adventure game set in a high school that blends visual novel like storytelling with a chilling atmosphere during gameplay. If you’re looking to try something different, Corpse Party with its multiple bad endings and great use of audio is an easy recommendation. The visuals may not feel scary to you but once you get immersed and the story picks up, expect to be blown away. While I’m mentioning every platform above, the best place to play this would be on either 3DS or iOS if you have access to those platforms. The 3DS is the most modern version for sure. Get a nice set of headphones and dive in when you’re ready.

NIS in Japan is mostly known as the studio that makes the Disgaea games. Over the last few years though, they decided to get some smaller teams internally to work on new projects. Yomawari: Night Alone is one of these and it released last year for both PlayStation Vita and PC. You play as a young girl who is walking her dog and eventually are in an accident. This is where your nightmare begins as you try and look for your dog through isometric gameplay. Mechanically it is very simple because you just have your torch while walking and exploring and a few items and objects you can use. There are grotesque nightmare inducing horrors all over the place and you will die a lot. This is another example of audio being used well and as you can tell, it is a common theme in most great horror games. The newest entry in this franchise released in October this year in the form of Yomawari: Midnight Shadows but I’d recommend playing Night Alone first for sure. I hope they continue making games like this because it shows you can be creative on a budget and scare the crap out of anyone with some varied monster design and environments.

So, there you have it. These are just five of the smaller, lesser known titles that are well worth your time, especially with Halloween upon us. Perhaps you have your own suggestions to accompany our choices? Let us know!