previous
Is it Conceivable that Players Could Soon be Running around in Games?
random
next
Ten tips to have you driving like a pro in GT Sport
0 comments 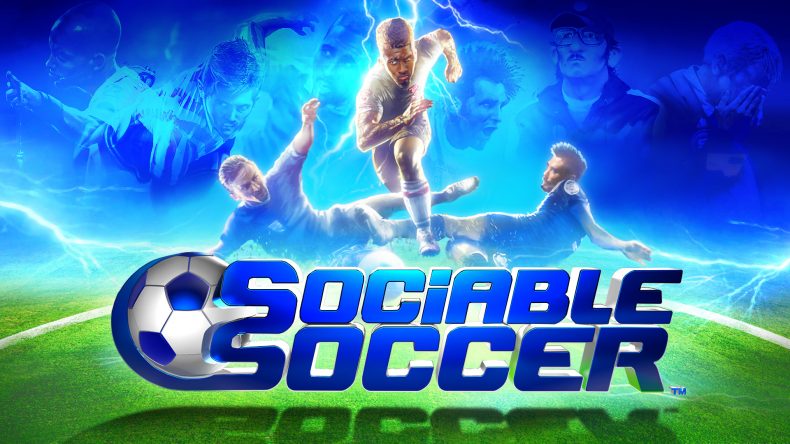 I used to love Sensible Soccer, back in the day. I have fond memories of playing it with family, especially that one time we attempted to teach my mum how to play it, with hilarious results. Still makes me smile, to this day. When Sensible World of Soccer was released on Xbox 360 I didn’t hesitate in picking it up, back when things were still bought with Microsoft Points, and playing online with a friend was great fun. It’s a game that simply cannot age badly.

When it was announced that Jon Hare, one of the creators of Sensible Soccer, was developing a sort of ‘spiritual successor’ to his classic football game, I was very excited. I’m not really a huge football fan these days, so games like FIFA and PES don’t interest me too much; Sociable Soccer with its focus on high-speed arcade fun, on the other hand, is exactly what I want from a sports game.

Despite an unsuccessful Kickstarter campaign, eventually the team at Tower Studios managed to keep development going and now it is here, via Steam Early Access. It’s a little rough around the edges, but there is still a substantial amount of content from the very beginning. Right now, there are over 1000 teams to choose from, spanning 67 leagues all around the world, and a myriad of game options such as standard exhibition games, couch co-op and Boss mode. Boss mode is essentially the game’s campaign, with you taking charge of different teams across the globe. You may only play a handful of games in a cup competition, but winning will grant you coins that unlock more difficult scenarios as you progress. It makes Sociable Soccer even more of an arcade prospect than Sensible Soccer was, lending it a mobile feel. If that’s the sort of thing that might put you off however, don’t let it stop you from playing this wonderfully nostalgic (and fun!) football game. I particularly like the silly caricatures of the chairman, cigar in his mouth and looking a bit like a villain from a Nineties action movie, and the grubby-looking, down on his luck manager, who really does look like he desperately needs a shower and a cup of coffee. Rest assured, Sociable Soccer is not a serious game.

When your first match loads up, it really does look like a Sensible Software game. It’s colourful and vibrant; players are squat and cartoon-like; and you can (and should) play it using a top-down perspective. The controls are fluid and easy to grasp, especially when played with a gamepad (I used my Xbox One controller), using only a few buttons for passing, shooting and chipping the ball around the pitch. The longer you hold the button, the more power will be behind the kick. That simple. If you think FIFA’s pace is fast, you’ll probably be unprepared for the caffeine-fuelled-Speedy-Gonzales speed of Sociable Soccer’s arcade action. It’s the definition of end-to-end football; passes zip around the pitch, slightly directed toward the nearest player, and shots will rocket towards the goal, complete with the return of Sensible Soccer’s ability to curl every shot or pass like that famous Roberto Carlos free kick from 1997.

It’s not all rose-tinted however, as although the game is tremendously fun to play, the AI is rather dumb at this stage. You are almost guaranteed to score with any bending shot, because the goalkeepers simply cannot react quickly enough. The outfield AI is better, but still offers no challenge whatsoever right now. At this point, I have played many, many games and have only conceded one goal (which was my own fault, thanks to some awful defending) but, more importantly, have won every single game by no less than five goals. I even won one game 13-0. Hell, I played Man United vs Liverpool, and the Merseyside team went home miserable after a 5-0 tanning. It just didn’t present a challenge. Well, I say Man United, it’s actually Manchester Reds because why would a game like Sociable Soccer have official licensing? It simply doesn’t need it.

The good thing about the issues present is that Tower Studios is already on top of some of the basic problems and many were already fixed within days of the game’s Early Access release. The major issues like the AI and goalkeeping have been acknowledged and are first on the list of planned fixes, meaning that the game will be more of a challenge soon enough. I mean, everyone likes to win, but not that easily.

With gameplay foundations that are already incredibly solid, and a team working around the clock (almost literally, given that the lead coder was updating the Steam page with the details of the first patch during the night, while the community manager was in bed like a normal person) to fix known issues as soon as possible, not to mention the number of features planned over the next few months until its launch in early 2018; I think it’s safe to say that Sociable Soccer is shaping up nicely. One to keep an eye on, at the very least.