previous
Animal Crossing: Pocket Camp is now available worldwide
random
next
A beginner's guide to The Sims 4 on consoles
0 comments 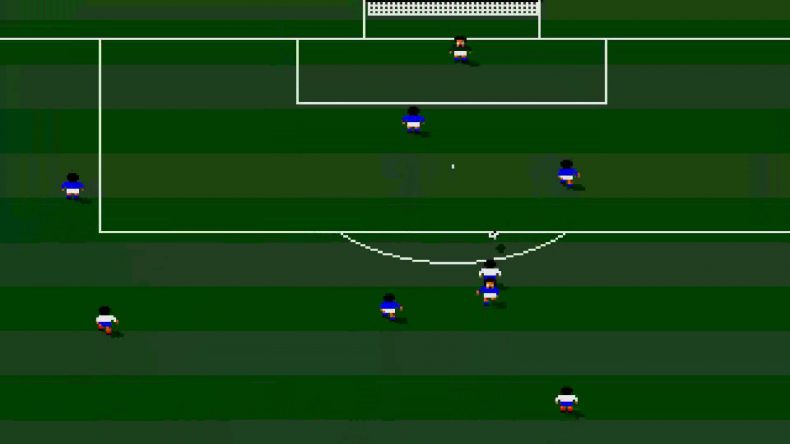 Recently, I had a chance to interview Jon Hare, the creator of legendary footie game Sensible Soccer, and most recently, Sociable Soccer. They talk about Jon’s reasons for making another football game and the struggles with Kickstarter, improvements to the game, and plenty more.

It’s been a decade since the last Sensible Soccer release, what made you return to that brand of football now?

I have been wanting to do a new football game since 2008 when I was working with Mev Dinc on his I-Can football PC title in Istanbul, Turkey. This was the first time I had been involved in an online football game and inspired me to consider a Sensible Soccer inspired new online football game where you could represent the club or country you support, like a clan. It took me a long time to find a team I felt I could trust to create this new game and when I met the guys from Combo Breaker, a new Finnish team made up of industry veterans like me, I jumped at the chance. It is also a happy coincidence that now is a great time to make a new football game on all formats, PC and console because of the lack of new titles that can take advantage of 3 minute online e-sports style play and mobile because there are really very few decent football action games out there.

When the Kickstarter campaign didn’t reach its goal, what drove you to keep pushing to get to the Early Access point you’re at now?

Well it has been financially painful for us to soldier on this far but we have been determined not to give up. The big difference between now and the Sensible Soccer years is that in the old days publishers would pay us advances during development which helped us finance the games construction. Now we have got through with a few share sales on the Combo Breaker side, some help from the Finnish government, many months with low or no wages and some of us taking no money at all and instead just putting money in. What has kept us going is the knowledge that we have a great game that is just right for modern platforms and the fact that we all enjoy working together. Once the AI is fixed, which I know is high on the priority list, how will you ensure that it remains fun and playable for all players?

There are so many things to do, I have just added a list of 19 key things to add to the game between now and full release. Apart from the obvious improvements to AI and goalkeepers the big ones are: Online play, entering your own team in online leagues with 30,000 upgradable and collectable player cards, DIY competitions, new season data and data editing ability, Tactics menu, deeper tactics options, bans, injuries and substitutions, improvements to Boss Mode, ability to make and share videos from replays, adding Man of Match award for each match tied into the Boss’s scouting book and tons of improvements to HUD, menus, sound and last but not least animation.

Multiplayer is obviously a big focus for Sociable Soccer; once the online is up and running, how will you keep matchmaking fair?

The online leagues divide players into 10 divisions based on how developed their online team is, so you will always be playing within your ability range. For friendlies you can also choose to equalise player skills so that Big teams like Barcelona can compete on a level playing field with lesser teams like Dover.

My Team sounds like it will be very much like your take on FIFA’s Ultimate Team; how will player cards be collected?

Firstly you choose one of 830 world clubs that you wish to be representing as your team, we then populate this club with 18 low level players, so everyone starts the same. All of our 30,000 players are represented as player cards, each player is evaluated from 1-500 stars. You then play a never ending series of matches against the fans of other clubs online. Every time you win a match you get a new player card with its back turned, you can then decide to either take the new player card or risk playing again to more than double the cards star value if you win, or lose it if you lose. Doing this repeatedly over time you build up a better squad and can then swap a number of your lower value cards for better player target cards who will tend to be cards representing MVP players from boss mode or players from the club you have chosen and then slowly up to the famous big name footballers that everyone will want. Additionally 5,000 of our player cards are classic players from the past of that club, these players will appear temporarily from time to time like special weapons to bolster the team.

For those players of serious games like FIFA and PES, how would you convince them to give Sociable Soccer a chance? Boss mode is pretty fun, especially with the daft caricatured manager/chairman characters; what made you choose to go that route, rather than the usual career mode?

Boss Mode is actually a supporting mode for the online leagues to follow, it allows you to upgrade your manager and discover player talent from around the world, both of which are used for My Team in the Online Leagues. We feel that player card collecting and upgrading is more appropriate for modern users and that we cannot easily accommodate a card collecting Team mode and a Sensible World of Soccer-style career mode in one game. Also a SWoS style career mode relies on pre-set leagues and cups, leading to potential online fixture fulfillment problems that we totally sidestep with the card collecting mechanic. Finally I am not sure a SWoS style 30,000 player market will work so well seeing as none of the players are licensed so their names are all messed up.

Will the planned Manager mode allow us to actually play the matches, or will it be management-only?

Manager mode refers to what we used to give people in Sensible Soccer, the ability to just sit back and watch a game, in any game mode, instead of controlling the action with a controller.

It’s great to see that the team has already been busy fixing a few of the launch issues; is this taking away from the development of new features, or are they still on track?

I am old school so I would have preferred it if we had been able to launch with no bugs at all, however the bug fixing and tuning is not affecting the addition of new features too much as of yet, thankfully. Fans are already throwing their ideas at you, have any of those ideas stuck? Which idea has been the best, so far?

A number of people have described ideas close to what we plan for My Team card collection mode, these are my favourite ideas, I am very keen to get this flagship game mode completed.

I know you’ve said that cross-platform multiplayer is already up and running between PC and mobile, will that be available upon multiplayer launch or is it something we’ll just see when the game is complete? How likely is it that we’ll see console versions involved in that?

Cross platform multiplayer is totally up to the platform holders, if they support us we will deliver.

Will the console versions appear alongside the PC version leaving Early Access?