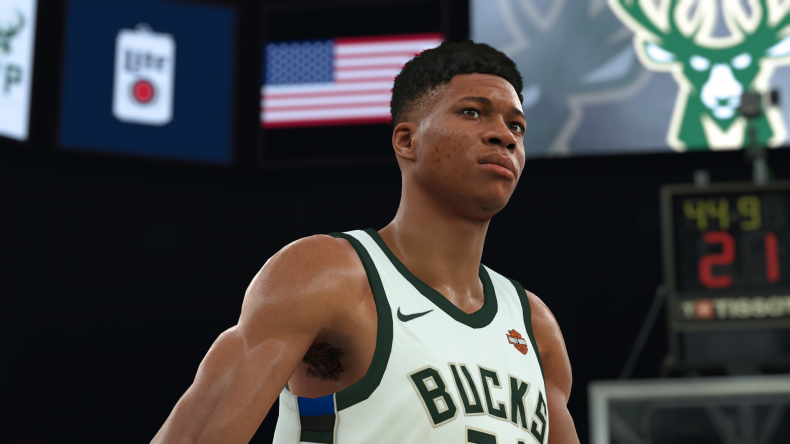 Giannis Antetokounmpo is perhaps not a name many outside of the US or Greece will know. The 23-year old plays for the Milwaukee Bucks in the NBA and despite his young age has quickly dispatched the tag of rising star, and is now easily one of the best players in the league. Over the last two seasons he has improved on all his major stats, and has joined the iconic players that make up the NBA’s elite group. He may not have the name calibre of a LeBron James or Steph Curry, but his skills are certainly on a similar level.

That makes it sound like his inclusion on the cover of NBA 2K19 is nothing special, another run of the mill cover that features one of the NBA’s best players as per usual. Technically that is the case, but this cover is different, not just because of its design which is one of the more unique sports game covers, but because Giannis is the first ever NBA 2K cover star not to come from the States. When you consider that NBA legends such as German player Dirk Nowitzki never received that honour, this is quite the achievement for the young Greek player. It is also one that he is taking very seriously. Time and time again we see sports stars brought out for publicity events and they look disinterested, and clearly are only there for the money, but when Giannis takes the stage at the cover star reveal event in his hometown of Athens he is visibly excited.

After a brief Q&A the 2K team tease the reveal of the first in game screenshots of 2K19, and Giannis jumps to his feet as the image is displayed on a screen that dwarfs even the NBA star himself. Giannis’ face in game is shown and it looks pretty impressive, but almost instantly the man himself bounds over to the screen to excitedly point out the detail in his facial hair.

“The majority of [NBA] players love 2K,” says Ronnie “Ronnie 2k” Singh, the digital marketing director for NBA 2K and the face of the franchise. “We had over 200 people ask for their rating in NBA 2K18 and I fully expect that to be even more with this new class of guys we have coming in for 2K19. It’s a nice break for them, we are not another brand that is trying to force a round peg through a square hole. It’s natural, they are in the game, they can speak about being in the game. It’s a badge of honour for them.” As the event draws to a close Giannis is presented with a custom Xbox One and genuinely looks excited by it. He walks off the stage and into the maze of back rooms at the fancy hotel where the event was held, which is a far cry from the area of Athens that he grew up in; Sepolia.

Sepolia is not a particularly well off neighbourhood, and certainly not one that many tourists will ever see. However, in the middle of the area, surrounded by large apartment blocks, there is an outdoor basketball court, the one that Giannis grew up on. These days it features a full court mural of the man himself, brightening up the area significantly. As a gaggle of of games and basketball journalists try to figure out how to get the ball through the hoop (a task more difficult than you’d think), a young local kid appears at the other end of the court and immediately shows all of the adults up with his skills. 10 years ago this could easily have been Giannis himself. Having grown up on the street courts of Athens, Giannis made his way through the European leagues at an early age before declaring for the NBA draft and being picked by the Bucks as the 15th pick in 2013. His story really is one that you rarely see in the world of American sports. He didn’t attend a top college, received no scholarship and was unknown by many fans when he entered the draft. This, along with his unbelievable skills on the court, made him the obvious choice to become the first non-American cover star for NBA 2K.

“I think it’s about Giannis, he is the perfect build for the story we are trying to tell,” says Ronnie 2k. “He has such as great background and he is the prototypical video game character, when you think of building a guy in game you think of building a guy like Giannis who can do it all. And he loves 2K. So I think a combination of all that stuff made it a very easy decision.”

Giannis Antetokounmpo is a name that will no doubt be etched into the history books of the NBA multiple times, but now he will also be a legend in the world of video games. Becoming the first ever non-American cover star for the NBA 2K series is a big deal, one that shows that not only is the NBA expanding its reach worldwide, but that the 2K series is bringing the world of basketball to many new audiences every year. Having someone that enthusiastic about the game, that has such a great story and can open up the franchise to a much larger European market is great for everyone involved. And it also resulted in one of the best sports game covers ever.

eSports! I joined God is a Geek all the way back in September 2013 and since then have spent most of my time on Dota 2, and occasionally posting the odd review, news article or totally wrong predictions for The International. When I am not playing Dota I can probably be seen watching some kind of strange eSport or begging for more Twitter followers (@MikeStubbsy if you are interested). Aside from GiaG I am a computing student, football coach and major Apple fanboy.
MORE LIKE THIS
nba 2k19

2K Foundations to Support Communities Across the U.S.