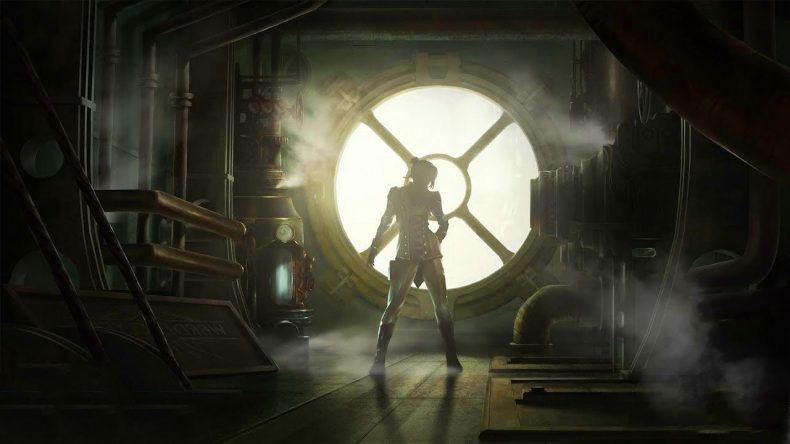 As Rose read out the letter from her sister Ada, asking her to come to her aid on the Helios, a massive ship complex powered by Nicola Tesla’s technology, I wondered what to expect from Storm In A Teacup’s horror adventure.

Close to the Sun takes place at the end of the 19th century, in an alternate history in which Nicola Tesla seems to basically be the world’s leading power (heh) in both technology and weapons manufacturing. Unfortunately, Tesla also appears to be an insanely paranoid douchebag, sealing himself and his operation inside a massive floating complex. He believes everyone is a spy for Thomas Edison, his rival in the world of electricity and invention, to the point that he even has his security teams interrogating those he believes are Edison’s people, with deadly results.

As you might expect, when you arrive on the Helios, things aren’t looking too good. Well, they look good in terms of the visuals, but the situation looks a bit rough. The docking bay is abandoned, with boxes and luggage strewn about the place, conveniently funnelling the player toward the entrance to Helios proper. After squeezing through the doors, they slam shut behind poor Rose, revealing the word “quarantine” painted on the inside, in an ominously crimson shade. The first thing you’ll probably notice about the visuals, is that they have a distinctly Bioshock flavour to them, albeit with a hint of The Order: 1886. The Helios looks like it could be a part of Rapture, not to the point that it could be considered too similar, but it certainly feels like Irrational Games had an effect on Storm In A Teacup’s design process. Close to the Sun has a more steampunk bent to its design however, merely stirring it into the pot along with some art deco styling.

That is where the similarities end, however. While Close to the Sun is a horror game, it doesn’t really offer much in the way of scares in the opening chapters. Instead, it slowly builds the atmosphere as you wander slowly through the corridors of the Helios. Lights will flicker and blow out, and doors will slam shut, but nothing actually harms you. You’re only left with the promise of something that might happen. Your job is to investigate the scene, piecing together information about what had happened aboard Tesla’s floating fortress. You do this by reading newspapers and various other documents that have been left lying around, and by taking in the environmental clues.

You will also see ghostly images of the Helios’ inhabitants, seen as glowing, swirling figures. This is down to some form of time anomaly, which is teased during the early game, and it allows Rose to see glimpses of the past, though the preview build I played stopped short of giving anything away.

It’s this mystery that kept me interested, especially during the moments where the gameplay fell a little flat. The atmosphere is top notch, helped along by some outstanding sound and voice acting, but Rose is not a fast walker. She shuffles along at a slightly-too-slow pace, and holding the run button barely increases her speed above a brisk stroll. This isn’t too big an issue when you’re taking in the mysteries of Tesla’s facility, looking for the next piece of information that will help you learn the fate of those aboard the Helios, but when you have to move quickly, it just doesn’t work. This is especially apparent when the preview skipped forward a few chapters, and I soon found myself being chased by a knife-wielding maniac. During the first part of the chase, I managed to evade my pursuer, leading to a bit of fumbling around in the dark as I tried not to get lost in the awkwardly laid out sequence wherein my stab-happy friend was trying to locate poor Rose. This all felt very Outlast, but with less of the quality of Red Barrels’ modern classic, and this was made abundantly clear in the next sequence as I was forced to run for my life once again. Remember how I said Rose wasn’t fast?

Well, she certainly wasn’t fast enough to outrun the preview’s first enemy, and I found myself frustrated as I was constantly caught and turned into a human sieve in the exceedingly violent death that followed. I cannot stress enough how much I just wanted to give up, after half a dozen unskippable stabbings and no sign of how to escape further bloody endings. In a chase sequence, it’s poor form for the player character to be physically unable to outrun the enemy. There is even a “look back” button, which I used to see him gaining on me with every second that passed. It wasn’t scary, it just elicited a response of, “what the fuck, how do I do this?”

This whole scenario also highlighted some of the other problems in Close to the Sun, such as there being no real direction to the scripted events. You can easily miss scares or environmental cues, because there is very little to direct your eye to important areas. I lost count of the number of times that the music kicked in and I found myself looking everywhere to see what I might have missed, only to just catch the tail end of something. This is also a problem when you can only move past very specific objects via context-sensitive prompts, despite your way usually only being blocked by a chair or something else that could easily be moved or stepped over. In a genre where it has Amnesia for company, I don’t think this kind of movement restriction is acceptable today.

The things is, Close to the Sun has a lot going for it, in terms of its setting and intriguing story, but its strangely awkward gameplay mechanics could really hold it back from fulfilling its potential. The way it builds the atmosphere in those opening chapters is masterful, but as soon as enemies are involved it struggles and that is something I really hope Storm In A Teacup manages to fix before release, because I would love to spend more time aboard the Helios, figuring out its mysteries.

Features, Previews
Close to the SunStorm in a Teacup

MORE LIKE THIS
Close to the SunStorm in a Teacup