Sekiro: Shadows Die Twice is an elegant evolution of everything FromSoft do so well 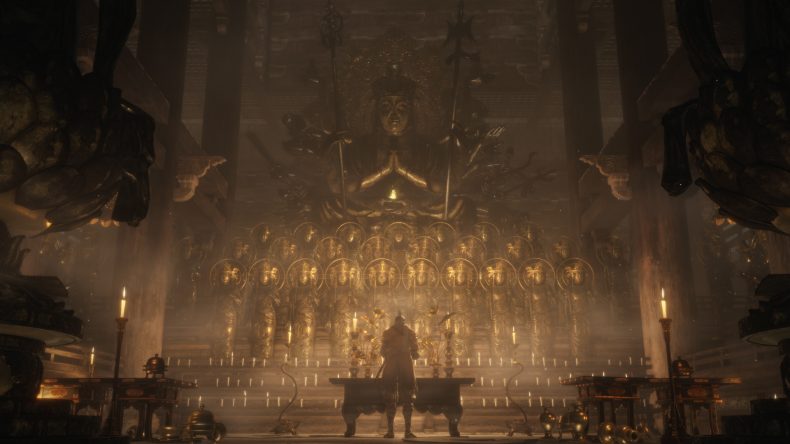 It’s impossible to deny there’s something unequivocally special about FromSoft games. Be it Dark Souls or Bloodborne, each arduous journey is a stark lesson that patience is indeed a virtue. Success isn’t achieved by flailing a blade or spamming the attack buttons, but by watching your enemy carefully, engaged in a respectful dance of death as you wait for an opportunity to strike. There’s no refuting Sekiro: Shadows Die Twice follows many of the tropes of a FromSoft title, but the mechanics have evolved.

You’re still tested in the fires of battle, and enemies still have distinct patterns of attack, but you’ve got some specific new abilities which make the art of war more graceful. I had the pleasure of playing around two hours of Hidetaka Miyazaki’s new game, and whilst there was an uncomfortable amount of death on my part, I got to appreciate the changes, both subtle and substantial, that the team has employed to make this more than just another ‘Soulsborne’ game. The environments I saw made it clear that this wasn’t to be another gothic nightmare. There’s a lot of beauty in your surroundings, which at times adds to the eerie sense of serenity. One such location was Senpou Temple, filled with luscious trees and the chanting of monks. Moving through the thick grass (which you can hide in), I spotted these monks as they prayed. The second they see you, though, that calm is shattered in cascades of violence. The Hirata Estate is draped in fire, drowning in orange flames which add to the anxiety I felt travelling through the wreckage of the burning wood. Huge statues adorned the rooms, and with a rousing soundtrack to accompany the terror, Sekiro has that visual and audio perfection we’ve grown used to in From games.

You play as the “One-armed Wolf,” a pre-written protagonist who renders character creation obsolete, along with many of the RPG elements of Sekiro’s sister titles. The focus is on the tactical decisions you make in a swordfight and the ability to move fluidly though the stunning Sengoku Period environments that From Software has built so masterfully. As the wolf, you are equipped with a katana and a prosthetic arm that can be fitted with a range of appendages, including a grappling hook, that aid in battle and traversal. The stamina bar is absent, so movement feels natural and at the same time meaningful. The first area beyond the tutorial was filled with autumnal flora, battered strongholds, and cliffs I was able to grapple onto, traversing the area efficiently and swiftly. When a green icon appears, a simple press of the L2 button lets you hoist yourself to a higher point from which to survey nearby members of the Achina clan. Points of grapple appear often, but you need to be within a certain range to be able to attach your hook to them.

Something I loved was the ability to jump into the air, or off a tall building, before launching my hook mid-plummet to pull myself towards a hanging tree branch or nearby cliff edge. There’s a great diversity in how you can move about with you grappling hook – something that feels alien and yet ultimately refreshing in a FromSoft game. You embody the Shinobi in all its glory, using stealth to find a perfect vantage point from which to strike, and it’s gratifying as you take out multiple enemies without so much as a whisper. From above you can drop down onto foes and kill them in silence. An illuminated red dot appears on their back signifying a stealth kill is available, and with a tap of the R1 button you’ll plunge your katana deep into their unsuspecting flesh, causing a waterfall of blood to fountain from their wounds. It’s as beautiful as it is horrific, embodying the kind of wondrous gore seen in movies like Blades of the Immortal and Kill Bill. You can also sneak up from behind and do the same, and silence is as much your ally as the blade itself.

Whilst using stealth is the better option, there’ll be times when facing your enemies is a given, but this is where gameplay feels very differently to that of both Dark Souls and Bloodborne. As mentioned earlier, the stamina bar doesn’t exist. Combat now revolves around poise and posture, and after breaking down an enemy’s defence, you are provided with a moment to deliver a killer blow. It makes fights more meaningful and means you approach each encounter with an added air of strategy. You block with L1, but also use it to parry, catching rival samurais off-guard, and by pressing R1 at the right time you can deliver that final strike – although some of the tougher enemies won’t die after one blow. Above their health bar will be red dots, each one indicating how many of these decisive hits it’ll take to kill them. This is where the difficulty really steps up: approaching someone with two dots means a longer battle is afoot, so making sure you have maximum White Spirit Emblems and Health Gourds is key.

One way in which Sekiro does share similarities with what’s come before is the different items you must use against enemies, or to help yourself. Fistfuls of Ash can be thrown to temporarily blind, and Ceramics can be thrown to distract. Oil can cover areas or enemies so you can set them ablaze, and specific Sugars can provide temporary boosts to attack and defence. Whilst Health Gourds provide a substantial increase to your vitality, Pebbles can be found and used to resupply health, even if it’s not quite as much as you’d like. It wouldn’t be right if death wasn’t your teacher. Thankfully, Sekiro gives you a lifeline. At each Sculptor’s Idol (think Bonfire), not only do you replenish your Health Gourds (Estus Flasks), and your White Spirit Emblems (an item needed to use your prosthetic’s attachments), but it’ll give you back one chance at resurrection. This means a great deal in those moments when you get caught out by an opponent’s almighty attack, only to be thrown one more chance without returning to the last Sculptor’s Idol you rested at.

In the time I spent with Sekiro, I fought enemies that launched burning arrows at me, rushed at me with huge spears, matched my strength with swords of their own, and herculean ogres that thrashed their fists with otherworldly rage. I tangled with a mid-level boss shackled by chains, using his arms to grab me and smash my body hard into the ground. I had to adapt with each encounter, and learning when to strike became a challenge within itself. Some enemies took less time to dispatch, and I’d become too complacent, allowing my over confidence to get the better of me. Dodging is still a massive part of combat, and to think anything different is arrogant, as I found out all too often. Instead of having a light and heavy attack, the R2 button is now used to play with your prosthetic upgrades. I managed to play around with some of these, and they gave me some advantages when approached by the enemy. One such weapon was a giant axe that, while slow, deals a decent amount of damage when used at the right time. I also had a ranged attack in the form of the Shuriken, so whenever a distant archer fired at me, I’d dodge and launch a slew of metal stars to take them out. Using them against enemies with shields or swords was less effective as they can block them, but at the right time when they’re off guard, I could still make use of their deadly advantage.

Sekiro: Shadows Die Twice is a much different game to what’s come before, but the similar teachings we’ve been privy to from Miyazaki and company sit at its heart. The ability to jump, reach greater heights with the grappling hook, and use brand new attacks with the katana are all original, but knowing when to strike and mastering the art of the dodge are all just as imperative as before. These new mechanics won’t divide fans of From Software – quite the contrary – they’ll push them to learn new ways to take down the wave of evil terrorising their version of 16th century Feudal Japan. Less RPG and more action, Sekiro is the next punishment you’ll visit upon yourselves, and the demonic forces at work in FromSoft’s latest epic will make fighting the monsters of Yarnham seem like child’s play.

Video games are cool. Don't let anybody tell you any different.
MORE LIKE THIS
ActivisionFromSoftSekiro: Shadows Die Twice