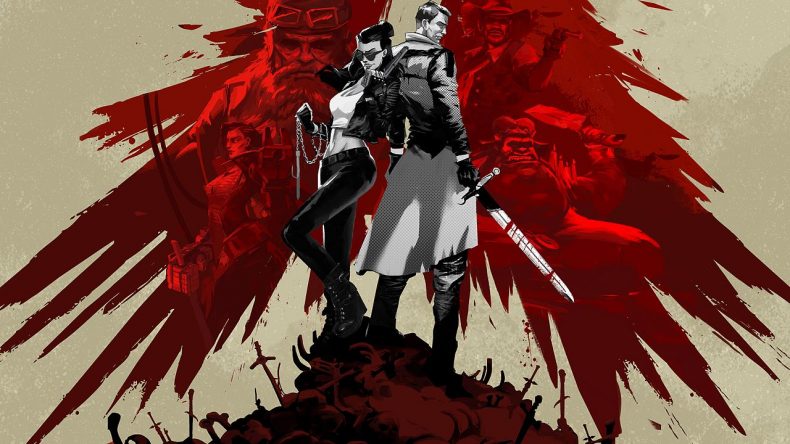 Things must be pretty bad when a demon and an angel have to team up. But that’s exactly what happens in One More Level’s violent action game, as angel Harry and demon Judy are forced to team up in order to prevent the apocalypse. When I say this is a violent action game, I’m not kidding. There’s blood everywhere during the ludicrously fast-paced action scenes, so if a bit o’ the ol’ crimson sets your stomach churning and your gag reflex going, God’s Trigger ain’t the one for you.

So who is it for, then? Well, not to put too fine a point on it, it will appeal directly to fans of Hotline Miami. God’s Trigger uses the same top-down viewpoint and a similar style of fast-paced, one-hit-kill action as Dennaton Games’ modern indie classic, but it’s far from a clone. This is down to the powers, level design and storytelling, which all combine to give the game its own personality. As you kill enemies with either character, a meter will fill up and allow you to perform various special abilities, with more powerful skills requiring more of the meter to be filled. These range from turning invisible to get by traps and enemies, to Judy’s ability to charm men into killing their friends. Harry can also use a dash move that will smash through weakened walls and stun foes, while Judy can move through metal bars like Robert Patrick’s T-1000 from Terminator 2, only without the liquid foil look of early 90s CGI. With a tap of the B button (I played using an Xbox One controller) you can switch characters on-the-fly, although it’s possible to double the fun and play in co-op.

All these powers came in handy as I took on the Western-themed levels of the preview build’s opening chapter. Aside from these, I also had Harry’s sword and Judy’s throwing blade at my disposal, as well as being able to pick up the guns and dynamite sticks of fallen enemies. Using a twin-stick setup, as well as the ability to look ahead to the next room and “tag” enemies for quick kills, God’s Trigger is incredibly easy to play and the action is as fluid as you could want. I mean, you’re going to die a lot, but thankfully its checkpoint system means that you won’t have to repeat entire levels if you make a mistake and redecorate a room with your freshly-blown-out brains. Checkpoints don’t mean that you’ll have no real issue getting through each level, in case you’re one of those purists that hates difficult games being made more accessible. The level design and the dynamic way the AI responds to the way you tackle each situation, ensures that things will never happen the same way twice. Just because you took out that guy with the shotgun first, before handling the two hatchet-wielding native Americans, doesn’t mean that it’s guaranteed to work every time. You might mess up a stealth kill and expose yourself to a bullet in the face, or in one particular case, you might be torn to shreds by a chaingun. To shreds, you say…

That section was probably the only part that almost stopped me in my tracks. I had to get to a guy that was manning a chaingun turret, but I had to do it via an open street with very little cover and it seemed blind luck that I finally dashed my way into cover and eventual triumph. The level design was normally excellent throughout the preview, but that one segment felt a little off, making for a difficulty spike that felt plain unfair. That being said, I’ve grown a little slower as I age and my reflexes aren’t what they used to be, but God’s Trigger rarely made me feel like I couldn’t get through its challenging levels. I enjoyed running into a room and taking down a group of enemies with both blade and bullet, and even when I did die (which was often), it was mostly down to my own errors and I would learn from them, before diving back in to shed a little more blood in the name of preventing the world’s end.

I enjoyed God’s Trigger’s almost comic book visuals and cheesy-but-fun story scenes, reminding me of From Dusk Till Dawn but without Tarantino’s need to overwrite dialogue. There’s a hint of an action movie vibe, with a plot that did just enough to keep me wanting to see what happens next, but not enough to go all Metal Gear Solid on us and develop a need for ninety minute cutscenes. When all this is combined with such fluid and fun shootouts, and that one-more-go factor any Hotline Miami fan will know oh so well, it all adds up to a game that you might want to keep an eye on this April.