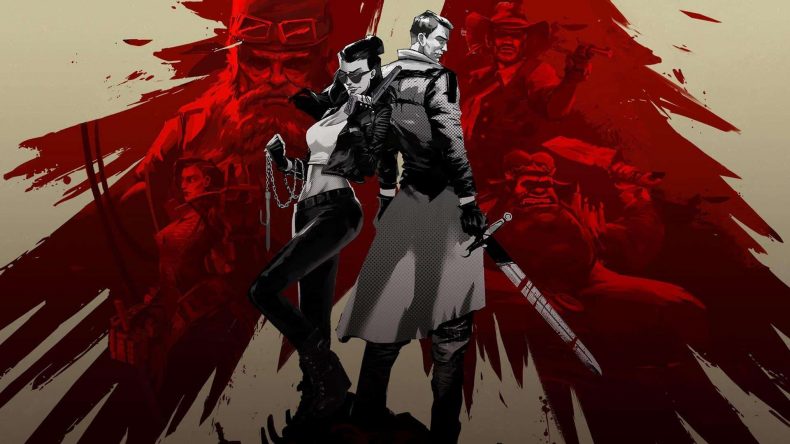 For those who don’t take religion particularly seriously, there’s a wealth of mythology and lore mixed up among the various messages about essentially not being a dick to other people. Hollywood (and I use that cliché term broadly) has made millions from comics that made decidedly less by cherry picking elements of world religion (usually Christianity and Catholicism, to be fair) for their stories. Hellboy, Constantine, and Preacher are prime examples, while in video games we have Darksiders, Devil May Cry, or Dante’s Inferno.

There’s a weird link between Christian mythology and being metal as fuck that I’ve never fully understood, though I suspect it’s something to do with Meat Loaf. Anyway, the point is that usually when Christian mythology is channelled through another medium, it’s first percolated in a jar of leather pants, tattoos, rock music and violence. I’ve read bits of the Bible, and I kind of get it. Which brings us to God’s Trigger, a game by Techland, a developer and publisher with a somewhat eclectic list of credits including Call of Juarez, Dying Light, Torment: Tides of Numenera, and Dead Island. A game by them called “God’s Trigger” could have taken on any of half a dozen final forms, but it settled on a Hotline: Miami-style splatter-fest. In fact, the religious undertones seem more of an explanation for why the protagonists can use magical powers than to send any kind of ecclesiastical message.

As the bizarrely named Judy and Harry, a Demon and Angel respectively, you’re charged to stop the Apocalypse by shooting hundreds and hundreds of demons, monsters and mortals in the face. Initially you’ll hunt down the four Horsemen, because of course, and steadily grow in power. What’s weird is that I kept forgetting I had powers like invisibility, mind control, and slow time. There’s something about God’s Trigger that’s so comfortably pedestrian that I was mostly happy with sword and gun. You can switch between Judy and Harry with the push of a button, in order to make use of their different skills. Harry’s angelic blade cuts in a wide arc, while Judy’s demonic hook does damage in a straight line. He can dash through walls, she can phase through bars. He has passive utility skills, she can make one goon shoot his best friend in the head. But the rhythm is so captivating that I often played almost entire missions as Harry, leaving Judy behind in terms of XP and unlocked abilities.

At the end of each stage you’ll earn a grade based on enemies killed, collectibles found, time taken, and number of deaths, which will have some people retrying levels just to try to improve their grade. Death drops you instantly at the last checkpoint, which creates an almost breakneck pace that’s hard to ignore, to the point where I often forgot there was a stealth option, complete with silent takedowns.

As you progress, the stages get more and more complex. Chapter Two is an early highlight, placing you inside a gothic cathedral filled with religious nutcases, devilish traps, floor switches and one very angry giant demon-worm. Never afraid to suddenly spring an ambush or throw a random trap in your way, God’s Trigger keeps you on your toes in a way even Hotline: Miami never did. Progression is a mix of determination and attrition, as you inch your way through the levels from checkpoint to checkpoint, sometimes by the skin of your teeth, sometimes by purely fluking it. But every checkpoint is a tiny relief, and coming up with ever more clever and violent ways to eviscerate your foes is always satisfying. I found it began to tire me out after long periods, so I’d dip in and out for a few levels at a time – but would occasionally get stuck in a loop of dying and retrying. It’s that kind of a game. Sudden difficulty spikes are the order of the day, but if you can keep your head and persevere, it’s worth it.

Despite being fairly light on story and pigeon-holing its protagonists (I’m sure the only reason the woman is always the “demon” is for an excuse to dress her in tight trousers and make her speak purely in Sass), God’s Trigger is a vibrant, violent romp through Heaven, Hell, and everywhere between.

God's Trigger is a vibrant, violent romp through Heaven, Hell, and everywhere between