previous
The Music of Red Dead Redemption 2: The Original Score is out today
random
next
DiRT Rally 2.0 Seasons 3 and 4 Will Start From This Month
0 comments 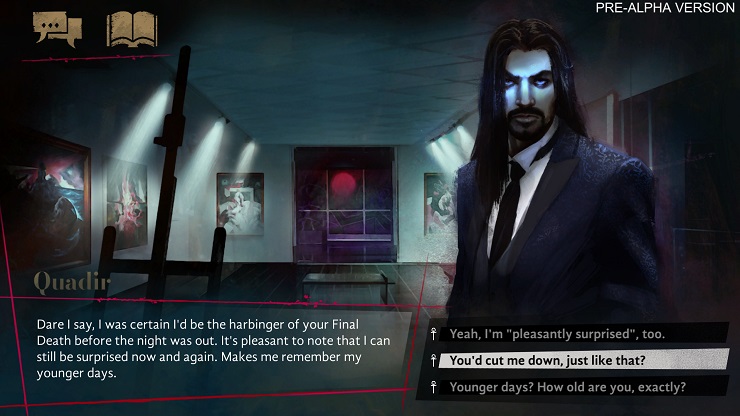 Draw Distance are the team formerly known as iFun4all and they’ve just shared new information on their new Vampire: The Masquerade game ‘Coteries of New York’.

The developers are bigging the game up saying that it’ll be the perfect entry point for players new to the series while also holding appeal for those who are invested in the series. There’ll be a focus on choice, giving players challenging moral dilemmas which could see you taking a completely different route to the finale than everyone else.

Players will take up the role of a new vampire in New York learning what it takes to be one of the blood-thirsting undead. You will be centre stage in a power struggle between the Camarilla and the Anarchs while building your own Coterie and aiming to keep people loyal to you.

The game is primarily text based, but there will be moments where you will need to feed and you will do this during quests. Ignoring the need to feed can see your character submitting to more primal urges and could see you lose standing within your Coterie. As well as this, feeding in such an animalistic manner can see you lose some of your humanity, this will see you lose moral standing and can drastically change the way the story plays out.

Lastly there’s the Masquerade rating which tracks how well you blend in with human society. If you do too much to draw attention to yourself you could find yourself being hunted by New York’s vampire hunters – the Second Inquisition.

There’s no hard release date set as yet, but expect Vampire: The Masquerade – Coteries of New York to hit PC and Nintendo Switch in Q4 this year.

A lover, not a fighter and an all round good guy (he would say that, he wrote this after all), he's happy to be here as part of GIAG.
MORE LIKE THIS
Draw Distanceifun4allnintendo switchPC