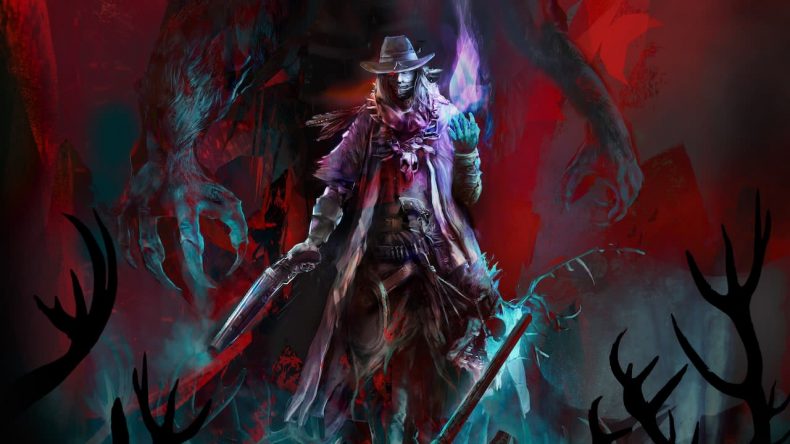 Ritual: Crown of Horns is a top-down twin-stick shooter with a bit of a difference. For a start it’s a Western, set in an alternate history in the year 18XX, and features an Old West rife with dark magic and sorcery.

Protagonist Daniel Goodchild is a legendary bounty hunter and dime novel celebrity who has been hired by some shady branch of the US government to track down a witch hiding out in the hills and kill her. However, once he gets there, it becomes apparent that she’s not the problem – but rather the only person with a solution to the rash of ritualistic murders ravaging the land.

When Goodchild finds himself chopped up with axes at the mercy of a demonic cult, it’s the witch, Elizabeth, who resurrects him, and offers him a deal: protect her while she travels the land performing rituals of her own that will cleanse the evil wherever they find it. Which is pretty much where you come in as the player. Slipping into Goodchild’s ragged ten-gallon hat, your job is to keep the cultists at bay while the witch does her thing. Each stage takes place in a confined arena, usually with the witch at the centre (although in later stages she moves around a bit), and sees you moving swiftly from point to point blowing away enemies who approach you quicker and quicker and in greater and greater numbers. Initially you’re armed only with a six-shooter, but you’ll eventually pick-up shotguns, coach guns and crossbows, as well as wield various spells.

The shooting is pretty satisfying, too, as you use the left trigger to aim and the right to fire, while strafing around the little arenas trying to watch all angles at once. It’s a game of long, long minutes, where each stage has a relatively short timer that seems to take forever to count down when you’re in the thick of it – and make no mistake, Ritual: Crown of Horns is a tough game. Enemies will swarm you if you’re not careful, although because it’s not procedural, you can learn the patterns of each stage and with every death, improve your movement and shooting to stay alive.

Souls stolen from your vanquished enemies act as a currency for dashes, spells and tools, so the more efficient your shooting, the more tricks you’ll have on your side. Coloured orbs drop here and there – gifts from your arcane ward – that briefly boost your running or reload speed, or refill your health. You can unlock various hats and capes that apply buffs, or purchase them from various vendors who attach themselves to your entourage as you progress through the story. It doesn’t add much in the way of build diversity, but it at least gives you something to work towards besides ticking points on the map.

As the difficulty increases, Ritual: Crown of Horns can become a little repetitive, It feels like a game that would be best enjoyed on the Switch (and indeed, it is available on that platform), because it seems built for small bouts of frantic gameplay. It looks decent, though, with an almost paper-craft art style shot through with lashings of black, red, and yellow. The simple story is told well enough too, with some decent writing despite a lack of spoken dialogue.

Ritual: Crown of Horns is an enjoyable experience, but one that seems determined to frustrate through its unforgiving difficulty and repetitive nature. Its soul is saved, though, by a grimly pretty art style, heaps of atmosphere, and satisfying, punchy gunplay.

Ritual: Crown of Horns is an enjoyable experience, but one that seems determined to frustrate through its unforgiving difficulty and repetitive nature. Its soul is saved, though, by an grimly pretty art style and satisfying, punchy gunplay.