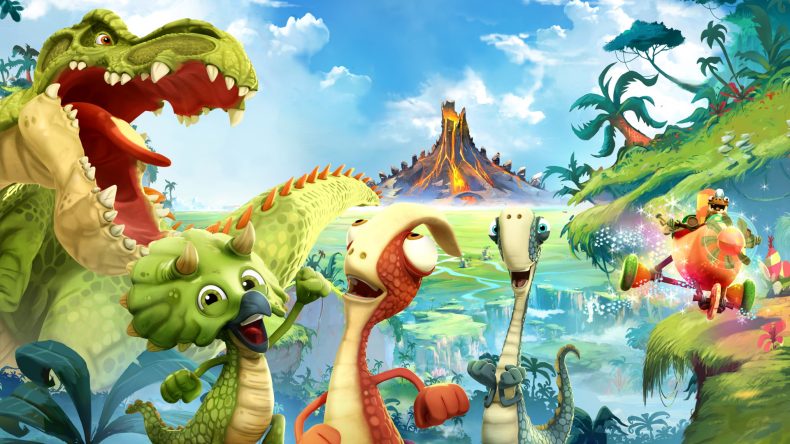 It’s quite rare these days that I get to sample a game made purely and exclusively for kids. As an avid fan of explosions and violence, I usually avoid games aimed at a younger audience, but when I got the opportunity to check out Gigantosaurus: The Game on Nintendo Switch, my own little bundles of joy urged me to jump at it. Having helped me preview Outright Games’ dino-sized adventure on PC, they were eager to play it on the family-favourite console – and none of us was disappointed.

I’m not going to pretend I understood most of what was going on, and given the choice I’d have probably given it a wide berth – but then I’m not the target audience here, and Outright Games understand their audience completely. Gigantosuarus: The Game is entirely non-violent, yet the gentle platforming and logic puzzles provide younger children enough of a challenge that they get the same buzz as older gamers when hitting milestones. In between levels that see you collecting up lost dinosaur eggs or planting seeds, your primary goal is simply to work together and help out the residents of your little prehistoric world – especially as the titular Gigantosaurus is currently on a very growly rampage because a meteor has plugged up his volcano.

While the levels themselves are enjoyable enough, and take place across four different biomes, the mode my kids kept on going back to was the kart racing. It’s as simple version of the sport, but it’s fast-paced and enjoyable, throwing in Mario Kart-style power-ups and speed boosts. As fun as it is though, it isn’t over-used, and the bulk of the game is spent helping the four pals, Tiny, Mazu, Rocky and Bill, navigate their world and perform various tasks for the residents.

Other characters from the Disney Junior show (and its source book by writer and artist Jonny Duddle) show up now and then, and in particular a pair trouble-making velociraptors often turn up just to give you a new problem to solve. The show’s themes of teamwork, self-belief and exploration translate well into the game, though I’ll be honest that my kids tended to skip most of the talking and work the rest out as they played. It’s testament to how simple it all is to play that they rarely got confused or felt unsure. Gigantosaurus: The Game is graphically very close to the look of the show. The characters are bright and colourful, and the environs are designed to appear inviting and safe. It’s hard to put into words how nice this title is, and how easy it is for small children to enjoy even if they don’t necessarily know the show or book. Also, my older children were able to help the younger ones through some areas where they needed a little guidance, which encouraged them to work together.

Designed entirely for younger gamers, Outright have created something genuinely pleasant and likeable in Gigantosaurus: The Game. It’s neither too twee nor insultingly easy, but rather presents a decent challenge for youngsters at a level that allows other children in the family to help out, and manages to not be irritating to mum and dad at the same time.

Won't appeal to anyone over a certain age
Does nothing unique

Designed entirely for younger gamers, Outright have created something genuinely pleasant and likeable in Gigantosaurus: The Game.