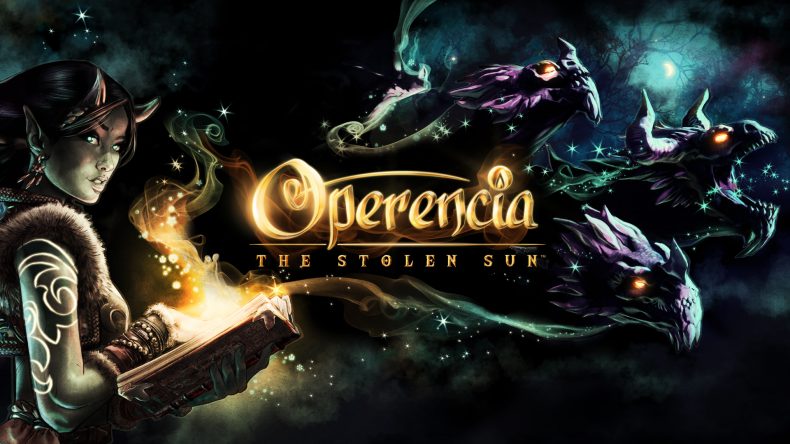 Operencia: The Stolen Sun is one of those games that I’ve seen floating around the sales pages of various storefronts for a while. I almost downloaded it on Xbox One a few months ago, and I’ve scrolled over it a few times on PC but always gone on to play something else instead. I haven’t been much into first-person dungeon crawlers for some time, but having recently reviewed Conglomerate 451 and now Operencia, I’m wondering if I’ve been missing something all these years.

I should clarify that Operencia and Conglomerate 451 are very, very different, by the way. Although both are blobbers (that is, RPGs in which you control an entire party as a single entity), the settings are very different. Operencia: The Stolen Sun is based on Hungarian folklore, and takes place in the titular fantasy world filled with the usual assortment of rugged hero types who like to wander through wildernesses that no sane person would ever traverse. After a tutorial section that sees you play as the former king of the land, you’re able to create your own character and select from three standard class archetypes, Warrior, Ranger or Mage. You move around a grid-based landscape which is actually deceptive in its design. When you turn the grid markings off, the art fools you into thinking it’s a standard first-person adventure and you forget you need to move square to square.

Combat is turn-based and sees your enemies lining up in handy rows to deal out or take damage that scales based on their positioning. Rangers, for example, are better equipped to deal with the back row, while putting hardy warrior types at the front is a sound strategy. You’ll mix melee and ranged attacks with spells and buffs, and to be honest it’s all pretty standard stuff. The opening few fights are pretty easy, but when the combat does ramp up it serves to elongate encounters rather than punish your actions. Enemies have more hit points, and deal more damage, etcetera, but it tends to draw out combat rather than end it quicker by whooping your butt. It’s unusual for me to pay much attention to the non-combat elements of an RPG (I’m usually more of a stab-first-ask-questions-later player), but the most interesting element of Operencia: The Stolen Sun is the alchemy. Rather than just throwing a pedestrian list of ingredients at you, it instead presents you with riddles to solve. It’s hard to explain, but it never simply shows you what you need, and instead requires you to identify what you need by solving mini puzzles. When you finally put the correct ingredients together and they add up to the desired elixir, it feels like you’ve earned it. I mean, as alchemy go it’s pretty impractical, but it’s a fun idea nonetheless.

I never really got excited when playing Operencia, though. At no point did I feel hooked enough to jump in and play more, but when I did play I enjoyed it. It’s a fairly sober game, although the various heroes and rogues you recruit to your party along the way are a likeable enough bunch. The writing has a wry tone, and manages to remain consistently entertaining if never thrilling, but there’s something very “plodding” about Operencia, and it gets more and more plodding as it goes on. It’s never ever bad, but it’s never more than good, either.# The Switch version doesn’t appear to have any extra bells and whistles like touch or motion controls, but the graphics hold up well, particularly in handheld mode. On the bigger screen some of the textures are a bit ruddier, but it’s not a major issue – though I will say it would have been nice if some of the enemies came in different colours or variations. Quite often you’ll find yourself facing three or more identical mobs and, while you can get away with that in other types of RPG, when it’s first-person you’re literally presented with a handful of identikit skeletons.

Operencia: The Stolden Sun is a decent slice of adventuring fun that feels like a bit of a weird fit for the Switch but functions well on Nintendo’s console nevertheless. I’m not sure it’s a glowing indictment of an RPG when the most praise is lavished upon the alchemy system as opposed to the combat or world-building, but Zen Studios have done an admirable job creating something that often feels unique, though rarely essential.

A little slow-paced
Setting is nothing new

Operencia: The Stolden Sun is a decent slice of adventuring fun that feels like a bit of a weird fit for the Switch but functions well on Nintendo’s console nevertheless, and often feels unique, though rarely essential.

You may also like
Operencia: The Stolen SunZen Studios