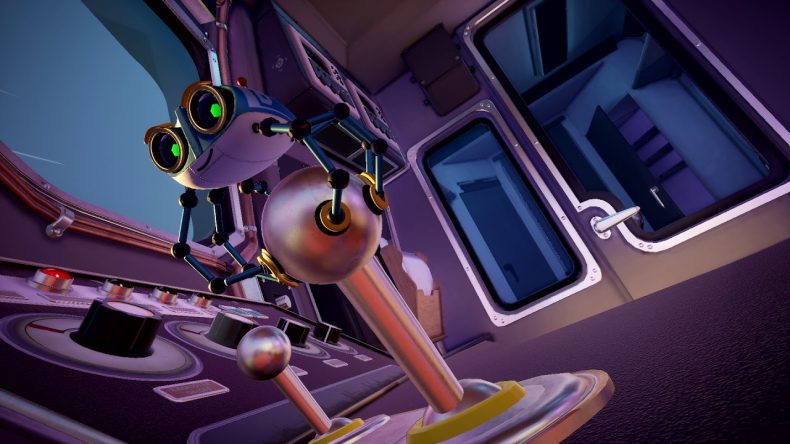 Sometimes, video games keep things really simple. They find their niche, their focus and intent, and double-down on it unashamedly. There’s no additional extravagance, everything is intentional, and often the reward for the player is a refined, targeted experience. Spyder is one such title, and if its name doesn’t give away what it’s about, the rousing intro score and stylish spy tunes certainly will. It feels like it was stripped straight from a cliched spy film or Austin Powers-style parody. Simple it certainly is, but for some, that strength will be a source of frustration too.

You are Agent 8, a robotic undercover spider who has to save the world one crazy, unbelievable mission at a time. You’ll be navigating submarines, satellites, fast-moving trains, and even missiles themselves to stop the evil SIN corporation from achieving their dastardly ends. Your small stature is actually an advantage, allowing you to move around unnoticed, as well as fit into the various nooks and crannies of surrounding machinery and wreak havoc. As Spyder is out on mobile devices, movement is managed through touchscreen inputs. You move by using the bottom left of the screen as your virtual analogue stick and swipe around with two fingers to move the camera for a better perspective. It works reasonably well, in that these controls feel responsive, but the decision to map the camera to two fingers means you can’t really move and manipulate the PoV as freely as you’d like. Often I’d stop moving to adjust the camera and then proceed, otherwise my hands were all over the screen, distracting me. As such, Spyder is much better when played with a controller, where the camera is mapped to the right stick, for much more free-flowing control.

As a robot spider, you can attach yourself to most surfaces with relative ease, and for the most part, can ignore the drag of gravity. This means you can shimmy up vertical climbs and even hang upside down on the underneath of surfaces as you crawl around the world towards your next objective. This allows for plenty of perspective-shifting traversals as you might be scuttling along winding pipes or up table legs to get to a new area. Pretty much any visible surface, apart from shiny ones where Agent 8 slips off, can be climbed, allowing for plenty of free-roaming exploration as well as clever use of intertwining level design to aid in your movement.

Being such a small robot instantly adds a sense of scale to proceedings as everything is much bigger by comparison, giving off a sort of 3D Micro Machines vibe. It also looks lovely as well, both in terms of the close-up environments and detailed backgrounds. As you move around the world, the camera does a pretty decent job of following you around, swooping in and around the various areas, adding to the grandeur of the world around you. Generally, the camera isn’t a nuisance although there were a couple of occasions where it would seem to get stuck and almost lose Agent 8 for a moment, making movement a little tricky. Moving around feels fairly responsive with Agent 8 scurrying about with a satisfying amount of control. There’s even clever use of momentum in a few places where you need to think a little harder and use the environment to your advantage. There were a couple of occasions where a mixture of the moving camera and curved surfaces made moving in the desired direction a little tricky, but after a bit of trial and error, you are soon on your way again. And these moments are far outweighed by large swathes of the game where the movement works so well, it almost goes unnoticed.

Aside from plenty of traversal options, Agent 8 also has a few gadgets up his sleeve, like any true spy. He can shoot at far off switches, as well as grab or grapple to far away objects. At various points in missions, he can even shoot a red-hot laser which burns through metal, or become a makeshift screwdriver to open up new passages. Whilst a lot of these mechanics are simple puzzle-solution ideas, the various chirrups coming from Agent 8 as he does them and the smooth animation during each one means they’re all well integrated into the experience.

For the most part, Spyder is a 3D platformer, where going to your nearest objective is most of the challenge. Occasionally though this is interrupted with some simple puzzle elements. None will tax you for very long, either through trial and error or because, to put it bluntly, they never really get out of second gear. Often the puzzles that take the longest are those that require you to find something hidden in the surrounding area that you need to progress. The rest are pretty obvious solutions, and many gamers will simply be going through the motions to move on to the next part of the mission. And with only six missions in total before the credits roll, and a total run time of about two hours it does feel a little short. Coupled with the simple puzzles, some of you may feel Spyder could have offered a little more. But, Sumo Digital has packed that two hours with some stylish music, almost comical settings and enough variety to keep you entertained, if not really challenged. And if anything, the fact that I was left wanting more is really a testament to my overall enjoyment.

Spyder is definitely a simple idea, but proof that one that is well-executed can still be a lot of fun. It’s packed full of style and a decent dose of charm too and is well worth investigating. If you go in not expecting a grey matter workout, you’ll likely find yourself appreciating other aspects such as the level design and other clever little ideas it weaves into its missions. Like Agent 8 itself, Spyder is small in size but has plenty of tricks hidden under its shiny carapace.

Edit (May 3, 2020): Thanks to its latest update, Spyder now has a new control scheme for touch screen users. You now control Agent 8 with the left side of the screen, and the camera with the right side. This is much more user-friendly, and improves the flow of the game.

Spyder is a quirky, stylish adventure with some interesting ideas and bags of charm. Just don't expect much of a challenge.