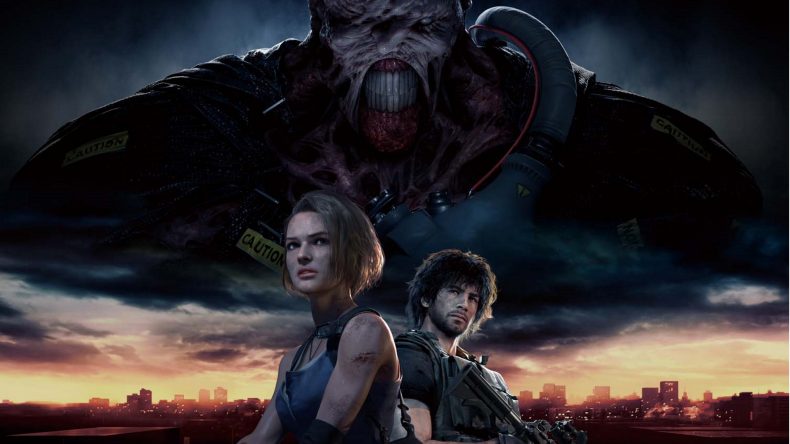 Last year we got to play a remake of what many consider to be the best Resident Evil game ever in Resident Evil 2. Visually, it was delightful, and although it was completely remade from the bottom up, it still managed to maintain what made the original so good. One of the issues, however, was the persistent nature of Mr X/Tyrant, and that by the end he became more of a burden than the continuous threat he was meant to be. Resident Evil 3 was known for Nemesis – a biologically engineered monstrosity – and one of the challenges Capcom faced with remaking it was making sure he didn’t become as irritating as Mr X, being able to provide a threat throughout.

It may not be have been as iconic or as memorable as RE2, but Capcom has done a superb job of making sure you don’t forget it this time around. Resident Evil 3 is a rollercoaster of intensity, and the inclusion of Nemesis couldn’t be any better. You will see him a lot in the seven hour campaign, but his inclusion always manages to keep you on your toes, never feeling unnecessary or forced. Right from the start, his presence is terrifying, taking every opportunity to scare you to death as he bursts through walls or appears from nowhere. A lot of your encounters come in the form of cut-scenes, but there will be a handful of occasions where you’ll have to step up to the plate and face him.

As your journey through Raccoon City gathers pace, Nemesis continues to mutate. He’s a very different creature in the beginning than the one you face in the end, and with his changes come new ways to take him out. He also has different weapons and attacks as he becomes more hideous, so there’s always a new version to understand and escape. Of course, there’re different enemies throughout, but Nemesis is the one you’re going to struggle the most with. He is a constant, he is dangerous, and his sole purpose is to eliminate you. Elsewhere, there are other Hunters that have different attack patterns and ways to take both Jill and Carlos out. In the hospital you’ll face Hunters with armoured skulls and deadly claws, and in the sewers you’ll have to destroy Hunters that resemble giant lizards with Demogorgon-like jaws. There’s bugs, failed Nemesis Program cast-offs, dogs, and the old faithful zombie. Resident Evil 3 wants to push you to the edge of survival, but at least it gives you a fighting chance.

Surviving the horrors can be difficult, and managing your inventory brings back memories of whether to hold onto that high-end item or drop it for a green herb. This is always a factor, and making the wrong decision can be costly. You’ll find a few pouches that’ll allow you to carry more, but with vital objects like keys, ID cards, and vaccines, knowing what to let go of can be a matter of life or death. Almost every typewriter (save point) is located next to a safe box, so you can store things in there, but when you’re faced with an immediate threat and you’re needing to substitute ammo for herbs, everything relies on that one important decision.

Resident Evil 3 supplies you with a decent selection of weapons, and each one has its perks against specific enemies. Ammo is sometimes thin on the ground, but finding gunpowder will allow you to craft it. You’ll also find ingredients to make various rounds for your grenade launcher, each having a different effect on who you fire it at. This weapon will be vital against Nemesis, and having fire, acid, and explosive rounds in abundance is a necessity, not to mention the mines you can fire from it. Jill Valentine is who you spend most of Resident Evil 3 playing as, and with each location being relatively claustrophobic, dodging will become a huge factor in your survival. Pressing the right shoulder button will make you dodge out of the way, and doing so at the exact moment is important — especially against Nemesis. It takes a while to use this effectively, but it will be the difference between surviving or dying in those tight spots. Certain enemies need to be taken out differently, and if you’re not taking advantage of their weaker points you’ll end up wasting a lot of ammo.

The Hunter Betas move fast, and they’ll also dodge your bullets. If zombies aren’t taken out correctly you’ll sink bullets faster than you can find them. Learning what works best is part of the challenge, and when things go south, your talents with a gun will be pushed to the limit. Keeping your cool when aiming your handgun at a zombie’s head is tricky, so studying their movements is key. I struggled to take out a lot of them in the beginning because of how unpredictably they move, similar to the previous remake. Even as you progress, the aiming can be a problem just because of how intense things get. When you’re running out of ammo and wasting your bullets, it’s a royal pain in the backside.

In the instances you play as Carlos, zombies are much more frequent. Resident Evil 3 switches up the way you play, forcing you to be more reckless with your weaponry, but thanks to the machine gun he’s armed with, it becomes much more of a bloodbath and less about precise shooting. There’s still an element of skill involved, as ammo for your assault rifle does dwindle, especially when you’re roaming the wings of the hospital. Whilst he’s not as likable as Jill, he’s still a great character, even if his hairstyle is terrible. The level of detail in every corner of Raccoon City is remarkable. It looks much better than Resident Evil 2 , and that was a gorgeous looking game in itself. The way the fire illuminates the horror of the infested streets of Raccoon City, with neon signs still lighting the darkened corners of the boulevard. There are other breathtaking visuals on offer that we won’t spoil here, but the lighting, character animations, and realism of the cut-scenes do Resident Evil 3 a huge service, and the opening to the game includes an FMV sequence that sets up the game perfectly.

Nicole Tompkins does a fantastic job as the voice actor behind Jill Valentine, making you warm to her instantly. Obviously, the originals were tongue-in-cheek as far as the acting goes, but with the remakes, Capcom has made sure the calibre of acting provides a believable and emotive approached as opposed to hammy and forced. There’s also some fantastic audio cues and effects, from the groans of zombies to the pulsating boils and grotesque mutations, Resident Evil 3 provides a chilling and tense experience from start to finish.

Resident Evil 3 is fantastic. Nemesis never becomes frustrating, and that dread in the back of your mind never goes away as you’re always waiting for him to pop up again. It looks amazing, with every location packed with great definition and detail. Whilst it may only take around seven hours to complete (the original was similar), there’s still plenty of reasons to replay. The game is filled with collectibles that open up models and concept art you can check out in the main menu, and the shop lets you purchase weapons, outfits, and more to take with you the next time you play.

Inventory management can be a problem
Tricky aiming

Resident Evil 3 is a superb remake of the original, with Nemesis being the clear highlight. Although inventory management and aiming can be a problem, it's still a fantastic game.