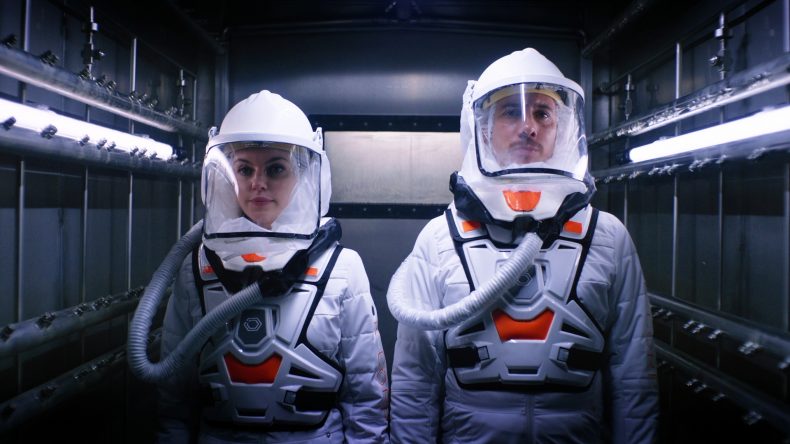 For some, games are a way to escape everyday life. A way to fall into some fantastical setting with some of the most amazing stories and characters. Now while The Complex might not be totally out of the realms of possibility, especially with current events as they are, it doesn’t make it any less of an immersive experience.

The Complex is a live-action, decision-based game, like previous games from Wales Interactive, and the decisions you need to make are difficult and morally grey. Even within the first 5 minutes of The Complex you need to decide who lives and dies between two characters. There’s no right or wrong choice, depending on which ending you’re aiming for, of course. There are 9 endings altogether, so The Complex has plenty of replayability going for it.

Without giving away too much, the story focuses on Amy Tenent, who we see treating victims of a chemical attack in the totalitarian state of Kindar. Fast forward 5 years and Amy is the lead scientist in the advancement of Nanocell Technology. Now, however, she is stuck in a locked-down lab after a person is transported to the facility after a suspected bio weapon attack.

It’s down to you to make.your way through the various options to uncover the tangled story and reach a conclusion, with each option having an effect on the outcome, as well the relationship status between Amy and the supporting cast. The cast has a fair few memorable faces such as Michelle Mylett (Letterkenny, Bad Blood), Kate Dickie (Game of Thrones, The Witch) and Al Weaver (Grantchester). The story is also written by Lynn Renee Maxcy, one of the Emmy-award winning writing team that worked on The Handmaid’s Tale.

There are a few additions to The Complex that Wales Interactive have added compared to their previous live action games. For example there is a real-time relationship status tracker. This shows how the supporting characters feel about Amy based on the various decisions made. If you’re looking for a challenge there’s an achievement for finishing a run with everyone’s like rating, for lack of a better term, being over 50%, which is not easy.

One particular feature I did enjoy was the Pause Choice option. This means that rather than have a few seconds to decide what course of action you want to take, there won’t be a time bar and you can take as long you please. The aim of this is for improved audience participation during live streams. However, if you’re of an indecisive nature this choice will give you that bit of extra time to weigh up your options. There is also the Skip Scene option in case you want to speed through and find as many endings as possible. Be careful though: if you skip scenes too quickly the highlighted choice will be chosen as your answer. There is also a personality assessment for Amy at the end of each run showing what kind of person you are based on the decisions for that playthrough.

The Complex isn’t that long, all-in. If you watch all the scenes in their entirety, and make decisions before the time bar runs out, you’re looking at about an hour and half per playthrough. On subsequent playthroughs, with skipping scenes already seen, this is massively reduced and you could potentially get to a new ending in as little as twenty to thirty minutes.

There is very little to complain about in The Complex. The story is very well written and the endings are really hard to call. The differences aren’t slight either, which is a good selling point. The only thing that did irk me, and this may be down to my own impatience, is the delay between scenes when picking an option. I understand that there needs to be a delay to give people time to decide which route they’re going. However, when I make a quick decision and need to wait a good few seconds before the story continues, which I know isn’t a lot, it can feel a bit disjointed. As I say that could be a more personal issue as it’s not anything game breaking or anything close to that. Apart from that The Complex is possibly the best live-action decision making game I’ve played.

Even if you’ve never played something like this and are looking for something a little different this is definitely one to start with. Having all those multiple endings will get you playing in an attempt to unlock them all as each decision, while seeming trivial, can have a big impact on the end result.

Slight delay in action after a choice can ruin immersion

The story and acting are superb and with so many endings it’s almost impossible to predict how each decision will play out and affect the overall conclusion. A must play for fans of live-action games.