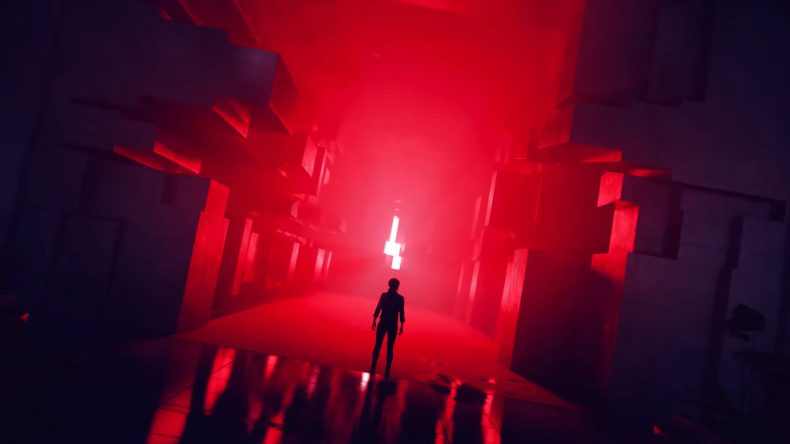 Quite ironically, Control‘s protagonist Jesse Fadan must feel a little like a janitor at the start of The Foundation. Having just risked life and limb to save the Oldest House from the grip of the Hiss, and before she even has a chance to settle into her new role as Director of the FBC – or even change her clothes – shit hits the fan again.

Deep in the foundation of the Oldest House something has stirred, causing an Astral Bleed that threatens the Bureau and the world beyond. As realities converge, the Board sends Jesse down into the bowels of the earth to find four keys that will suture the Bleeding.

The Foundation continues straight from the end of Control, and so you’ll head into the six or seven hour story with all the powers, abilities, and weapons you already unlocked. To compensate for this sense of over-empowerment, Remedy have thrown in a handful of new enemies who can teleport, throw axes, levitate, and move incredibly fast. In order to reach the four keys, you’ll need to manipulate strange crystal growths to either create paths or clear them. Jesse recieves two new abilities to facilitate this: one allows her to pull platforms out of walls or summon huge spikes of crystal from the ground to form cover or impale the Hiss, while the other imbues the Service Weapon with the ability to destroy these crystals instead. You can choose which to take first, and the choice dictates the order in which you’ll tackle the various areas.

While much of The Foundation looks the same as the main campaign, the hub area, known as the Crossroads, is a subterranean maze of red stone walls cluttered with rocks and debris. Stalactites tremble and plummet as Jesse exercises her powers, and grotesque geysers spout toxic gas from the ground. Tunnels stretch on into the distance, their destination clouded by smoke that dances with spectral light, and the central cavern is home to a huge monolith called the Nail. However, you’ll still navigate a lot of grey office space, too. It’s a shame Remedy didn’t go a little further afield with the environments, and anyone playing through the whole campaign before sliding immediately into The Foundation might experience a bit of fatigue at some of the visuals outside the Crossroads. That being said, some elements have been tweaked for the better. The map, for example, which was glitchy and near-useless at launch, has been improved, while Remedy have worked to stabilise the frame rate. I can’t testify on how those improvements affect the console versions, but on PC it all runs much smoother than I remember.

Part of the reason The Foundation works as well as it does is Jesse herself. I had my issues with her going into Control, which were allayed throughout the campaign until at last I was fully on board with who she’d become. In The Foundation, Jesse retains all that new surety and self-belief. Nothing shocks her or scares her anymore; she has fully accepted that the Oldest House is capable of more than she can imagine. With the Astral Bleeding threatening the Board directly, Jesse finds herself in the stronger position. The Board needs her, quite desperately, and as she delves into the history of the Oldest House it becomes clear that without her direct intervention, the Board is doomed and they know it. The story isn’t much of a departure from Control’s campaign though, in terms of the narrative, and much of the minutiae is still hidden in audio files and folders scattered about the place.

Besides the main story, there are a couple of new side missions and Objects of Power to cleanse. The Jukebox in particular offers a novel way to earn rewards for combat that’s both unexpected and challenging. It’s not on the same level as the Ashtray room in the main campaign, but rather offers a new approach to solving an old problem that I won’t spoil here.

So ultimately, The Foundation is more of the same, but in the best ways. What was wrong with main campaign is mostly still there, though. We still don’t fully understand what the FBC or the Oldest House are, but that’s okay now, because if Remedy have shown us anything with this DLC it’s that they are capable of building this universe brick by brick, and that they have a plan for where it’s ultimately going. Technically not much has changed, either, despite the tweaks, and Jesse still feels a little slidey when running and jumping, but her new powers and abilities integrate ao well with the main game that you’ll barely stop to think about how anything really looks. The Foundation is a great slice of DLC, and if Remedy can maintain this level of quality for whatever comes next, I’m in it for the long haul.

Great story
New powers are a great addition
Jesse is a stronger character now
The map is fixed!

Doesn't improve on a lot
Very similar to the main campaign

Ultimately, The Foundation is more of the same, but in the best ways, and if Remedy can maintain this level of quality I'm in for whatever comes next