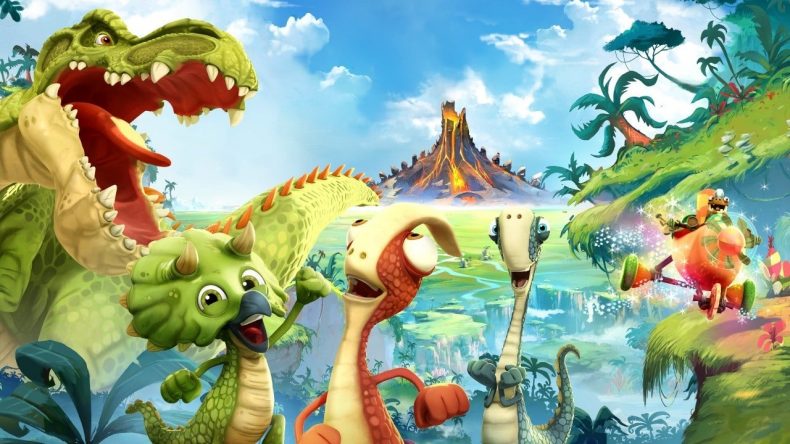 By and large, outside the realms owns and operated exclusively by Nintendo there aren’t a great many games designed entirely with young children in mind. Ostensibly titles like Minecraft and Roblox are kids’ games, but I’d hardly either of them entirely safe for either your unsupervised offspring or your bank account, and so it’s nice to see something come along that really does cater to the very young.

For instance, my daughter is 6 years old and within about 3 and a half minutes she was hooked on Gigantosaurus: The Game, the bright, colourful adventure from Wildsphere and Outright Games.

Based on Disney Junior’s Gigantosaurus TV show, the game follows main foursome Bill, Mazu, Rocky and Tiny as they navigate their super safe world and solve problems like returning missing dino eggs to their nests, and thwarting the plans of a pair of bungling but antagonistic Velociraptors. A meteor has fallen from the sky in the most kid-friendly way imaginable and has blocked up the nearby volcano, which just happens to be the domain of the titular Gigantosaurus, who has now descended from his mountain and is generally wrecking stuff on account of being utterly huge and terrifying for a living.

Each of your characters has a talent that comes in handy, like Tiny the Triceratops bashing down trees to form bridges. The worlds are beautifully drawn and surprisingly busy, filled with collectible gems and peppered with springboards, spiral slides, zip lines, and cartoony flora and fauna.

While I can’t honestly put my hand on my heart and say I enjoyed it, Gigantosaurus: The Game is not made for me, and my daughter absolutely loved it. The controls are easy, even without a pad, as it’s a simple case of using WASD inputs with the spacebar to jump and a spinning attack tied to R. It took her a few minutes to get used to it, but once I switched to the pad she was away. The levels are a mix of open area exploration and mini games, while occasionally you’ll take to the race track and charge around in a fairly rudimentary version of Mario Kart. At the forefront of it all is teamwork, as you switch between your four protagonists to complete various objectives, or can have up to three other people join in and solve the mysteries in co-op mode.

Gigantosaurus: The Game is incredibly cute, immediately likable and super friendly for your younger children. There’s no storefront to accidentally wander into, no random chat options that allow strangers to talk to them, and an onus on fun and adventure, teaching your children to work together and be persistent to solve problems.

The full launch is pencilled in for the end of March, at which point I’d certainly recommend this to families with young children. A version on a more accessible platform like the Switch would arguably be more popular, but as its stands Gigantosaurus: The Game is still an ideal way to let your very young children get in on the gaming goodness with the rest of the family.