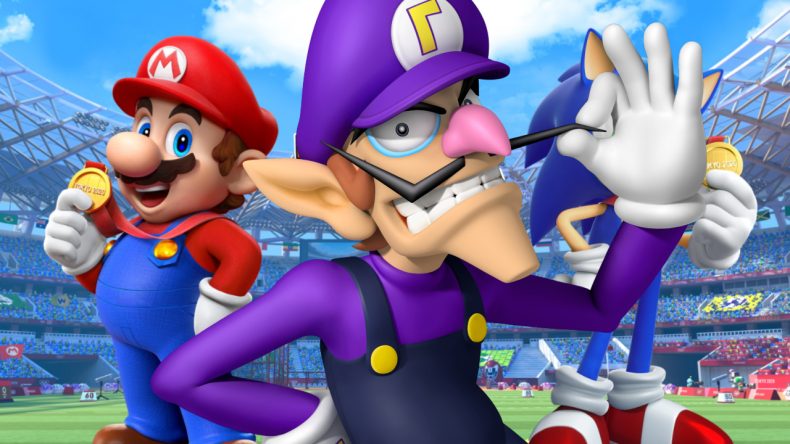 There’s a lot of events to choose from in Mario & Sonic at the Olympic Games Tokyo 2020. And as with any collection of minigames, some are better than others. After trying all of them, we’ve come up with our list of the top 5 events. Not only have we considered which events are the most fun to play, but also the all-important W Factor. That’s right, Waluigi, because if you’re not picking him then there’s something wrong with you. Sure other characters might have better perks, but no one else rocks a pair of skimpy shorts quite like the big W. So here are our top 5 best events in Mario & Sonic at the Olympic Games Tokyo 2020 featuring Waluigi. It’s an obvious pick for a reason. The same reason it’s the highlight of the Olympic schedule itself. The 100m is the epitome of fast, furious sporting action. One split-second mistake can cost you the entire race, and precision can be the difference between a medal or finishing last. It’s the event that most closely recreates the button-mashing titles we loved when we were younger. And what’s more, you can’t deny that using a JoyCon controller looks incredibly dodgy when thrust up and down as quickly as possible. But Waluigi doesn’t mind, any excuse to put those long legs of his to good use is fine by him. And his Super Dash move is him swimming in mid-air, pure class. The Javelin event is one of those events that nails the gyro controls when using a JoyCon. You get a bit of the running motion at the start, and then you hold your JoyCon aloft like a makeshift javelin. Then when you align your angle and launch with a downward thrust you feel just like Steve Backley. Nailing each part is key to getting a score that will top the leaderboards. The purple demon brings his A-game here, with his long limbs perfectly suited to both running and throwing. Just a cursory glance at his well-sculpted moustache is all the evidence you need to know he’s a pro at angles and keeping things nice and straight. The good thing about Gymnastics is that it’s essentially a series of quick time events. Your score accumulates, and whilst a low scoring round can hamper your progression up the leaderboard, there’s often another opportunity to turn your performance around if you nail the next round. You’re never quite down and out until the end, which adds to the pressure especially in local multiplayer. Watching Waluigi bust his shapes over the floor mat is a thing of beauty. Seeing him go from the perfect splits landing to balancing a handstand is strangely alluring. It makes you wonder what else the purple-capped machine is capable of when he puts his mind to it… Tony Hawk it isn’t but this still has the pull for those longing for some boarding action. The key here is to not only view the How to Play tips but take a gander at the Advanced controls. When you do you realise there’s more opportunity to link tricks together with Manuals, cheeky Kick Flips and even landing bonuses. It adds a raft of extra options besides the normal quarter-pipe jumping and grinding. Shredding expert Waluigi knows this and likes nothing more than stringing together insane combos. And he’ll let you know with a flurry of his signature sneers and jeers as he lights up the skatepark with his moves. It’s not an Olympic event at all, but its inclusion in the roster is a very welcome one. Take your gun and shoot down as many targets as possible, either solo or as part of a team. Accuracy in target destruction rewards points, and the highest score wins. But you’ll have to be quick as once a target has been shot, it’s gone forever. Waluigi actively encourages shooting other players as doing this enough will stun them for a brief time. Also for sneaky extra points position yourself in the centre of the arena when the kites appear for maximum points. Expect nothing less from the sneak-master himself.

So there are our top 5 events for Mario & Sonic at the Olympic Games Tokyo 2020. Lets us know your favourites in the comments, as well as your favourite Waluigi moments, which let’s face it, is all of them. Mmm, Waluigi, he’s a brilliant man. What a guy, so good. Waaaaaaa…

Features, Opinion
mario and sonic at the Olympic games 2020nintendoSegaWaluigi