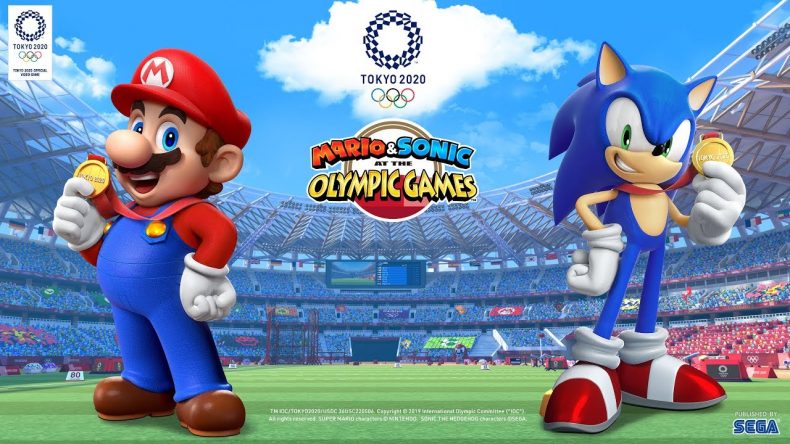 My first button-bashing Olympic game was Daley Thompson’s Decathlon on the ZX Spectrum. Sadly, yes, that’s me showing my age. It had all the elements you would expect: old-school graphics and fast paced events, and no matter who won, the results were always the same; arguments, blisters, and a knackered keyboard. Nintendo and SEGA seem keen for me to relive this again. By including retro-style events in Mario & Sonic at the Olympic Games Tokyo 2020 they’re tapping into my childhood memories. But does it work? The short answer is yes, but perhaps not the way they intended.

The main premise of the Mario & Sonic games remains unaltered: you compete in Olympic events with popular Mario & Sonic characters. Different events require different inputs and controls to succeed. Mastering these is key if you want to step out atop the podium. But what defines this game is the new and different content that it brings. The obvious addition is those retro events, and they’re an homage to the 1964 Tokyo Olympics. But these aren’t just stylized versions of current events. Most are new sports to try, so you can embrace the nostalgia and a new experience all at once. There’s Diving, Vault and even a Marathon event to have a go at. Mario and Sonic are in the 8 and 16-bit glory as a nod to the past too. It certainly takes you back, right down to the retro music accompaniments and the booming voice of the overbearing commentator. However, these retro events aren’t simply tacked on. They actually serve an integral part of the game’s single-player Story Mode. Here, Dr. Eggman has created a new retro games console, designed to trap Mario and Sonic inside. The plan works, but he, Bowser and Toad also inadvertently get sucked into the game too. The game is Tokyo 64, placing the characters in a retro gaming past set at the 1964 Tokyo Olympics. Whilst they compete in events to try and secure their freedom, Luigi tries to find help at the 2020 Games. You can expect more than a familiar face or two to pop up and help or hinder him along the way.

Yes, the story is bonkers, and it’s mainly a linear narrative peppered with excuses to compete in Olympic events. But there’s more at play here. In both timelines, you have an overworld map of downtown Tokyo, and move around to different events. Arenas litter the map, and famous Tokyo tourist attractions as well. Here you can explore, and chat with familiar Mario and Sonic friends who have come to spectate. They’ll drop useful tidbits about the Tokyo Olympics and generate a buzz of excitement for the events. It made me want to compete and, dare I say it, made me excited for next summer’s Olympics too. As you play you unlock new single-player minigames and new characters for specific events. It’s a decent introduction to most events and at 6-7 hours in length, it’s quite meaty and satisfying to plough through. The bread and butter though, are the events themselves, and there are plenty to choose from this time around. When you add on the Tokyo 64 events, there’s over 30 to enjoy. There are also 20 characters to choose from, not counting those unlockable extras. The characters have unique perks like speed or power in certain events, so choosing them is more tactical than just wanting to see Luigi in a leotard. The events are a mixed bag, in terms of their length, complexity, execution, and fun. The Tokyo 64 events start off relatively charming, but after a few goes each, they wear pretty thin. The inflexible controls, the sluggish pace, and the atmosphere feel flat. However, they do a superb job of highlighting where the vast majority of the Tokyo 2020 events get it right.

Most of the 2020 events will offer up to three different control methods; two JoyCons, a single Joycon, or just button inputs. The first two will also make use of the JoyCon’s gyro controls during events. Not only does this cater to different preferences, and more importantly how much space you have, but also offers a completely different feel to how events are executed. Shaking the JoyCon vigorously up and down to run, despite looking dodgy, gives the same rush as those button mashers from yesteryear. Similarly holding the JoyCon at your shoulder in the Javelin event feels satisfying as you mimic your athlete on screen. It’s the closest you’ll get to being an Olympian in your own living room. It’s not perfect, however, as certain control schemes in some events feel difficult to wield. The Discus event in particular frustrated me as I couldn’t seem to get the method right despite following instructions multiple times. There are also other niggles, like when you’re using single Joycons. Depending on which one you’re using, your shoulder button or analog stick is in a different position, making it awkward to use. Certain control decisions like not having Gyro aiming for Archery feels like a missed opportunity. But these are the only major control gripes. Most events have at least two or three control schemes that work just fine and are intuitive to use. You can call on tutorials at any point to remind you of how things work. What’s more, after completing events multiple times you unlock additional tips that will help you hone your craft.

The cream of the crop are the Dream Events. These are meatier encounters that perfectly compliment the often quick Olympic events. Dream Racing is like a downhill snowboarding race without the snow, whereas Dream Karate sees you trying to turn all the squares of a boxing ring to your colour by beating up your opponents. Dream Shooting is arguably the best and is a first-person shooter where you move around an arena shooting targets for points supremacy. Removed from the shackles of being Olympic events, these minigames flourish and focus on being pure entertainment. And despite not being official, their competitive nature still means their home in the game feels natural.

There’s plenty to enjoy here, especially if a few of you are gathered around the TV for some competition, but with a few caveats. For example, it’s odd you can only select single events at a time, rather than creating your own tournament. The repetition of having to go back to select events time and again does begin to grate. And given decathlons and the like exist, why can’t you create your own? You also have to select a single control scheme for everybody to use too. Having personalised controls would mean people could play how they want to, not just be forced to go with the majority. It’s still great fun and the banter and bragging rights are still there, but there’s a nagging feeling that things would be more enjoyable with these options included.

Like its package of events, Mario and Sonic at the Olympic Games Tokyo 2020 is a bit of a mixed bag. It’s a very nice game to look at, it’s well put together, has oodles of that Nintendo and SEGA charm, and, for the most part, it’s a lot of fun. You’ll have your event favourites, and conversely those you’ll want to avoid, often because of the daft controls. The inability to create your own tournaments is a big miss and dampens the local multiplayer experience. The Story Mode is a plus, and does a great job of showcasing the events and the 2020 Olympics itself. Sadly, it’s likely most people will have moved on long before next summer.

Tokyo 2020 is a decent entry in the Mario & Sonic series, with plenty of content and charm, but control inconsistency and lack of personalisation can mar the multiplayer fun.