previous
Celebrate the holidays with PvZ: Battle for Neighborville
random
next
Celebrating 25 years of PlayStation | The team's favourite games
0 comments 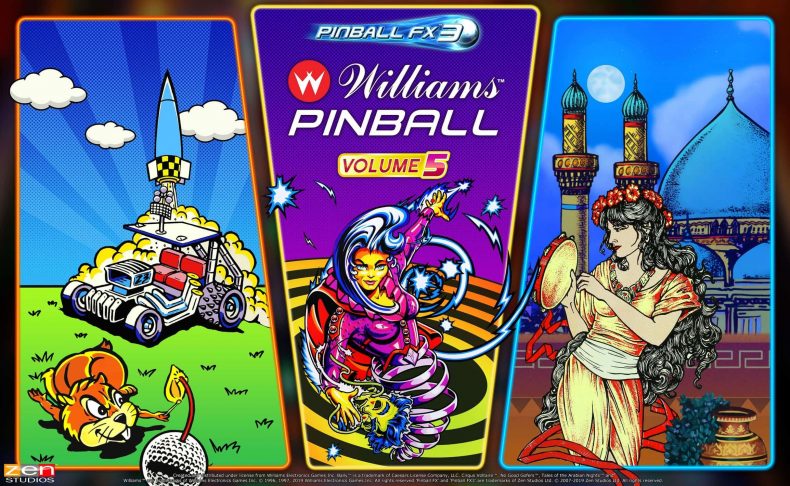 Zen Studios are treating fans to some legendary new tables in Pinball FX3. Williams Pinball: Volume 5 brings classic Williams and Bally tables for you to have a go at. The new tables, Tales of the Arabian Nights, Cirqus Voltaire and No Good Gofers, will arrive on PC, PS4, Switch and Xbox on December 10.

In Tales of the Arabian Nights you’ll be tasked with saving the Sultan’s only daughter, who has been imprisoned by an evil Genie. This table will feature things like flying carpets, caves of gold and a trapped genie waiting patiently in a golden lamp.

The Cirqus Voltaire has everything you’d expect in a circus themed table. Jugglers, acrobats, side shows and amazing vibrant colours await you. The Ringmaster is the villain in this table who aims to capture the ball and bring you one step closer to a game over. You’ll need to hit the oversixed ball in the Menagerie and fire the cannon for some Cirqus Luck.

Finally, in No Good Gofers, it’s player vs. gofer in a winner takes all game of golf. You’ll be up against  two Gofers, Buzz and Bud, as they attempt to ruin your game and stop you shooting all nine holes. You can take them out by working on your swing, or would that be flip?, and aiming the ball right at their wee gofer faces.

The tables will arrive as classic simulations and re-mastered versions. They can also be transformed into a more modern-day pinball tables with enhanced features.

Just less than a week to go with the new tables arriving on December 10. Best get some practice in. In the meantime you can check out the launch trailer jsut below.