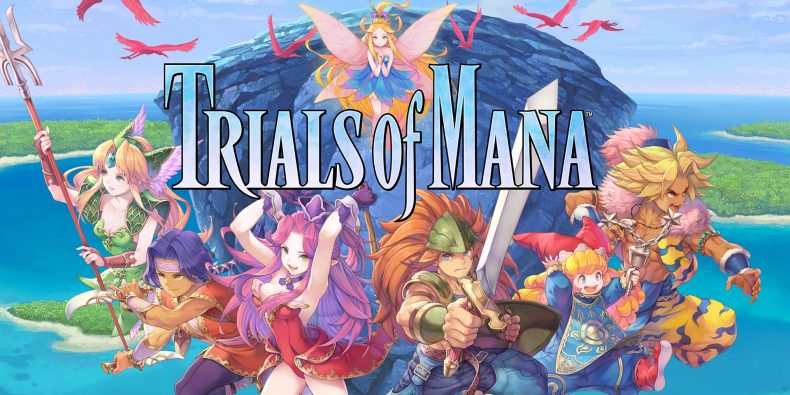 The Trials of Mana Demo is free to download for Switch, PS4, and Steam right now. It gives us an early glimpse into how the remake of Seiken Densetsu 3 is shaping up. The original game was the sequel to my personal favourite game ever made, Secret of Mana. As such, I’m more than a little curious as to how this remake turns out. I was burned with the Secret of Mana remake, and I hope that Trials of Mana doesn’t suffer the same fate. Having played through the two-odd hours of the remake’s demo, I already have plenty of confidence that this is looking in much better shape already.

I’ll openly admit to having not played the Trials of Mana original. It is sitting in my backlog, courtesy of the Collection of Mana release on Switch, but I haven’t yet made time to play through it. What that does mean is my adventure into the Trials of Mana demo was a blind one, which actually made the initial story set-up all the more interesting. Your journey starts with you choosing the main character and two companions from a roster of six. You’ll follow the story in its entirety from your main character’s perspective and can choose to play through the memories of other story beats from your companions too. You will likely meet the other characters on your journey but their stories will be kept to a minimum, only covering what the need to, to progress the narrative. It encourages not only mixing up future playthroughs to try different party combinations but also to reveal different parts of the story from different perspectives. Just starting the game filled me with anticipation. The opening cinematic uses similar tunes to Secret of Mana and I couldn’t help but smile. Heck, I’m the kind of nerd that gets excited because the load animation is the silhouette of a Rabite and a Mushboom! There’s a bit of story-setting at the start, unsurprising given there are actually six stories to tell in total. But before long you’re thrust into the action, which is a pleasant mix of exploration and real-time combat. The towns to explore feel as alive as their 2D counterparts, with plenty of people to have a chat with, as well as plenty of items littered about the place to collect. There’s a fairly intuitive mission marker system in place, identifying your next point of interest on the map, that will progress the story.

Out in the open field, you’ll find the game’s combat come alive. The camera, now in a more modern angle behind your character, does a pretty good job, and a solid 3D targeting mechanic always leaves you feeling reasonably in control. You have light and heavy attacks as well as a dodge and jump to use to your advantage. The combat feels reasonably responsive, and enemies have decent attack tells to counter against. There are also big red markers to identify more ranged attacks, helping you dodge accordingly. From this new camera perspective, sometimes the camera does get stuck behind tree foliage, obscuring your vision. However, it’s easily manipulated into a more convenient position, rarely impacting your battling. Aside from the familiar earworms from Secret of Mana that I recalled with embarrassing speed whenever they were used or hinted at, Trials of Mana feels like it has a decent soundtrack in its own right. I felt myself enjoying the tunes and melodies in the dungeons and towns I visited in between the combat. The voice acting is decent, not top-drawer, certainly – but competent enough to believe in the characters and situations that the demo laid the groundwork of.

Visually, it feels like Trials of Mana has opted for a sensible art style, with one that obviously feels like a marked step up from the 2D offering back in 1995, but with a level of colourful polish that gives it a more timeless edge. It feels more robust than the janky, sometimes overtly cartoon graphics of the Secret of Mana remake. It just looks competent and lovely, with some slick-looking menus and character models, animated well, even if it feels like their mouths don’t really open when they speak. The combat animations also feel smooth and purposeful. As a demo, the most important thing Trials of Mana has achieved is that I want more of it. And that’s not just because I’m a sucker for its predecessor. The story is interesting and showed off just enough to hook me in. The cliffhanger I was left on was a decent tease that had me longing for a lengthier experience. There’s depth to the mechanics, and the combat is engaging and smooth. It also is an audio and visual treat, especially for those with a fondness for the series.

But perhaps the biggest thing it succeeded in doing is making me feel like a fool. I feel like an utter idiot for leaving the original Trials of Mana untouched on my Switch for so long. Given the taste I now have for it, I can think of no better title to get stuck in whilst we wait a few weeks until the game’s full release. This demo is everything I wanted it to be, learning from the missteps of Secret of Mana’s flawed remake and building something that fans and newcomers alike will find very enjoyable.