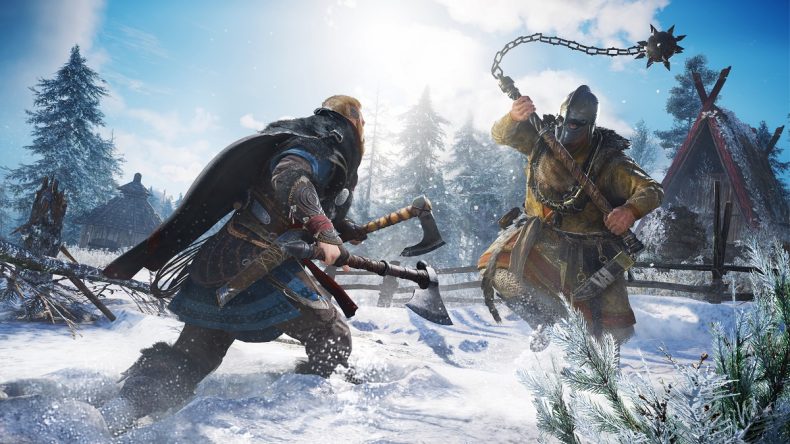 Ubisoft has announced the next instalment in the Assassin’s Creed franchise will be Assassin’s Creed Valhalla, releasing worldwide Holiday 2020. It’ll be available on Xbox Series X, PlayStation 5, Xbox One, PlayStation 4, Stadia, and PC, exclusively on both Epic Games Store and Ubisoft Store. The game will also be available on UPLAY+, Ubisoft’s subrscription service.

Assassin’s Creed Valhalla is being developed by the team behind two of the best games in the series, Ubisoft Montreal. The story follows a fierce Viking raider called Eivor, and follows her saga from a child raised on stories of battle and glory, to a a brave warrior. It will offer a captivating Viking experience, bringing players a dynamic and beautiful open world set against the backdrop of England’s Dark Ages. There’re host of new features, including raids, growing settlements, building their power, and expanding your influence.

“We can’t wait for players to experience the incredible Viking journey ahead of them,” said Ashraf Ismail, Creative Director of Assassin’s Creed Valhalla. “Being in Eivor’s boots as both a Viking raider and a clan leader, players will face the conflicts of establishing a new home while in the midst of a power struggle for control of England.”

Both a male and female version of Eivor will be available to play as, with customisation tools allowing players to change hair, tattoos, war paint, and gear. Choosing political alliances, combat decisions, and dialogue choices needs to be done carefully, as they can have an influence in the world of Assassin’s Creed Valhalla.

Driven from Norway by endless wars and dwindling resources in the ninth century AD, players will lead Eivor’s clan of Norsemen across the icy North Sea to the rich lands of England’s broken kingdoms. Players must carve out a new future for their clan, reliving the ruthless fighting style of Viking warriors with a revamped combat system that includes the ability to dual-wield weapons against a greater variety of enemies than ever before. To secure resources players can lead raids to select locations using their longship to earn much-needed riches and resources. As the Vikings begin to settle in their new home, they encounter resistance from the Saxons including King Aelfred of Wessex, who denounces them as heathens and looks to be the sole ruler of a civilized England. Against all odds, Eivor must do what is necessary to keep Valhalla within reach.

Along with the announcement of the game, the three Collector’s Editions were also announced, including exclusive Ubicollectables products.

Fans who pre-order Assassin’s Creed Valhalla will receive at an additional mission at launch,The Way of the Berserker, in which players will join a legendary Norse Berserker on his quest for revenge.

Video games are cool. Don't let anybody tell you any different.
MORE LIKE THIS
Assassin's CreedAssassins creed valhallaUbisoftUbisoft Montreal