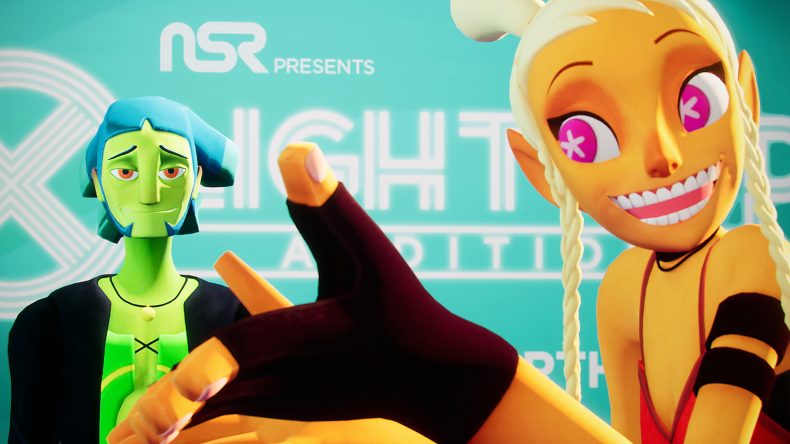 Rhythm action games can be great fun, right? But they don’t normally take the “action” part literally, unlike developer Metronomik. No Straight Roads is a game based entirely around music, but its gameplay focuses on the action side of things.

You play as Mayday and Zuke, together they form the band Bunk Bed Junction. They love rock, with Mayday on guitar and Zuke on drums, but there is one rather large problem: rock is dead in Vinyl City. NSR runs the city and Tatiana, the CEO, refuses to allow anything but EDM to play there. It’s best not to think about it too much.

Mayday and Zuke perform for Tatiana and her judges, rocking out against robots that attack on beat. It’s a great introduction to the combat mechanics, which are simple but begin to offer more depth as you progress into the game. You know, I would watch X-Factor if contestants were forced to battle robots while playing music. Far better entertainment than its current, trashy form. Needless to say, despite Bunk Bed Junction’s winning performance, the EDM-biased judges reject the band outright. This leads to the energetic and frustrated Mayday vowing to fight the corruption of the NSR and bring rock back to Vinyl City. Zuke is far more laid back, but agrees to tag along anyway.

One of the first things you will notice about No Straight Roads is its beautiful art style. Its characters are chunky and cartoony, full of colour and life, and Vinyl City looks like Blade Runner’s Los Angeles by way of Pixar. Neon and flashing lights fill the city, but NSR hogs the power and leaves poorer areas in the dark. Collecting batteries will allow you to fix this, bit by bit, as you explore the city’s districts.

The city is essentially a small, open world that expands as you defeat each member of the NSR. You run and jump around, collecting batteries and finding secrets such as stickers, that provide temporary buffs once you apply them in the workshop. The workshop is in the band’s secret underground base (the sewers) and reminded me of the base-building portion of the recent XCOM games. The view switches to a sort of cross-section of the sewer system, split into different rooms, each with their own specific uses. There are rooms for mission briefings, upgrades and more. This is where the combat depth starts to become more apparent, as there are slots to add new moves for each character, plus new special team-up moves for the pair. There’s potential for tonnes of new abilities, though it may prove tiresome having to go back to the sewers every time you learn a new move or want to apply a new sticker. Pretty sure you don’t need a workshop to put a sticker on a guitar.

Perhaps I’m nitpicking, because once you get into the game proper, it’s really quite entertaining. Mayday’s excitement leads to misjudged insults and declarations, usually resulting in me cracking a smile. Zuke often seems exasperated by Mayday’s unending energy, which is something to which I think we can all relate, in some way or another. The boss encounters are sprinkled with quality writing too, with amusing one-liners and clever ideas peppered throughout each battle.

No Straight Roads feels like a boss-rush adventure, interspersed with moments of light platforming. The battles with the musical stars of the NSR are long, multi-staged affairs that are bombastic and set to pulse-pounding songs that really get you going. I genuinely began nodding along to the beats of each fight, enjoying the energetic music that flowed perfectly with the on-screen action.

That said, these battles aren’t easy. Sometimes it’s because I didn’t feel like I entirely grasped the gameplay mechanics, but sometimes it was simply because I couldn’t see what was going on. In one fight, with its underwater theme and eye-melting colour changes, the camera kept pulling back and that meant my characters were difficult to see, even before smaller enemies and attacks obscured my view. Considering the fight itself demanded some pretty handy reflexes and coordination, it made for an unpleasant difficulty spike. Hopefully this kind of thing can be addressed before release, otherwise I doubt I’d return to it.

This doesn’t mean that No Straight Roads isn’t a good game. It’s quite the opposite, in fact. Its unique brand of musical action is something I would like to experience upon its full release, but not if it means sacrificing my vision and sanity to make it to the end. When it does click though, the action and music flow together beautifully, creating a strange blend of Devil May Cry and Jet Set Radio. Developer Metronomik is potentially onto a winner with No Straight Roads and if it wasn’t already on your radar, maybe it should be.

Interview with David Bateson, voice of Hitman’s Agent 47
Support us