previous
5 Ways A Press Release Distribution Service Can Benefit Your Business
random
next
Ubisoft Forward: Everything you need to know
0 comments 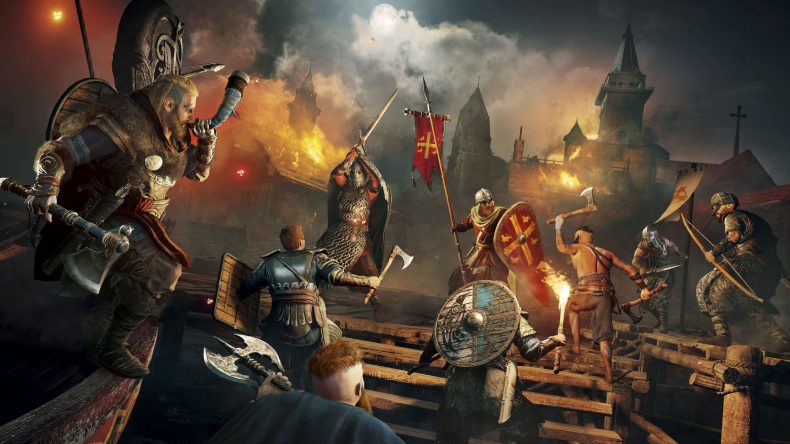 The Viking era may not have lasted long by history’s standards, but from the moment they attacked Lindisfarne in 793 BC, the Northmen became a troubling presence in Europe. “Immense whirlwinds, flashes of lightning, and fiery dragons were seen in the air,” as they attacked the very heart of Christianity, sending shockwaves throughout Britain and its neighbouring countries. The Vikings are often misconceived as savages who thrived on barbaric raids and their own bloodlust, but in actual fact they were so much more than that.

They were experts in navigating the sea, inventing various compasses that aided them when journeying across the Atlantic Ocean, as well as being talented ship builders and farmers. The Vikings aren’t given nearly enough credit for their advances in technology, be it in their nautical accomplishments or efficiency in innovative weaponry. They wanted to better themselves and build new settlements to allow them to thrive, which is something that should be more acknowledged than it is.

I am fascinated by the Vikings, and ever since Assassin’s Creed has been in existence, I’ve craved a chance to finally see them tackle this era in history. Ubisoft has delved deep into the history and lore of this glorious period, and after playing around three hours of their new game, it’s everything I wanted it to be. I love the AC franchise, be it the escapades of Edward Kenway, Bayek, or Ezio Auditore. Ubisoft manage to blend a rich historic backdrop with their own twist on events, as well as providing vastly satisfying gameplay. All of my time with Valhalla was spent in East Anglia. Dense grasslands, farmhouses, and towns such as Northwic were where I spent most of my time, and although much of the land was barren (as it would’ve been), there was still much to explore and see. Unlike the sun kissed cities seen in Odyssey and Origins, Valhalla is grubby and dank. It’s remarkable how realistic it felt, and after a few chance encounters with bears and Anglo-Saxons, I was in loving it. The rivers were a huge part of getting around, and using your longboat to manoeuvre the twists and turns of the waters also added to the realism. Whilst Viking Gokstads were renowned for carrying tons of cargo and gliding across unruly oceans with ease, they were also fine stealthy vessels in the mainland. You can call your longboat by pressing down on the D-pad, and once on board it’s easy to control.

Raids and Assaults are a huge part of Assassin’s Creed Valhalla, and the main mission I played has me take part in both. Whilst you can raid various enemy camps and churches on your own, it’s so much better when you have your clan with you. Eivor is part of the Raven Clan (a nod to the Allfather Odin), and when entering a destination in which you can raid, you blow your horn and then descend upon your unsuspecting enemies. Combat is much more methodical. I was using a Battle Axe and shield, and loved the brutality of chopping through the various soldiers I faced. You can block incoming attacks with your shield, dodge out of the way, and use a selection of various special moves to dispatch single or multiple foes. By holding in the right trigger button, it brings up four moves which are outside of your standard light and heavy attacks. One saw me ‘poison’ my axe whilst another had me throw smaller axes at a variety of enemies. Your bow is also part of your arsenal, and holding in the left trigger allowed me to perform another four attacks with it. Inside the first raid on a church, there were plenty of chests to loot, and the aim is to find as much of it as you can. By collecting this loot, it builds up your Wealth in that area. Wealth, Mysteries, and Secrets can be found across entire areas of the map, and by finding them all will mean you’ve ‘completed’ that area. It seems as though there’s a lot to find, and like most AC games, you’ll have plenty to do outside the main story.

The best thing by far about Assassin’s Creed Valhalla was the Assault I took part in. Storming across the waters in my longship, I travelled towards Burgh Castle. As I got close, the soldiers within the castle reigned down fiery arrows upon me, and by using my shield I was able to block them. As my clan rowed, the arrows kept coming, and we had to keep protecting ourselves so we wouldn’t be dead before we even reached land. Once we arrived at the gates of the castle, it reminded me of Middle-Earth: Shadow of War. What followed was a hard fought battle against the men of a rival viking. Breaching the castle meant breaking through the gates of three different areas. Men kept coming at me on the ground, with archers firing at me from above. At every gate, our Raven Clan used a battering ram to breach the defences, but those enemies protecting these gates poured drums of hot oil upon us. They also used ballistas against us, and it was down to me to use my bow to take out those controlling them. By the time we reached the final area, I had to find Rued, the viking enemy, and defeat him. It was so intense. Enemies kept spawning and I kept fighting them. Once I found a way to climb the walls and escape the constant wave of enemies and arrows, I found Rued and fought him. He was accompanied by a wolf, and the battle was tough. I was so impressed by how this Assault was structured. From arriving at Burgh Castle and breaching its defences to using parkour to scale the castle’s walls, it felt like a huge accomplishment. These set pieces look set to be a big part of Valhalla, and I can’t wait to take part in more of them.

After defeating Rued, I got to take part in a wedding celebration. The man getting married was Oswald, the new King of East Anglia, was the man I rescued at Burgh Castle, and it was a welcomed detachment from the chaos and brutality of the war I had just taken part in. I took part in a drinking contest with fellow clan member Broder, or how he liked to be known, the “Ale Beast of East Anglia.” There was an arrow-firing challenge set down by his brother, Brothir. Of course, it was disturbed by Rued, but I defeated him in a one-on-one battle, even after consuming large amounts of ale.

To improve Eivor’s abilities, you have different Node Types in an intricate skill tree, varying from Stat Nodes that improve your base fighting, and Main Skills which provide new passive moves. There’re three different paths (Wolf, Bear, and Raven), and as you unlock new skills and powers, it improves your Global Power. Essentially, this increases your overall level and builds Eivor to become a fierce warrior. Throughout the course of Assassin’s Creed Valhalla, it looks as though you’ll unlock plenty of useful abilities as you overcome the forces of the Anglo-Saxons.

Assassin’s Creed Valhalla is shaping up nicely. Combat feels much deeper, with a great sense of authenticity whilst fighting with an axe and shield. Raids are a satisfying part of the story, and the Assaults are amazing in showcasing historical accuracy for how the greatest warriors of all time fought. Eivor is an interesting character, and although I played the majority of it as a female, both were likeable protagonists. I’m genuinely excited to play more of Valhalla, and with only seeing a small fraction of the game, I can only imagine how good the full release will be.

Video games are cool. Don't let anybody tell you any different.
MORE LIKE THIS
Assassin's CreedAssassins creed valhallaUbisoftvikings