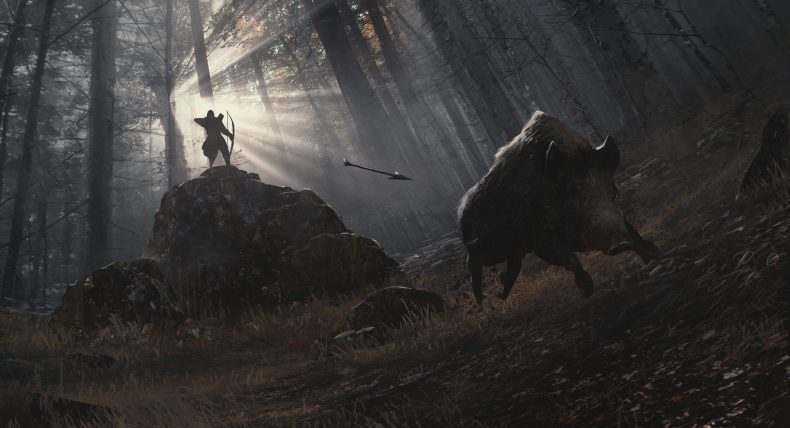 It’s clear that Toplitz Productions like the term “dynasty”. We had Farmer’s Dynasty, and then earlier this year Lumberjack’s Dynasty. And whilst it’s clear what they’re going for with these life-sim titles, the choice of wording felt a little exaggerated. However, for their brand-new title, Medieval Dynasty, which we’ve had a first look at, it finally feels like the wording is justified. The underlying principles of building up from scratch and expanding your heritage is still all there. But this time, the scale feels larger and much more purposeful than ever before.

Medieval Dynasty is a melange of four different genres, with RPG elements of levelling up your character mixed in with some building strategy as you construct buildings and complete tasks for various NPC villagers. It also throws in Survival aspects as you need to keep your player alive which also plays out as Life Sim as your character ages and builds their legacy for others to follow in your footsteps after you do eventually and inevitably die.

You start off with nothing, just a few measly items in your inventory and your wits, as you begin to establish a new life in a local village. You must forage your surroundings for resources which can then be used to craft tools to help in more sophisticated crafting. Your priority will be an axe to lay waste to the local trees, and a hammer to help start building. And you will need to build, not least a house to spend your days in. So far, this likely sounds incredibly familiar, especially if such survival titles are your bag. And yes, from what we’ve seen of how the game plays so far, it does seem very intuitive, certainly to start with. But there appears to be plenty of ideas thrown into the mix, to both create variety in your experience, as well as additional considerations during the normal day-to-day expansion of your ever-growing legacy. On a personal level, you’ll need to manage a health bar, stamina levels, as well as hunger and thirst too. A superhuman builder, you are not, and these need to be managed alongside your various projects and quests. You can also get poisoned if you eat dodgy food, and you even have a smell rating as well. Do too much hard work, and you’ll begin to pong. NPCs will be less likely to engage with a smelly builder, so you’ll also need to keep yourself fresh!

There’s a level of detail here as well that will likely keep players hooked. Whilst the terrain of your surroundings appears fixed, what is contained within it is more random. Roaming creatures and resources are randomly generated meaning upon starting the game afresh you’ll genuinely have to hunt for the stone and wood you need to get started. There’s additional touches like tool durability to worry about, as well as garnering different amounts of resource from larger deposits. Larger trees for example will provide more wood, but take more swings of your axe which will wear it out quicker. So, everything you do is a purposeful choice. There are different layers to the survival part of the game too. There’s a day and night cycle to navigate, which has a significant impact on your visibility, and also ability to complete certain tasks. Hunting, for example, is better done in the day, and you begin by laying traps for small game, in the hope of finding a full trap the next morning. Foraging for food is also much simpler when you can see what fruit you’re trying to pick. There’s also a temperature gauge to consider as well, with different clothing giving your different protection from the cold. It means you’ll need different garments for the warm summer months, and to change to more substantial clothes in winter. Think of how temperature works in Breath of the Wild and you won’t be far wrong.

But outside of simply surviving, what else is there to do in Medieval Dynasty? Well, as mentioned, the longevity comes by expanding your empire and influence to greater things. You’ll complete quests to build your renown amongst villagers. Over time this will allow you to recruit some of them to complete work for you on your behalf. They might become fisherman, hunters or miners looking to make the most of a nearby mountain packed full of resources. It lightens the load of expansion considerably, making a grand expansion seem possible. Doing work yourself though is still beneficial as you’ll level up skills as you become more proficient for various boons and bonuses as you play.

And to cap off the experience, there’s a very real reason why survival and expansion is important. Your life in this game is finite. If after the passage of time, you haven’t found a wife and borne an heir, and you die from old age, then your dynasty is over. But don’t worry, it takes a good while in the game for old age to creep in, about 40 hours, and maybe much more depending on how you play. After about half this time, if you’ve fulfilled the (ahem) criteria, your son will grow and you’ll be able to train him and bring him with you on quests to increase their skills. There’s even thought gone into skills that you pass onto your heir, and how they learn too.

It all feels rather grand in scale, certainly befitting that dynasty moniker. And from this First Look, it’s clear that Medieval Dynasty isn’t lacking in ambition. We’ve seen plenty to suggest there will be a lot to sink your teeth into. It’s still in the early stages, and it remains to be seen if there is truly enough variety to keep you hooked for the tens, and even hundreds of hours the game might have in store for you. But we won’t have to wait too long to truly find out. The game is due for an Early Access release at either the end of Q3 or early Q4. And it’s certainly one we’ll be keeping an eye on over the next few months.