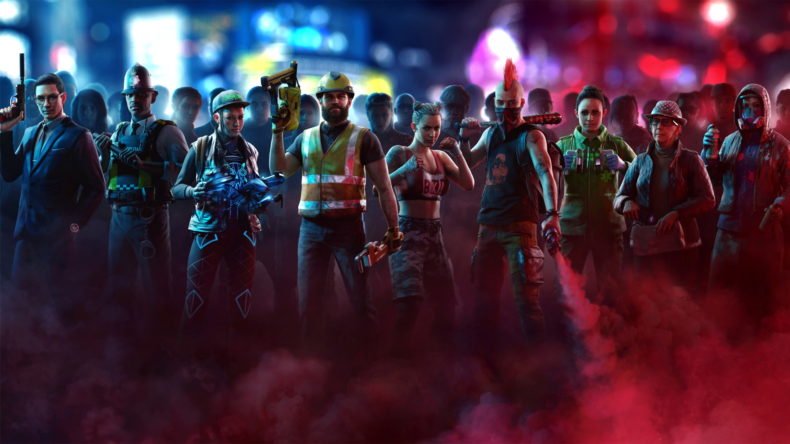 Watch Dogs Legion is not the game you think it is, but based on my four hours with the game so far it definitely is a very good game. But I’d rather get the elephant in the room discussed sooner rather than later, so here it is: Watch Dogs Legion doesn’t seem like a funny game. There are characters that quip, though it’s mostly an Avengers-like Jarvis-style AI that does the quipping, but Legion is a dark game so far, which is really not what I was expecting.

There’s a danger it tries too hard, too. I’ve not played many games with as much swearing in as Watch Dogs Legion, almost to the point of parody. There’s a side quest here involving bare-knuckle boxing where the crowd is almost exclusively shouting “fucking hell” or “fuck off” or some randomly cobbled together phrases that should be funny, but again, are a bit try hard. There’s some incredibly inventive swearing, I won’t deny that, but even the commentator for the online stream of the fights is giving it leather, all the while I was being tag-teamed by the champions, battering me to a bloody pulp. 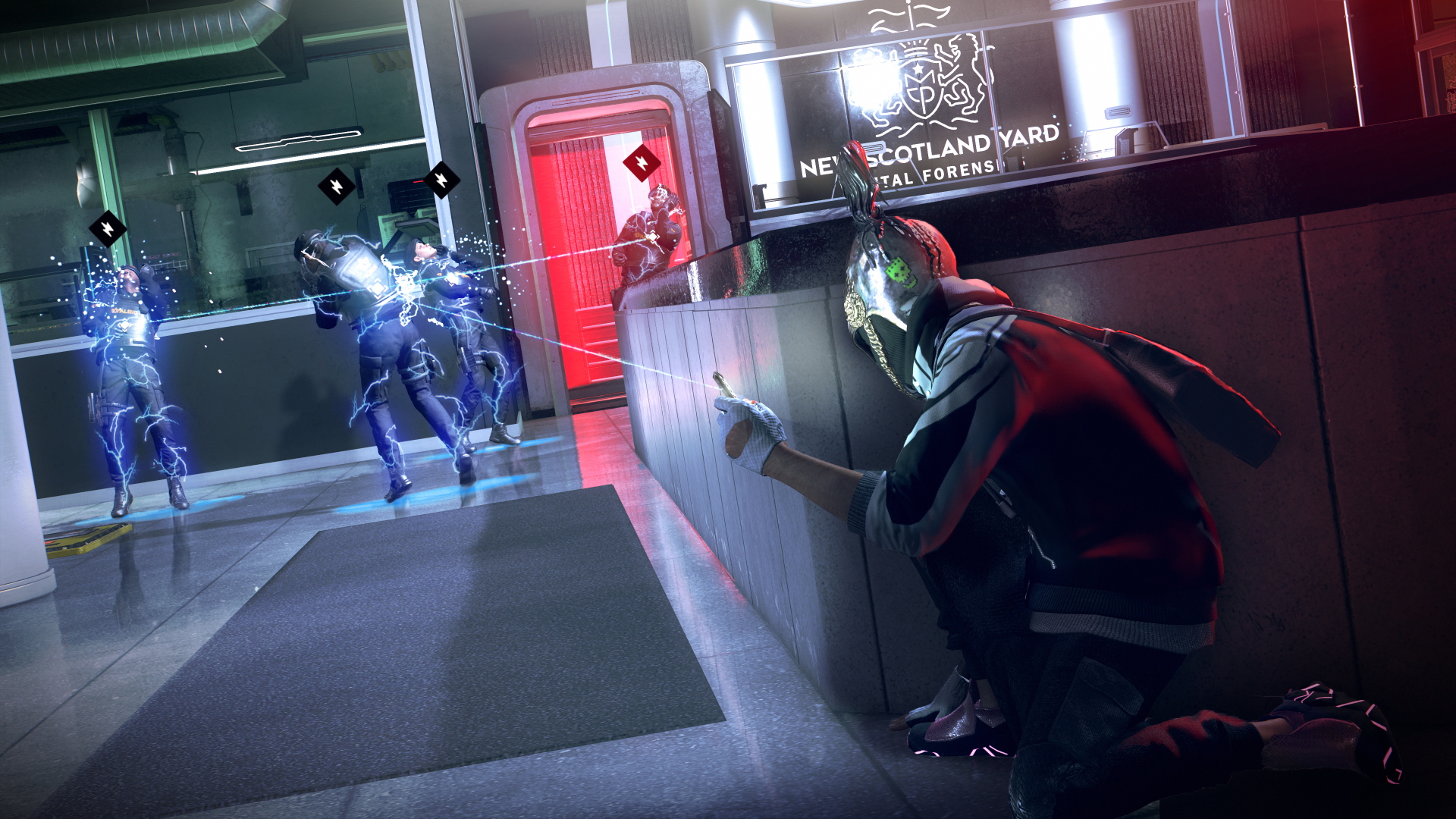 Setting the scene, it’s clear that this is not London as we know it. It’s set in the near future where technology has rapidly accelerated, and after a tragic set of events, London is under rule of multiple gangs that use drones and other tech to keep the population subdued. There are checkpoints set up on the roads that scan cars, there are plots involving injected substances that can be used to control people, it’s dystopian in a way that’s bordering on uncomfortable, though it is nice to see London bustling with life again, albeit a London where everyone seems to swear non-stop at anyone and everyone who passes one another.

And I’m aware that I sound down on this game, don’t I? And I don’t mean to because I absolutely loved what I played of it. It’s the gameplay of the phenomenal Watch Dogs 2, iterated upon, but the tone is nearer that of the first Watch Dogs, which will please some, and annoy others, especially given the marketing which suggests a far more jolly game than I played. Perhaps that stuff is later on in the story, because I didn’t find photographing the faces of corpses particularly hilarious, and I didn’t find a sweary granny to recruit to my gang.

But goodness, randomly making cars in traffic swerve into one another or off the road at the touch of a button is still remarkably fun. Quickly hacking drones or people’s phones and watching the chaos that ensues is tremendously satisfying, and it all works as well as it did before, and is no less fun in Legion. Using a Spider bot to infiltrate a building is great, too, scuttling around the vents and ramming your, what I can only presume to be, spider-penis into the electronics to shut down security systems is a lark. 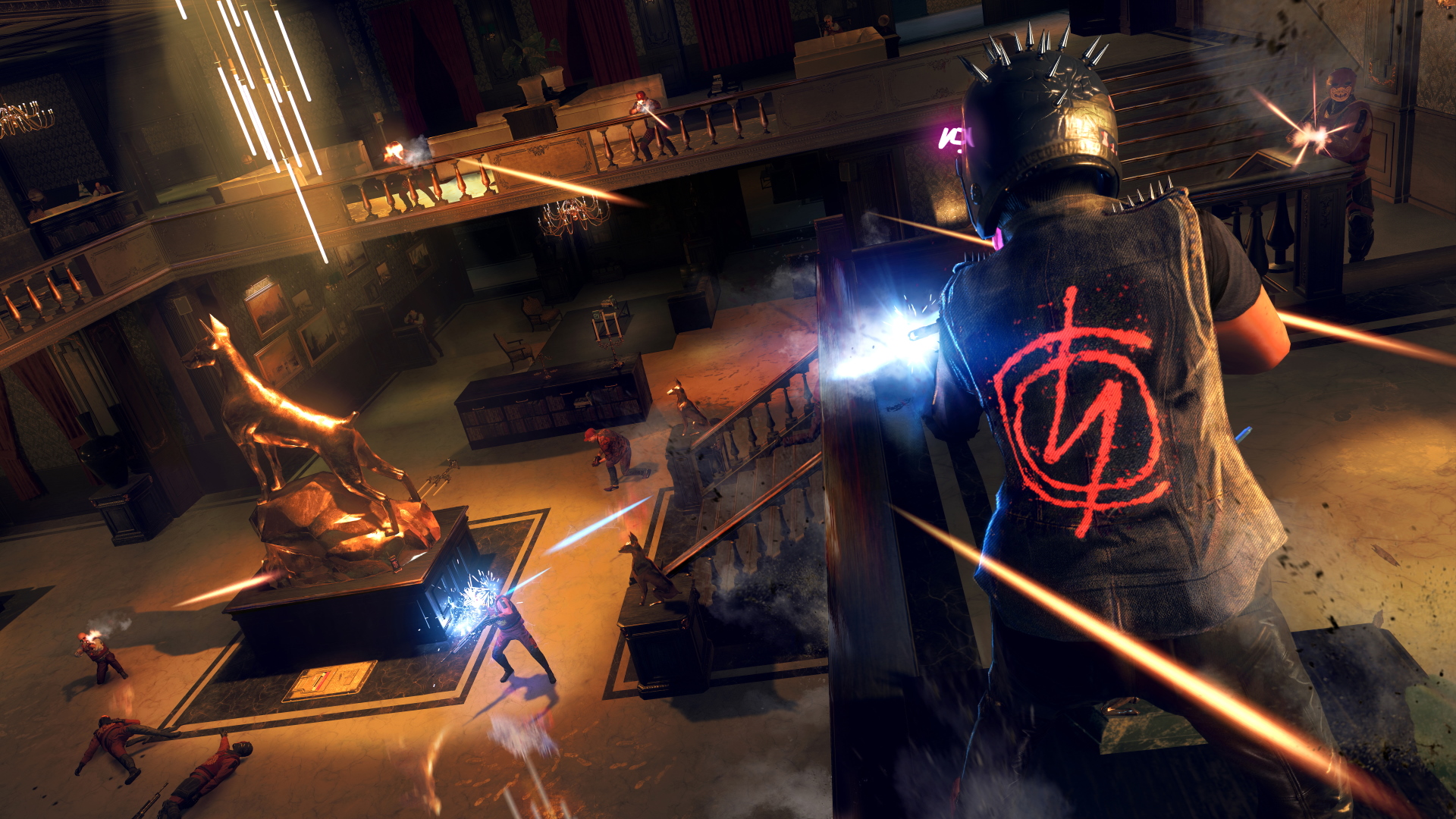 It all works really well, too. One building I managed to use the quick scan, batman-like detective vision ping to identify security cameras easily. Then, bouncing instantly from camera to camera, set multiple traps, draw enemies in and actually take out all but three of the guards without ever entering the building properly. It’s just a case of mopping up the dregs then, and hitting your objective, then leaving cleanly. It’s great; it really is. How you choose to tackle a scenario is pretty much up to you. Sure, there are rules of the game, and you can’t break out of the boundaries as such, but that’s where Watch Dogs Legion’s main point of interest comes in: you can recruit anyone.

People were rightly skeptical of this at first, but it really does work as promised. There are a few different ways of recruiting people, and one does just involve talking to someone and recruiting them, but they need to be sympathetic to your cause for this route to work. Others require little missions to be completed, and these missions are more detailed that I would have expected. Multi-stage levels that you must complete will turn even the people who hate DecSec into allies, but everyone has a unique set of traits and uses.

From passive abilities like quicker skill cooldowns, to full on weapon loadouts changing, every character is voiced and it does seem as though every voice has been recorded for every possible story section. You can swap between your team at will (via a short load), and you can track recruits by the menus, pulling them into your team as and when you fancy it. Different team members will have different skills, as I say, but some are vital. 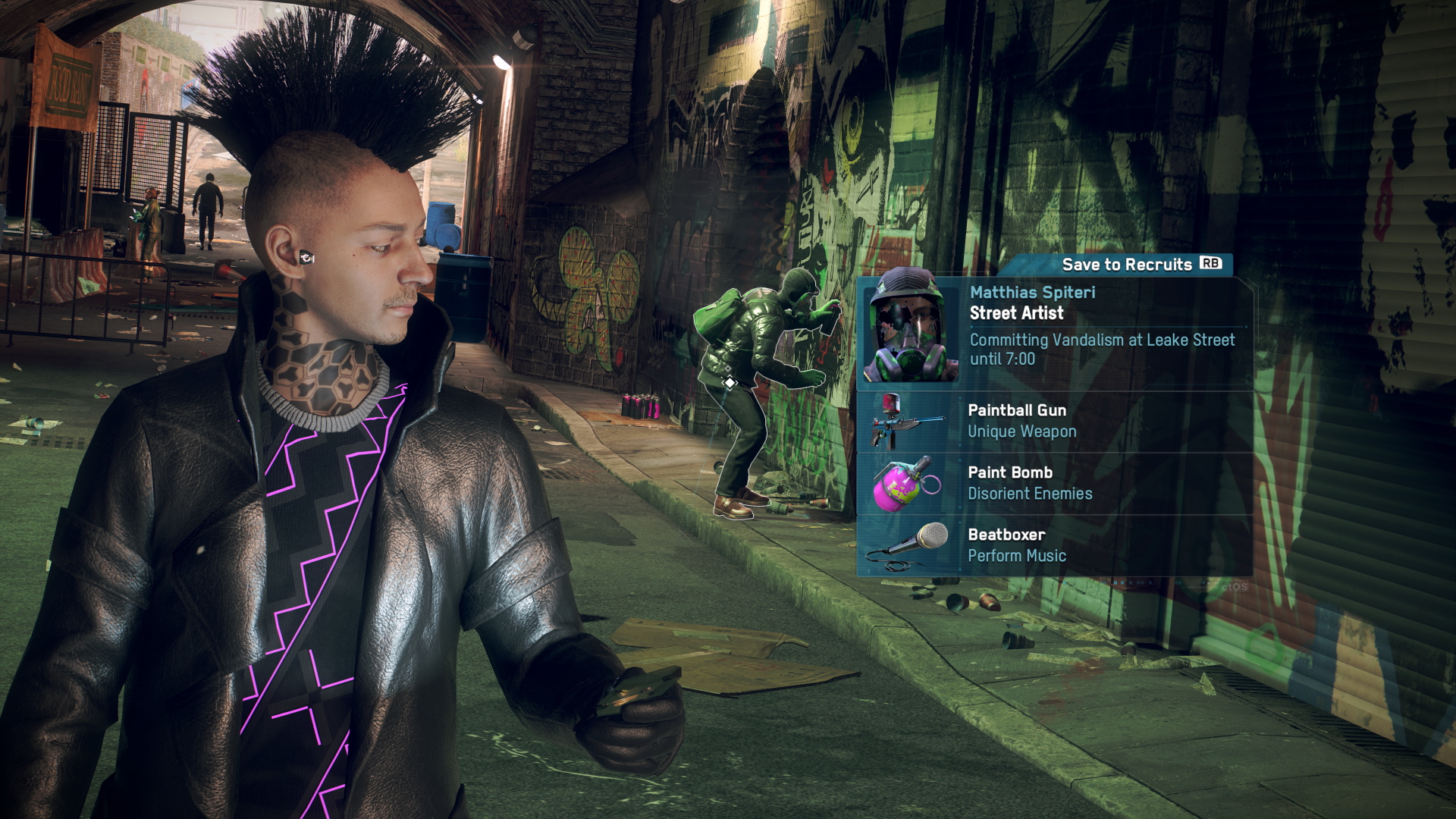 For example, a barrister means that if you fail a mission and are arrested as one character, your jail time will be reduced, or in plain English: you can play as them again sooner. It’s in your best interest to recruit loads of people, and there are skill upgrades, some which apply to your overall roster; some which need unlocking per character. Honestly, it’s remarkable and impressive, and the only issue I have with it is that some of the character accents are just so, so bad. Some seem to swing in and out of whatever accent they’re performing, and although London is wonderful for its multi-cultural population, some of the voices on offer here feel like caricatures, which is perhaps where the jokey-ness of the marketing comes in? It’s fine to have a swearing grandma, but there are sections of this otherwise very serious story that feel daft because of the delivery of the lines, and how inappropriate some of the dialogue feels in the moment.

Moving away from the story, there is definitely fun to be had. There were a few minigames I found that range from simply doing keepy-uppys with a football, to taking down gang-run areas to find collectibles, and of course the aforementioned boxing scene. I really did enjoy adding to my team, too, and you can scan everyone in this game, and some of the traits are wild. I’m pretty sure I saw some people I recognised in the game too, but I can’t say for sure right now.

Towards the end of my preview session I decided to see what I could do in the open-world, just ignoring all the rules and making it my own sandbox. I found a huge drone that I could ride, and took to the skies, flying (or is it drone-ing?) across a world famous city, seeing landmarks like big ben or the gherkin. I heard people being hassled by “the man” and I swooped slowly downward on my drone like some kind of crap Spider-Man, beat the bad dudes up, freed my fellow oppressed citizens and then flew away again, slowly, on my drone.

I droned across London Bridge (I think) and I repeatedly made trucks and buses change direction via hacking because I could. I jumped into the water and I made a rich bastard boat owner repeatedly reverse towards me so I could mount his boat and take it back for those of us less fortunate who don’t own boats, then I jumped over more bad guys using their boat as a ramp, then went man overboard, and swam ashore to hide like an even more crap Spider-Man, while the heat died down. I chuckled as I did all of this.

Watch Dogs Legion is a strange game, because you can ride a drone above multi-story buildings listening to an AI that quips as you fly, but there’s also human trafficking and a subplot about enslavement and black market organ selling. I have no doubt that Watch Dogs Legion will be one of the best games this year, and after spending four hours with it, I’m dying to play more, but I do hope the tone settles down further into the story, because while I found myself in a lovely rhythm with the hacking, almost Batman-like combat, decent gunplay, and good handling vehicles, I do worry that the story is a bit too serious for its own good. It seems like a very, very big game, though, so I can’t judge the story just yet. Regardless, I cannot wait to play more of Watch Dogs Legion, and it’s going to look brilliant on those next-gen consoles, too.

Watch Dogs Legion is out on Xbox One, PC, and PlayStation 4 on October 29th, 2020. It will also be a launch release for PS5 and Xbox Series X and S

Editor-in-Chief here at GodisaGeek, I organise almost every bit of content as well as running our weekly Podcast, and being the lead producer on our YouTube Channel. That means I'm very busy and sometimes grumpy. Yay!
MORE LIKE THIS
UbisoftWatch Dogswatch dogs: legion