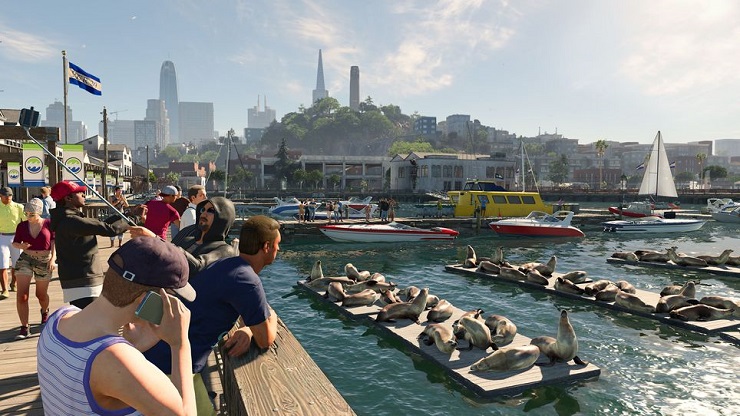 Watch Dogs 2 is finally out, and despite many gamers having reservations about it, it turns out it’s actually a lot of fun. Of course, there are those that’ll never like it or even give it the time of day, simply because they never liked the original and think it’s cool to not like what’s popular, but it’d be a shame for people to miss out on Watch Dogs 2 because it’s a big step away from the original.

I don’t make bold statements every day, nor do I ever regret them once the worlds have left my lips. The Beatles aren’t all that. Jack Daniels is a poor man’s Jim Beam. DC movies are more enjoyable than Marvel ones. I believe in what I say and I make the following statement with complete certainty: Watch Dogs 2 has the best open world ever. Better than Skyrim. Better than Grand Theft Auto V.

Sometimes, we’ll see something or do something that changes our opinion or forges a new one and we know that from that moment, we have a new benchmark. San Francisco has been crafted beautifully by Ubisoft Montreal and every inch of the city is so detailed and interesting. When I wrote the review, there were so many reasons I wanted to share with you as to why I believe this, but there just wasn’t enough time. Thankfully, I’ve got this opportunity to let you know some of the reasons why I wholeheartedly believe that Watch Dogs 2 has the best open world I’ve ever had the privilege of exploring. Every NPC has a story

No matter the person, whether they’re lying on the floor with beer all over their cardigan or jogging along Ocean Beach, you can find out what a person does as part of their everyday lives. Some belong to church groups, others go on paranormal outings and one dude was going urban spelunking whilst his boyfriend writes erotica. You can also find out what their job is and how much they earn, which is completely useless information for the sake of the story, but proof how much work has been put into making the civilians of San Francisco feel alive as much as the city itself.

On one warm night in San Francisco, I was taking a ride around the Embarcadero Centre looking for dumb shit to do. I hadn’t really made use of the emote wheel, so I decided to have a bit of fun. There was one guy playing guitar for money; he didn’t have much of an audience so I went over and started to dance. He bloody loved it. He played with more passion and loved the fact I was dancing to his songs. On the same night, I flirted with a couple of prostitutes, but they kind of laughed at me and walked off. I didn’t feel stupid or embarrassed at all, and I’m totally fine about the whole situation (honestly, now stop asking!).

You can also take photos in Watch Dogs 2. “Yeah, well you can do that in GTA V, cockend,” I hear you say. Yes, that’s true, but in WD2, they react to photobombs and either get happy or sad depending on the kind of privacy you’re interrupting. One girl was doing yoga on the beach; I was taking a picture of her dog and she came into shot. She stopped doing yoga, posed for a second then carried on doing the downward dog and whatnot. However, another couple were having a cuddle under the sunset, and when I took a photo of them they came over to me and started acting a little too aggressive for my liking. Either way, NPCs all act differently to you and it’s another way they feel more real than they do in say, GTA V.

Create your own stories

Something happened to me outside of a mission, and it came about completely organically. It’s probably my favourite video game anecdote I’ve ever told, and I’ve been waffling on about it every day since it happened. I was stood in a tattoo parlour/bar when I used the L1 button to scan a dude stood in bondage gear and an exploding firework sex toy thingy in his hand. It turned out he was a registered sex offender, and I wasn’t too comfortable knowing that.

With that information, I placed a bounty on his head with a local crime gang (yeah, you can totally do that in Watch Dogs 2), and after a couple of minutes a car turned up outside and started shooting at him. Somehow, he managed to get away and the car lost his tail; I followed the whole thing running alongside it, so when the gang disappeared, I pointed them once more in his direction. This time, they gunned him down and left him in a heap on the pavement (or sidewalk for authenticity). Someone called the police and they tried to arrest the main gang member.

I hacked into the police car and managed to put it in reverse, startling the cop and causing him to break away from the gang. As the two gang members got back in the car, the policeman turned back to try and arrest them before they sped away. Thankfully, I drove the car right into the cop and made sure the gang members got away. In that moment I was a vigilante. It felt wrong, liberating and right all at the same time, but it was incredible. Do bad shit and never get arrested

Thanks to the wonderful ability to hack pretty much anything, you can piss off people all over the place and they’ll never know it’s you. Civilians are oblivious, cops are oblivious and you are being a right shit without any consequence. You can be a good guy, though. Yeah, I love to burst pipes under roads so police cars and food vans will blow up, but who wouldn’t? Sometimes, however, I use my hacking for the greater good. There was a couple of guys harassing this girl in an alleyway. She clearly didn’t want to talk to them, and they kept bothering her. After a while, she managed to get away, but the bishops of banter were still goading her – still bothering her.

One of the guys was laughing, thinking the whole ordeal was a bit of a laugh – a bit of joke at her expense. I sent an electric charge to one of their phones and gave him one hell of a shock – quite literally. He fell to the floor, his mate shat himself thinking he’d be next, and I was stood on the other side of the road without anyone knowing what I did.

San Francisco is full of beauty

I’ve never seen this much detail in a city before, and it has just blown me away. From the beaches and the colour to the industrial buildings and the woodlands, Watch Dogs 2 is remarkable. If you’re stood by the harbours of San Fran, you can see the Golden Gate Bridge sitting on the skyline. Ever looked up to see a cloud trail of a recent plane that’s flown overhead? The attention to detail is on another level, and travelling from one location to the next is seamless. No loading times or occasional bugs ruining your exploration, nowhere is blocked off meaning you’re free to go wherever you want whenever you want.

Even inside buildings the detail flourishes; take the Google-inspired Nudle HQ. The colour, the corridors, the desks and the cafeteria all have specific details etched on, the grass outside and the pavements within the grounds are finely marked to look as realistic as possible too. This is just one building, and there are so many other buildings to walk around and explore. Never mind, at least you can still play other open world games. This is only an opinion after all, but for those that are intrigued at the possibilities that await you in Watch Dogs 2, there is no better time to play it. The story is silly fun and encumbered with delightfully dense missions and variety, but the real fun is in the time you spend exploring and investigating the locations and the people of San Francisco.

Video games are cool. Don't let anybody tell you any different.
MORE LIKE THIS
Grand Theft Auto VskyrimUbisoftwatch dogs 2