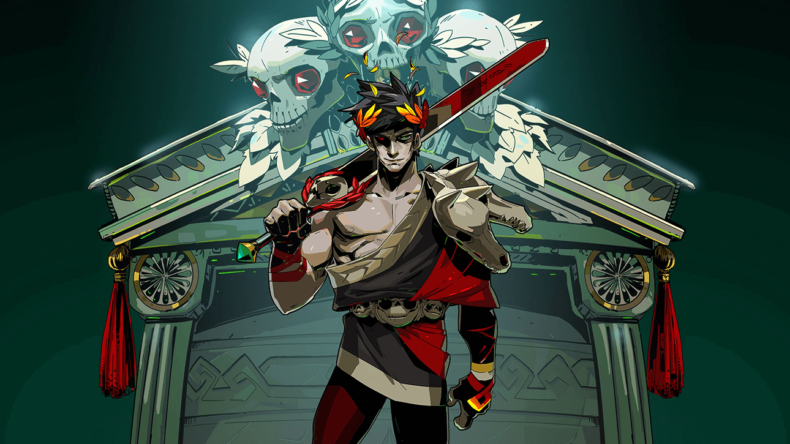 Stories tend to take a bit of a backseat in roguelike adventures. The focus is more on the movement, the combat, the sense of progression, and learning through failure. Yes, there’s normally a backstory of sorts, a purpose or reason for what’s going on on-screen, but rarely anything that compels or builds throughout. As you get further in your adventure runs, you might piece together more of the story or find out more details on certain characters, but it’s very passive and sometimes down to chance. It’s incredibly refreshing then when Hades not only puts its story front and centre of things but also has an incredibly clever and deep approach on how to embed its story into the very fabric of what makes a roguelike great.

You play as Zagreus, the son of Hades, looking to break from his paternal shackles and escape Hell, looking for a better life with the other Gods on Olympus. Fair enough, I suppose, Hell isn’t known for its nightlife – Afterparty aside that is. You’re dumped straight into the opening room of your first run through the ever-changing floors of Hell. Zagreus will fail spectacularly at first, of course, as is the nature of the difficulty of a true roguelike.

Supergiant Games’ choice to drop you straight into the action is the first of many key decisions that drive the narrative. Upon your inevitable first failure escaping Hell, you’re sent back to the House of Hades, and the first thing that strikes you is how, well, alive the place is. There are plenty of characters to go and speak to, mostly well-known figures from Greek mythology. Not being able to see this until you’ve played through to death once, helps to not detract from your ultimate aim of traversing the floors of Hell to escape. It places the story as secondary, but a close second to the traditional gameplay loop, and establishing this upfront cements the broad intention of Supergiant Games from the outset. 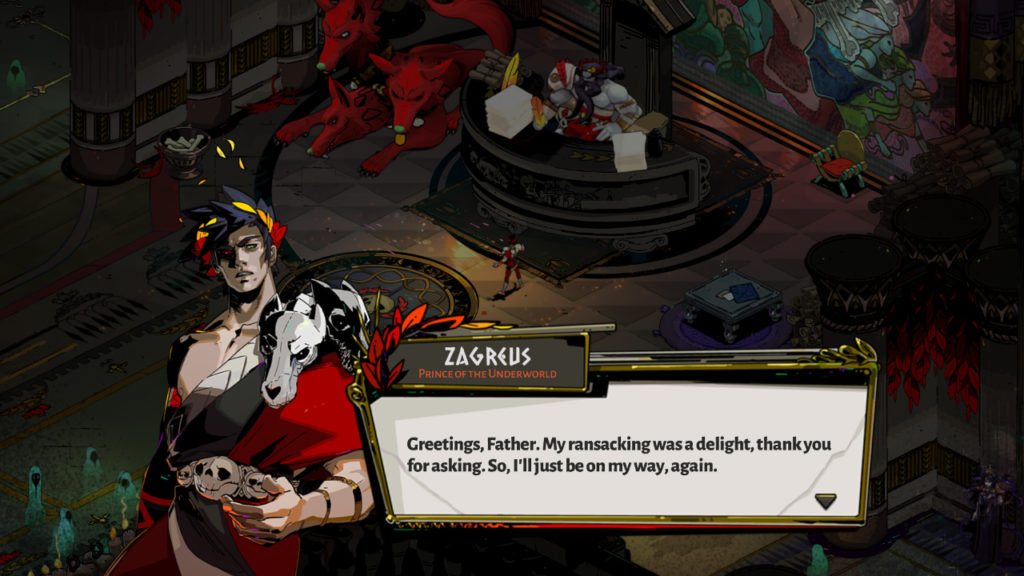 The main hub is filled with other characters to talk to, some clearly supporting your efforts to leave; others, like Hades himself, clearly less so. Interacting with these characters is recommended every time you re-enter the House after another failed attempt, because they’ll always have something new to say. And the beauty of these interactions is that they’re not just a random new line of dialogue. Often they’ll be lines relevant to what you’ve just experienced, a boss who just killed you, or a secret you uncovered. It makes the conversation feel reactive and shows the depth of the writing on show.

The characters themselves are also very diverse, from the mysterious Nyx, to the aloof Meg. Achilles will be keen to offer you encouragement in your endeavours whereas Dusa, a floating Gorgon head, is a maid with a bit of a fanboy crush on our hero. No two personalities are the same, and it makes the conversations between each one engaging in between another run to try and escape your father’s latest machinations.

There’s a wealth of other characters you’ll interact with too, but these will be during your time escaping. The Gods of Olympus offer support to Zagreus, as they welcome him to their Mount Olympus home once he succeeds in leaving Hades. They grant him boons that help, but also act similarly to other NPCs in their branching conversation trees based on past events. Gods will comment on previous interactions with other Gods, sometimes making derisory comments at their expense. And they all feel unique too, from the powerful Ares, to the caring Aphrodite. 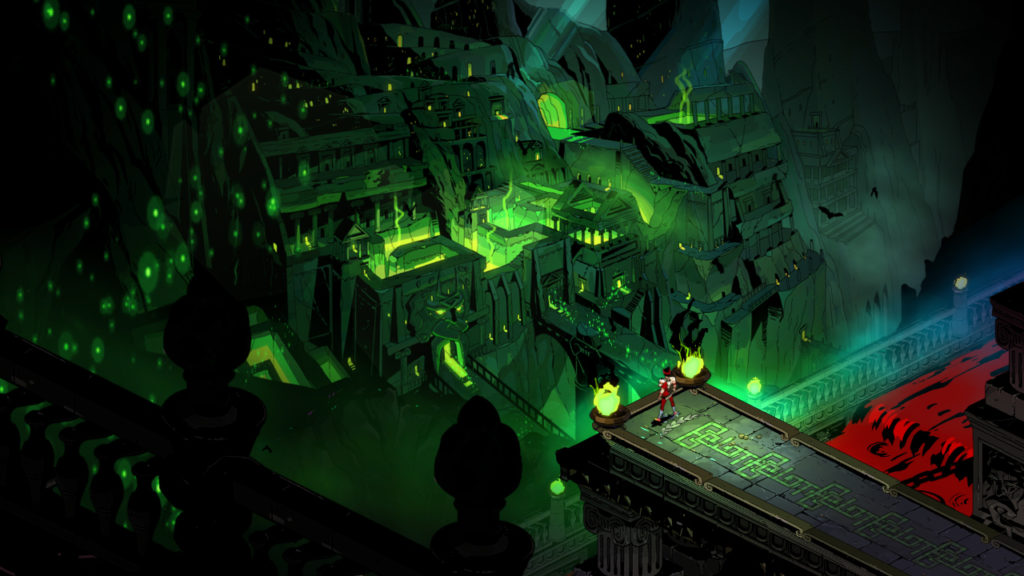 You can also progress and deepen relationships with all these characters, Gods or otherwise, through the use of in-game items you find. If you offer any character some Nectar, it will improve your relationship with them, and they will initially reward Zagreus with a Keepsake, which provides you with a bonus for future runs. Selecting which Keepsake to take on adventure can affect your playstyles, and is another example of how relationship building affects the roguelike adventure. You can even keep improving your relationships with characters by offering more Nectar, completing tasks, and eventually offering the rare Ambrosia. There are even romance options for Zagreus to pursue, should you find yourself that way inclined.

But the real treat in Zagreus’ backstory itself. After a few failed runs, and some more conversations with characters you begin to piece together more of the Zagreus’ motivations for wanting to leave Hell in the first place. You learn how Hades, his father, treats him, as well as begin to understand what happened to his mother, and what lead to her mysterious disappearance. There are even playable flashbacks to help deliver more of the background plot, and you understand that this is bigger than just a little tiff between father and son. Again, other characters are involved and their dialogue changes upon your new discoveries. It’s very intriguing, and well-paced in its delivery. 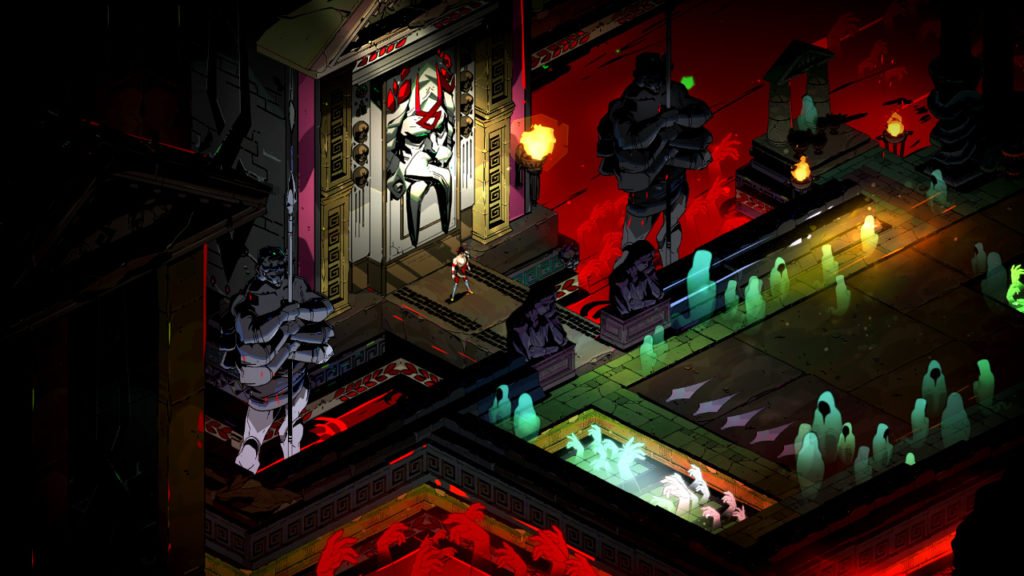 What it all means is you now have twice the reason for wanting to beat the game and escape Hell. Sure, you want to overcome the challenge of the roguelike in front of you, as do all fans of the genre. But now you want to because it’ll reveal more about what’s going on, and you’ll be helping Zagreus – a very likable character, by all accounts – discover more about his past and family. And then, masterfully, when you do finally achieve this feat, Supergiant Games decide to offer you even more of the story should you be successful more than once. They’re well aware that most people’s reaction upon beating a roguelike is still to jump straight back in again, and the story plays to that urge also.

Hades then has a story unlike any other roguelike really. It’s deep, jam-packed full of differing characters, with plenty of varied and reactive dialogue. But it’s the way it is interwoven into the nature of a roguelike that makes it special. Learning more each time you play is the hallmark of a good roguelike, and in Hades, as well as learning enemy patterns or boss movements, you’re learning more about characters, motives, backstories, and emotions. You’ll want to keep playing just to see where the story goes, how it all wraps up for our lovely protagonist. Hades’ storytelling is excellent, and to see it in a roguelike is refreshing, and to see it executed to such a standard makes it more than deserving of our GOTY 2020 Best New Idea award.