For more than a few years now, Age of Empires has seemed like one of the old masters. Sitting back, observing what the younger generations have done with the secrets it once taught. Since the last new Age of Empires game (AoE 3 in 2005), the genre it helped to mould has diversified pretty massively. This year saw the release of Humankind, for example, a game that felt in many ways like a progression for the civilisation sim as a whole. But which, importantly, still used many of the tropes pioneered by Ensemble’s title. With Age of Empires IV, the old master has emerged from retirement – but is it still the once and future king, or should it have stayed on bed rest?

That’s actually a difficult question to answer. On one hand, there’s a self-assuredness and, dare I say, swagger, to the way Age of Empires IV presents itself. This is a series that knows itself, and that’s clear from the get-go. But there’s also the sense that it knows the genre has moved on in certain areas, but it’s not willing to risk falling behind by trying to move ahead.

As a result, its hallowed return, while welcome, comes with almost zero innovation. In a genre that typically takes risks to stay current and fresh, Age of Empires IV feels almost ironically safe. Perhaps the biggest addition is the way it tells its stories. 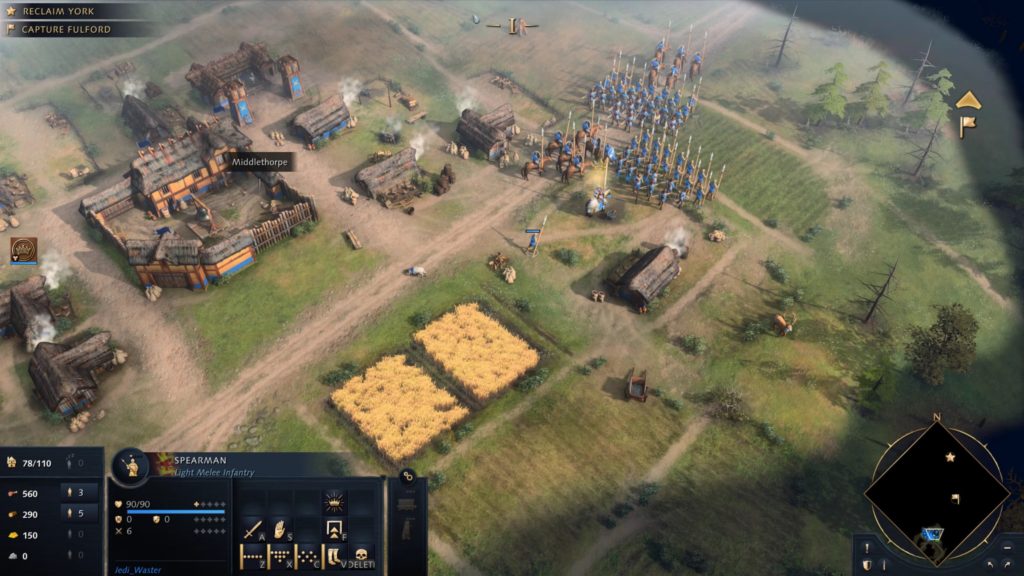 Age of Empires IV: Return of the King?

There are four narrative campaigns, each separated into 9 missions. The Norman Conquest of England, the Rise of Moscow, the Hundred Years’ War, and the Mongol Invasion. After completing the first two missions of the Norman Conquest, you’re free to jump into any of the other campaigns. They’re presented as histories, albeit with some pretty huge artistic liberties. Missions are interspersed with documentary-style cutscenes, skillfully narrated and with a mix of real video and animation.

If nothing else, the production values of these documentaries make them feel authentic and real. For anyone but history buffs I’d hesitate to call them “exciting”, exactly, but they’re well-made and informative. They set the scene well and feel visually different from the rest of the game without feeling out of place.

Once you’re in the campaigns themselves, though, it’s business as usual. Which, honestly, didn’t leave me feeling short-changed. Building up your fledgling economies is clearly explained and easy to get the hang of. Expansion of your towns and cities feels natural and organic, and it won’t take you long to get a handle on the basics of managing your resources. Gold, Wood, Food and Stone are the four cornerstones of each empire. The skill comes from identifying the best locations for each of your structures and maintaining the balance between societal progression and military might. 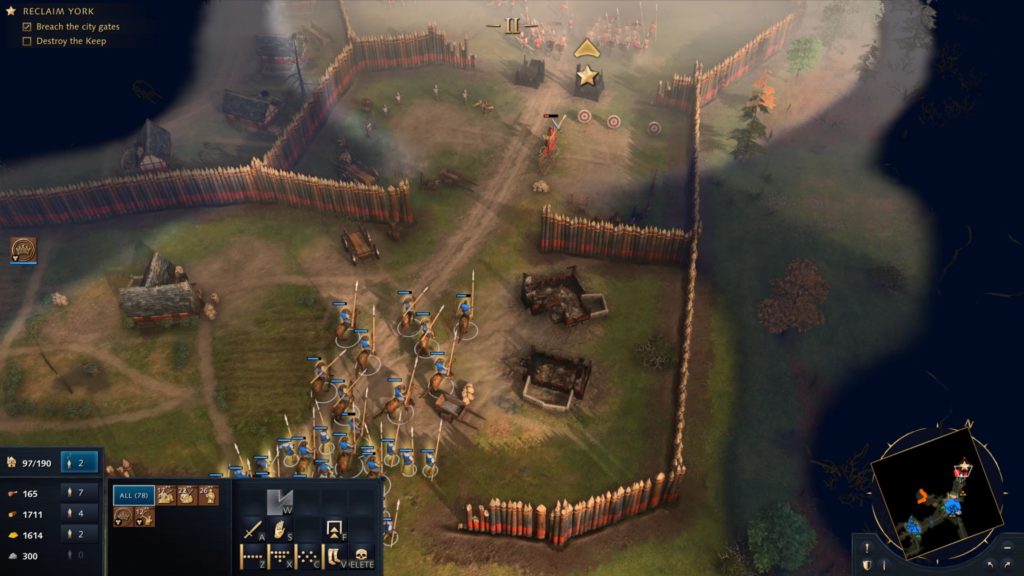 In the 17 Skirmish maps you can set certain seeds to determine how things will pan out, from combat difficulty and enemy density, to how aggressive your neighbours are and how abundant certain resources will be. In the campaigns these choices are mostly taken away, and you will begin the majority of missions with clear objectives and resources or vantage points you’ll need to secure as soon as possible.

Each of the four main civilisations (although there are eight in total) have different strengths and weaknesses. The Mongols, for example, aren’t great at resource-gathering but are built for war. They can train units quicker than the other factions, and their nomadic nature removes the cost of uprooting and moving buildings. The Russians in the Moscow campaign, on the other hand, barely have time to build huge armies, as you’re constantly forced to defend and adapt against the Mongols.

Narratively, the Moscow campaign may be the strongest, too. Something about it feels more compelling than, say, the Hundred Years’ War – but maybe only because I’ve seen the latter story told many times in many mediums. Either way, the narrative isn’t what we’re here for, and thankfully the gameplay is tremendous across all modes. 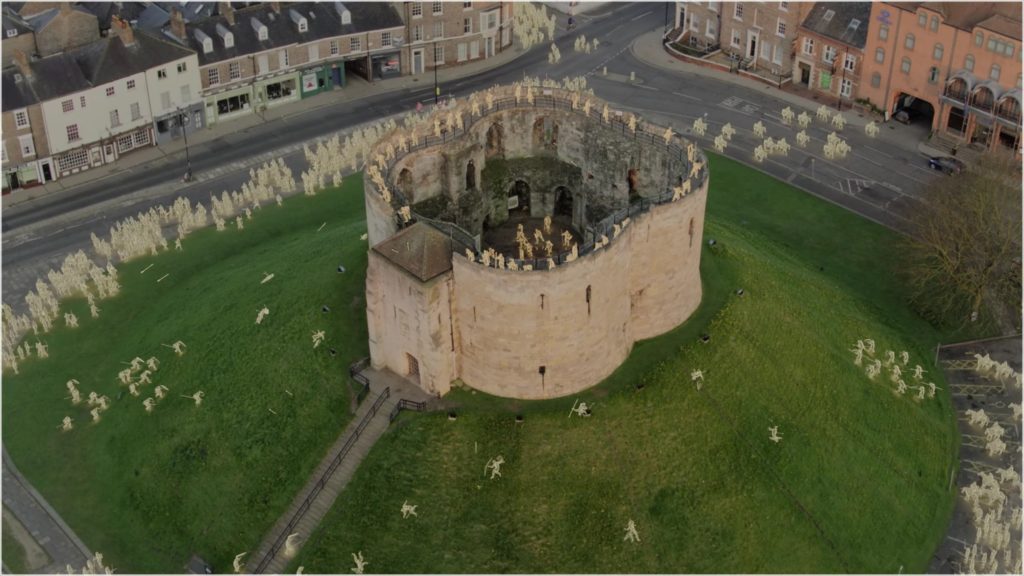 Have fun storming the castle!

It helps that Age of Empires IV looks so good, with heaps of detail in environments, buildings and units. As you progress each faction through four historical eras they will advance aesthetically, at the same time unlocking new buildings and units to construct and train. Resource management is straightforward, but there a some elements of unit control that could be less fiddly.

For example you can assign numerical groups to different unit types (Archers as 1, Cavalry as 2, etc), but it would be easier to just have a portrait somewhere to select specific units and quantities. Often martial success comes from unit placement and strategic thinking, and being able to jump between groups quicker would be helpful. Also, if your primary force is annihilated, it takes a long time to build up a second army. You can set rally points and such to make things simpler, but the option to either expend more resources to train faster or to have reinforcements move a little quicker during an active battle or siege would have been useful.

Speaking of which, large scale sieges are pretty fun, despite being massive resource drains. The system isn’t deep or strategic enough to lead to lengthy battles of attrition, but having to hammer away at an enemy fortress while hurrying to produce extra units and keep the resources flowing feels oddly exhilarating. The diplomacy and political elements are kept to a minimum here, though, and often warfare is the quickest and easiest solution to any kind of stalemate. 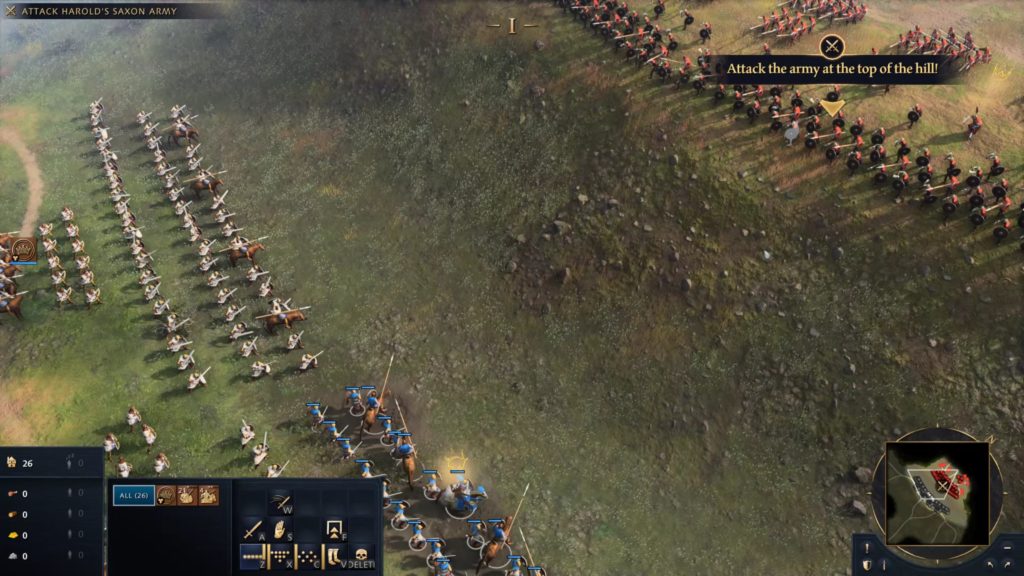 Age of Empires IV, then, feels like something of an effortless masterclass in planning and waging war. There’s not much evidence of Relic even attempting to innovate or take risks. Yet it still seems to stand shoulders above many of its contemporaries. “Forget all that fancy guff,” it seems to say. “Let me show you how it’s done.”

And by and large, that’s exactly what it does. Some quality of life improvements would be nice but are no means necessary. Extra factions and maps are sure to come despite the already robust launch package, so it’s hard to find any particularly damning complaints. Those expecting some kind of revolution may be disappointed, and there are way more complex and, arguably, involving RTS titles available today. But Age of Empires IV is still a confident, deep, and hugely compelling example of how to do this right.

Could use better unit management
Largely plays it safe

Those expecting a revolution may be disappointed, but Age of Empires IV is still a confident, deep, and hugely compelling return.