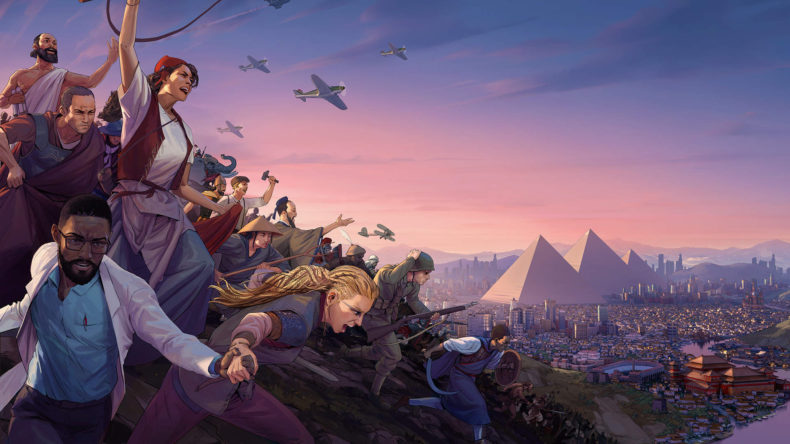 Humankind is a different kind of civilisation sim. I know that sounds like a marketing sentence (and in fact, it probably has been featured), but it’s true. I’ve played my fair share, too. More than, actually. From Sid Meier’s Civilisation, through Age of Empires, Planetfall, Crusader Kings, Stellaris… I wouldn’t go far enough out on the limb to say that Humankind is better, necessarily, but it feels unique.

Perhaps the biggest deviation is that you don’t pick a culture at the beginning and run with it. In Humankind, humanity itself is your civilisation. You begin every game as a nomadic tribe with no home and no plan. You’ll move your little troop of tribespeople around the world looking for food, animals to hunt, and curiosities to spur your fledgling nation into its first tentative steps. After establishing an outpost and then your first small city, you’ll be allowed to choose a culture. 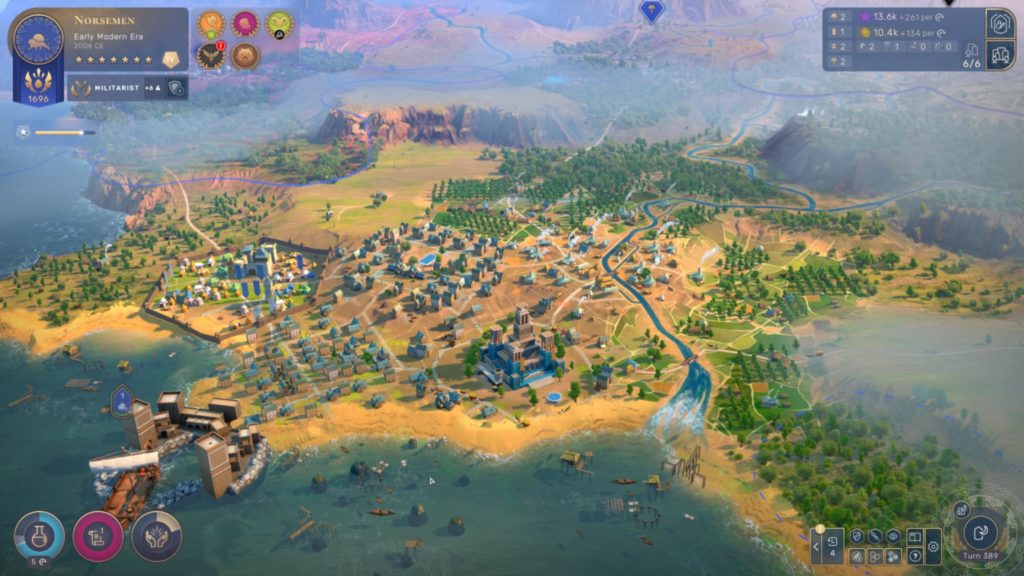 Humankind: A civilisation sim with a difference

There’s a lot to choose from too. From the Zhou or the Egyptians, to the Assyrians or Phoenecians, and each has their own look and city style. While this doesn’t sound like such a departure, the beauty of Humankind is that you don’t have to stick with your choice. Each race and culture brings its own Civic ideals, potential religions, military units and aspirations. Once you earn enough “Era Stars”, you can transcend to the next era. And here’s where you can make a sharp right turn into any of the other cultures. Once you do this, the two combine, sometimes synergising in interesting ways.

CHECK IT OUT: War for Wakanda brings the best Avenger to the fray

For example, your cities don’t only produce districts and buildings. They also research and instigate “Infrastructures”. These include national and cultural skills like fishing, debating, writing, and irrigation, or city improvements such as libraries, universities, barracks or various marketplaces. These in turn can lead to new innovations, city tiles, or even further infrastructures. City tiles include market quarters, makers quarters, farms, animal sanctuaries, defensive rally points for your armies, and a host of other essentials and, well, non-essentials.

You won’t have to worry about setting up harvest routes to gold or iron nodes, either. If you claim a territory with a potential mine or other gather point, you can set up an Artisan’s Quarter to make use of it. You can also “buy” resource nodes from your political allies. These nodes are indispensable once you have them, as they are required for creating and upgrading military units, or for researching certain infrastructures. Iron, saltpetre, incense, copper, horses, aluminium – these resources and more will become the driving goal behind a lot of your expansion. 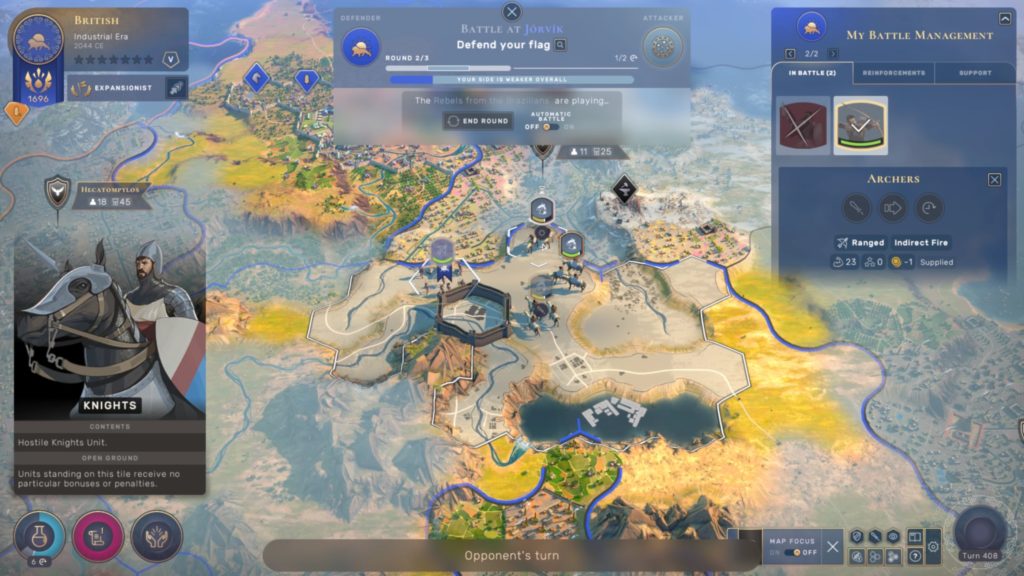 Of course, claiming and expanding territory leads to conflict. While you can set the enemy AI to passive if you want to, the default mode is the opposite. You’ll regularly be approached by other leaders, sometimes to form alliances, sometimes with ludicrous demands. Sometimes they just want to trade, or open a trade route through your territory. You can customise all of them, if you wish, right down to their looks and emblems. Unlike some civilisation sims, Humankind doesn’t beat you over the head with war. Now and then you’ll find yourself in direct conflict, and if you’re not careful, enemies will occupy your towns. If they take them, they also get the territory and any resources therein. Unless you’re confident of winning, it’s better to avoid warfare altogether.

Regardless, armies you use to explore, whether land-based or seafaring, will often end up fighting. Mercenary bands roam the lands, and will engage you on sight. Combat is fairly basic, a simple case of which side has greater numbers and unit strength. There’s an element of random number luck in there too, as sometimes you’ll go in with a far superior force and still lose. Despite the simplistic nature, battles for land or survival are still tense affairs. I’d advise not choosing “Instant Resolution” though, as the luck of the roll seems to be against you. 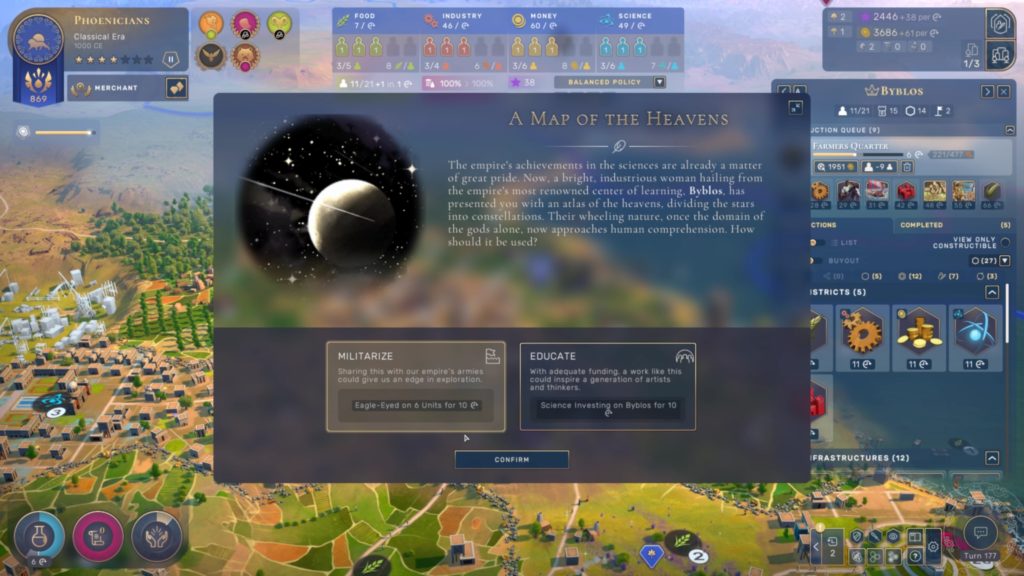 Though, you can always choose to play multiplayer and face off against other people. Playing a few games pre-release I got lucky, as most people are roughly as clueless as I am. Give it a few months and there will be some very dangerous armchair generals around. The multiplayer looks and feels almost identical to the campaign, with one major caveat: other people are crafty bastards. While the AI follows routines based on programmed personalities, people don’t. Players will lie, concoct schemes behind your back, and enact unpredictable campaigns against you. It makes for a much more dynamic, but potentially more frustrating, experience.

There’s a great deal to manage in Humankind, as you can imagine. Time doesn’t pass in years; instead, it’s based on turns. Each turn you can move all your units, select new infrastructures or buildings to work on. You can begin recruiting military units, conduct political meetings, and assign new technology research. Although the first game you launch into will be endless, any new game will have a set number of turns (up to 600) before the game “ends”. Victory conditions include winning the Space Race or being the last nation left standing atop an empire of subjugated people. Each new game allows you to set parameters such as world-size and geography, allowing for a unique starting point each time. 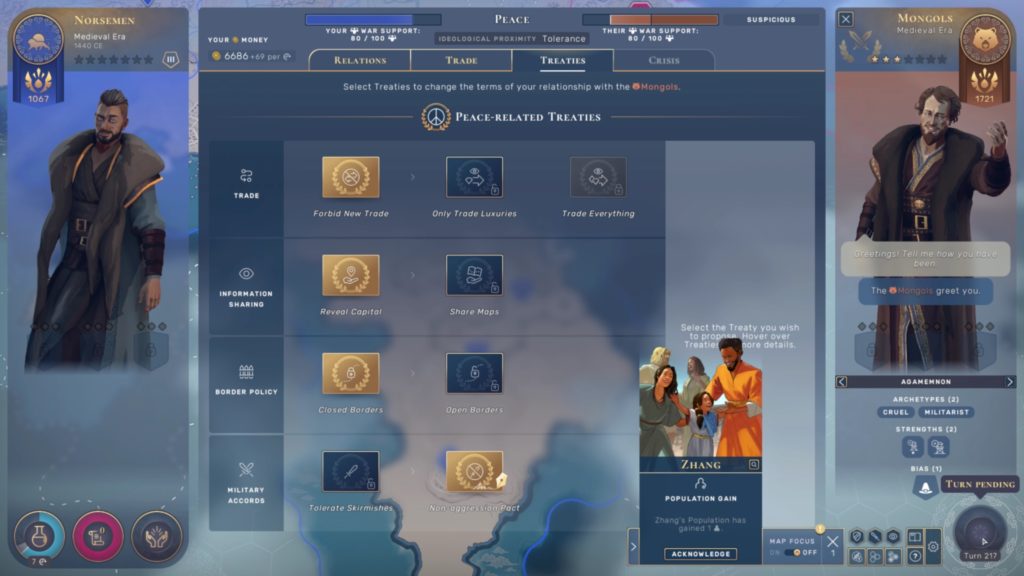 City well-being is based on Stability, which can be affected by anything from natural events to war, or bad decisions on your part. As you advance you’ll unlock “Civics”, which are binary choices concerning rules, religion, law, and government. For example, do you want free speech or censored speech; do you want a multicultural society or something more inward-facing. Should your government share power with your churches, or impose national atheism?

These choices all compact, synergise, or conflict with one another, creating a truly unique nation with every playthrough. By the time you reach the late game eras, you’ll have something that functions despite any choices you make, but may not prosper if you made the wrong ones. You can use national games, festivals and religious holidays to appease your people, or rule with an iron fist to get results. Either way, these decisions are yours to make and will eventually lead you either to the stars or to ruin.

It’s toward the latter eras that things begin to make less sense. It’s possible to still have your people living in Tudor houses while your nearest neighbour is in skyscrapers. And despite building high-tech train stations, modern city blocks and even planes, there are still horses and carts trundling round your buildings. It’s distracting and very odd, but symptomatic of being able to research technology so haphazardly. 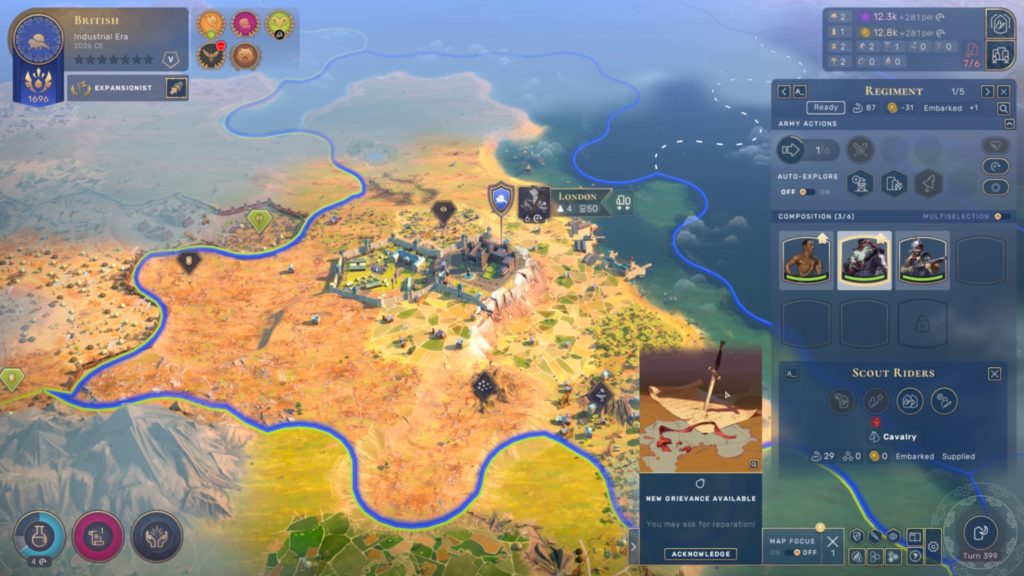 Humankind looks lovely, though, and tiny details make a wealth of difference. Birds and wildlife wheel and frolic; minute people go about their business. The bright, colourful aesthetic and likeable narration combine to create a sense of something like whimsy. I did, however, hit a few snags. Sometimes on loading in, your cities will take several turns to become fully visible. And more than once the world leaders completely changed. Oh, and it has a tendency to eat your save games, which happened to me and cost me about three hours of expansion. Hopefully these will be ironed out at launch or soon after.

Having played so many civ sims over the decades, it takes a special one to really get my attention. Recently the likes of Per Aspera and Imagine Earth have taken the kind of chances only indie games take, but Humankind seems to tread a line between those riskier ventures and the more established franchises like Sid Meier’s. Playing it is both deeply relaxing and yet mentally stimulating, requiring you to think and plan but not constantly hitting you with war and disaster. The option to sculpt a nation from so many real-world cultures is genuinely exciting. The creative scope is immense, and I’m sure people will forge incredible things once it launches.

Despite a handful of technical issues that should be patched out quickly, Humankind is an effortlessly enjoyable, truly innovative civilisation sim. There are some cracks in the shiny veneer, for sure, but on the whole it’s a great experience with almost endless replayability. Oh, and the theme music is absolutely stunning, too.

There are some cracks in the shiny veneer, for sure, but on the whole Humankind is a great experience with almost endless replayability.