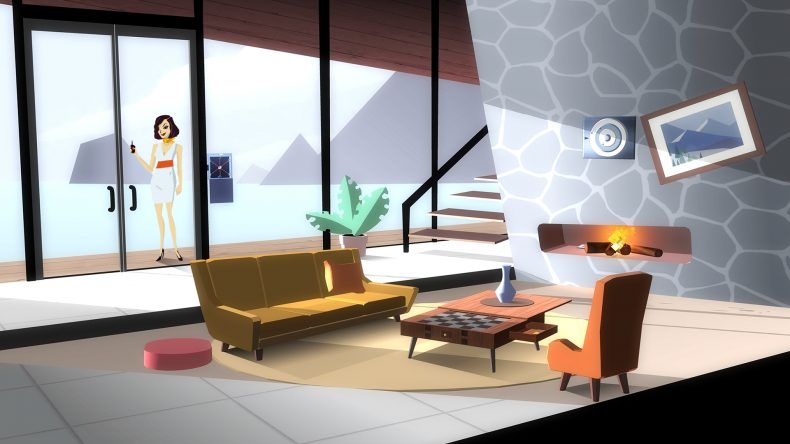 Feedback in games is important. Letting a player know when they’ve done something right is not only crucial for instilling a sense of reward but also to ensure that they don’t waste time repeating actions over and over under the assumption that what went before was incorrect.

Agent A is a puzzle game similar to Fireproof Games’ The Room series. Granted it’s considerably less spooky, but moving from place to place, piecing together the narrative and interacting with objects to solve puzzles is instantly familiar. Anyone who’s played a room escape game or even a point and click adventure will be well versed enough to understand just what Agent A is asking of them.

The game has been on iOS and Android for a while as an episodic series and finds its way to home consoles just as the fifth and final episode comes out. You play as Agent A and are infiltrating the home of a spy by the name of Ruby La Rouge. Even for a spy Ruby’s house is inundated with gadgets, gizmos and obtuse mechanisms which would surely confuse and frustrate a resident let alone a guest to the property. Accessing Ruby’s postbox alone requires you to solve five puzzles beforehand, a bit of an issue for anyone just to get your hands on your mail. Stepping away from the frankly silly idea of someone deliberately scuppering a comfortable home life to ensure the frustrations of visitors, puzzling in Agent A does have a natural flow to it. A solution grants items or clues to something else and normally links to something you noticed earlier, so now you know you can go back and solve what you couldn’t before. This is where feedback comes in, just a line of dialogue here, a noise a visual cue, all of these are implemented to make sure that when you solve something, then you know.

That’s not to say that Agent A is a challenging game though. I managed to get through the game in a pretty short time because the puzzles are pretty simple, provided you ensure you click on pretty much everything and obtain all the clues. There was one puzzle in chapter five that caused me considerable consternation due to a lack of feedback when I solved it, it’s probably my own fault really, but without that all important notification I wound up lost for nearly an hour. Thankfully that was the only time this happened and it was right at the end of the game too, if it had come sooner I’d probably have been less annoyed.

You won’t feel quite like a secret agent as you try to untangle Ruby’s web of doohickeys, but the game’s got a neat Art Deco vibe to it which lends the cutscenes a nice charm. Couple this with the suitably 80s spy soundtrack and you have a game that echoes classic spy films admirably. There’s one inconsistency between chapters two and three where the sound bugs out and goes a bit crackly, but I didn’t notice this anywhere else. I was also playing on Switch so it might just be localised to that console. Speaking of Switch it should be noted that the game does allow for the same touch screen implementation of the iOS and Android versions, however I played the entire game with the joycon controls as I just found them to be much more friendly to use. PC will obviously use a mouse, but the joypad interface is easy enough to use so PS4 and Xbox One players won’t lose out with their versions. For this you have a reticule that you move about the screen, point at something and press a button to interact. Items you pick up are added to a translucent menu bar on the right hand side of the screen ready to be used should the situation call for it. The reticule moves at a decent lick and if the item can be interacted with you’ll either pick it up or get a comment from Agent A, so you’ll always know if something can be ‘used’ so to speak.

If you’re someone who finds the Room games a bit too creepy then this is a great game to play if you’re into narrative puzzle adventures. Agent A is not too taxing while also providing a decent work out for your grey matter. You’ll want to ensure you’re taking screenshots to refer back to later just to ease the burden on the old memory, but overall you’ll never have the feeling that you’re brute forcing any of the solutions and Yak & Co. should be commended for that. Agent A won’t leave you shaken or stirred but will provide you with a few head scratching moments – but in a good way.

Agent A is more Johnny English than James Bond but there’s no harm in having a little fun as a spy.