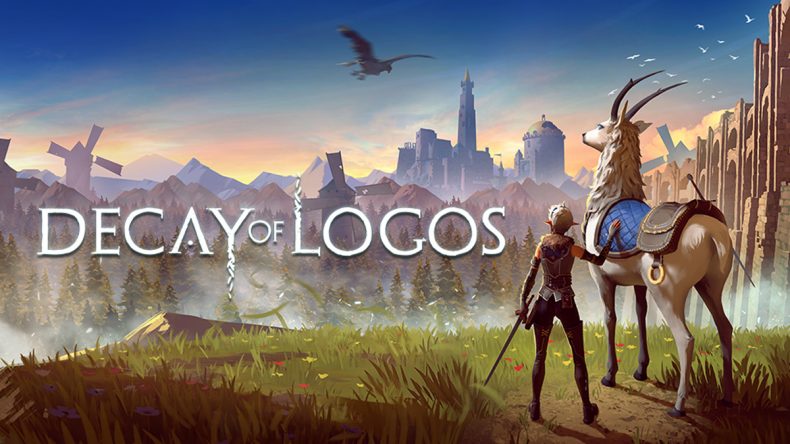 Before we get into this I want you to imagine something: Breath of the Wild and Dark Souls bump into each other and really hit it off. Things go well and some time later the love child Decay of Logos appears. Imagine the visual aesthetic of BotW with the combat and minimal hand-holding of Dark Souls. You can see Decay of Logos emulating the best of each, but saying it misses the mark would be generous. I know that Amplify have said that the experience they are offering is separate, but it’s hard not to make comparisons.

The adventure role playing game from Amplify Creations and Rising Star Games is a mixed bag for me. I love these games and live for anything that provides a challenge that pushes me to my limits. Decay of Logos did push me to my limits but not in the way I was hoping. I boot up the game and am immediately thrown into the middle of the village being attacked. Action from the off is a big plus for me. Only this action lasts less time than it took you to read this far. It felt like an abrupt stopping point rather than a natural one. I feel like there isn’t enough time to feel anything about the village being attacked. Props to Amplify, though, as it’s a dark way to start a game and I’m all for a bit of bleakness.

At that point, after a brief intro of Ada gaining the trust of your elk companion, we can get right into Decay of Logos. Unfortunately, this is where the trouble starts.

Now, Decay of Logos has taken the minimalist non hand holding approach to guiding you, which I’m fine with. The statue heads you’ll find give you the basics, like how to attack, parry, use items etc. but other than that you’re on your own. Learning how to attack was easy enough but the first of my issues arose when I came across the first set of enemies, of which there are very few. The combat style follows the Souls approach of attack, parry, dodge, attack but on a very basic level. You have your light and heavy attack and that’s it. Parrying (which admittedly is much easier to grasp compared with other games) and attacking works only occasionally thanks to a bug. Either my weapon goes through the enemy with no damage or parry registering or the same will happen when I am attacked. I fought an entire boss battle with no damage being registered to me until I was up to the last couple of hits.

The other combat issue came when it felt as though there was a delay in the button press registering. Many a time I’d hit the dodge button for it to either register late or not at all. This button delay also happens with mundane things. Approaching a ladder or one of the statue heads will bring up the prompt, in this case press X, and nothing would register until the fourth or fifth press. Every time.

I don’t expect the combat to be game changing or totally innovative but the same thing with one of five or so basic enemies can get quite tedious. I don’t want to come across like I’m totally bashing the game as it does have a few good points. The story, for example. While it’s not obvious what the main focus is from the start you get to piece together what’s happening as you progress, which I enjoyed. It’s like you get to play detective and each new section gives you that little tidbit to spur you on that little bit further.

The challenge of Decay of Logos is decent. I never quite felt like I was coasting or struggling in sections. It also has the added challenge of your stats dropping when taking damage. These can easily be reset at any of the various camping points but nothing comes for free. Apart from one of these spots you run the risk of being ambushed. If you don’t fend off the attackers then those are gonna stay low. I can’t leave out the major issues I’ve had with Decay of Logos. There are more bugs in this than ants around a picnic, one of the major examples being the environment rendering. I lost count of the amount of times an area just wouldn’t load. At one point I was heading back to a certain area for the floor to disappear and send me falling to my death. Another time I was climbing a ladder for that and the floor to vanish. Again falling to my death. At one point I get attacked by a slug monster that pushes me through the wall and you know the drill.

It wasn’t just the environment that had trouble loading though. Your trusty elk companion can be used for some puzzles but more than once it would just disappear. Vanishing wasn’t the only elk problem. In one section you need the elk to stand on a pressure plate while you move a lever – simple enough. Only a bug decided that the pressure plate wasn’t somewhere the elk should stand so it would keep walking until it bypassed the plate or it would circle it. This area should have lasted an hour or two. Thanks to this bug it took me days to get it to work properly.

There was also the occasional crash which forced me to reset but the frustration I was feeling due to these bugs made the break a relief. Overall the problems I came across turned a 10 hour game into a game that took over double that to finish.

I’m hugely disappointed as the final hour or so is bug free and totally enjoyable. I can see what Amplify are trying to do but the amount of issues this has takes away any enjoyment. I can only hope that future updates sort the various issues as the story and characters are enjoyable. Even if the enemies and combat can feel a bit repetitive.

Decay of Logos has an interesting story of a quest for revenge with some interesting supporting characters but is massively let down with the various amount of bugs that hampers progress and can cause major amounts of frustration.