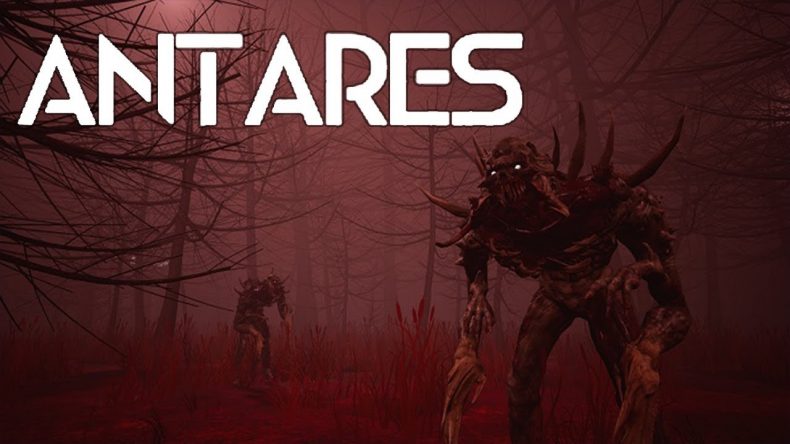 Making a game by yourself is a massive undertaking, so right off the bat Antares is an impressive feat. Running on the Unreal Engine, this sci-fi horror, first-person shooter looks rather impressive as you explore the Antares Facility. Floating out in space, orbiting the Antares star, this facility has gone dark. Literally: it’s pitch black in there. An infestation has taken root, turning the staff into mindless monstrosities and shambling corpses, and it’s up to you to figure out what has happened. It’s the only way you can find your way off the godforsaken station.

Antares starts you off with a brief tutorial, leading you to the hub to which you will periodically return, in order to upgrade your weapon and armour. As you exit the hub, the only light sources are the shining beacon of a holographic representation of the Antares star in the main hall, and your flashlight, which you’ll come to rely upon as you explore the game’s various areas. The darkness hides many different beasties that all want to eat your face. Or rip it off. I didn’t fancy stopping to find out which. Thankfully, the various monsters present on the Antares Facility aren’t particularly bright. The basic hordes, essentially skeletons stripped of all flesh, will shamble mindlessly toward you, but are only really a problem due to their numbers. Their numbers seem endless sometimes, often leading to panicked moments when you’re ambushed while low on ammo. The lack of AI affects all the other monsters too, including one type that looks very much like one of Dead Space’s Necromorphs. Until they hear or see you, they wander back and forth without purpose, and when they’re attacking, they simply pelt full-speed into you. There isn’t much in the way of attack animations, they continue to run into you as your health drains away. The lack of proper damage feedback is also a problem, leading to a few puzzled expressions as you’re suddenly presented with a “you died” message despite never really knowing you were in trouble.

Death isn’t a huge problem though, as you simply respawn back at the hub area, ready to try again. You can even decide to tackle a different zone, as your main objective is achieved simply through completing each zone within the Antares Facility, in no particular order. Each zone comes with its own unique story cues, told through audio logs scattered around, and through the mysterious voice that chimes in at set points. It’s very basic, but there’s enough mystery that you will want to find out what happened. You will want to keep playing, too, because there’s a “one more go” feeling to the loop. You’ll enter an area, usually greeted by a skeletal horde, and then explore its often labyrinthine layout, listening to audio logs and searching out upgrade materials. The thing that sets it apart from other games like it, is its use of sound. In particular, how important it becomes during Power Down Cycles. Periodically, the station’s power will cut out after a warning, and when it does you are completely vulnerable.

The station’s constant hum is gone during this time, so if you make too much noise you’ll draw attention to yourself. That means hordes. It becomes incredibly tense when you’re in the middle of fighting off a room full of monsters and the warning comes up that it’s about to go dark. If you’re still fighting when the power goes out, you’ll soon find yourself overwhelmed by hordes on all sides. It’s an interesting and particularly atmospheric mechanic, though after a while you do find yourself simply finding a quiet spot to wait until the power comes back on. It’s even possible to jump on top of some boxes, as nothing can climb up to get you.

It might have issues with its enemy designs and AI, but Antares is still a good game with some great ideas and a fairly effective gameplay loop. It has some excellent atmosphere, especially when the power goes out, but it’s a shame that a lack of polish sometimes mars the experience. That said, there is no denying that this one-man venture is still an impressive feat.

Antares is an impressive feat for one person and its gameplay loop is quite addictive, but it lacks polish in some areas and it takes the shine off an otherwise atmospheric, sci-fi horror.